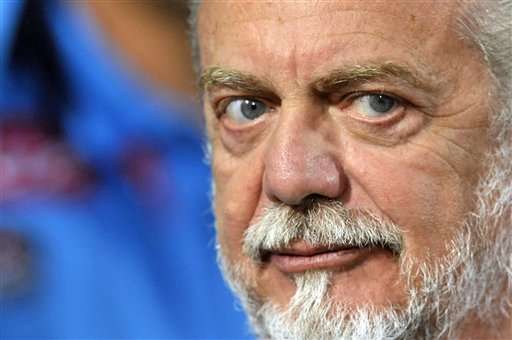 After returning from a business trip in Los Angeles, Napoli president Aurelio De Laurentiis sat down to speak to Antonio Giordano of Corriere dello Sport. You can find part of the original interview in Italian here. Below are some excerpts translated into English.

Upon returning to Italy and finding his club atop the Serie A standings: “I’m not surprised but also not exalted: I know that what counts is where you are at the end and that league positions become much more significant in March.”

When asked if the eight million euro release clause in Maurizio Sarri’s contract might be a risk to lose him De Laurentiis spoke openly; “Sarri and I have been in love with each other since we met and even more so now. With him, you can speak about anything. I hope that he stays with us for at least another 10 years. The release clause doesn’t bother me.”

De Laurentiis also had some strong words when discussing the state of Italian football today; “There is evidently a disproportion between clubs and a 20 team league is not the right way. There needs to be better economic results. I think about the sale of the TV rights abroad: Mr. Lotito (Lazio’s owner) should have made sure that there was absolute freedom, instead we find ourselves with Infront (Sports & Media) who went to offer the TV rights in London without there being representatives from any clubs. I am critical because I would like to see calcio improve.”

On the topic of Juventus and this season, the Napoli owner seemed somewhat hopeful; “After six consecutive Scudetti, there may be some anxiety. They have lost some important players over the last years, now Bonucci but earlier Pogba and Pirlo. I ate dinner in Los Angeles with [Alessandro] Del Piero, who is about to open a restaurant. He’s a delightful person.”

When asked to choose between the Scudetto and Champions League, De Laurentiis said, “Never put limits as anything is possible.”