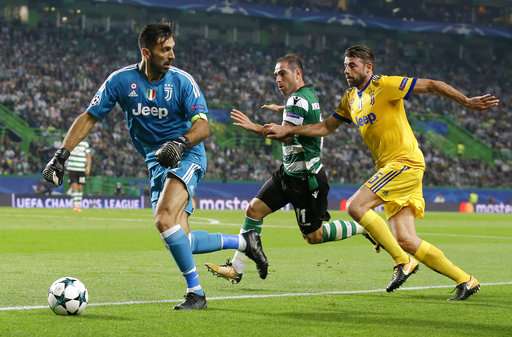 Max Allegri’s squad hasn’t seemed to hit its stride yet this season. After a convincing 2-0 victory over Milan, this past Saturday at the San Siro, the Bianconeri came out looking flat on their visit to Lisbon. Sporting CF came into this match winless in their last four Champions League matches.

Juventus were quite disappointing in the opening 45 minutes. Lackluster in possession, failed to create any dangerous opportunities and gave Sporting too much space on the counter. The Portuguese club deservedly took the lead in the 20th minute after Bruno Cesar pounced on a rebound inside the penalty box.

Even at the beginning of the second half, Juve seemed a bit lifeless, playing without any urgency. The hosts had two great chances to double their lead within a matter of two minutes, but Bruno Cesar and Bas Dost were unable to find the net. With the introduction of Douglas Costa in the 64th minute, Allegri’s side finally picked up the pace and started playing with some purpose. With Costa and Alex Sandro threatening down the left flank and Juan Cuadrado opposite, the Bianconeri started looking a bit dangerous.

The breakthrough would eventually come as Cuadrado elegantly fed Gonzalo Higuain inside the box and Pipita’s deft touch flew over Rui Patricio into the back of the net. A massive goal for the group standings as Juve now maintains a three-point advantage over Sporting. Higuain stepped up when most needed, finding a pivotal goal giving the Bianconeri an easier path to qualify from the group stage. While the point was massive, the performance was underwhelming.

“I am disappointed because the first half was ugly, the second was better, and we were a bit too chaotic. We should’ve been more organized,” Allegri told Mediaset Premium after the match. “We’ll keep the result tonight, which was the only good thing about the performance, really.”

Allegri’s decision to start both Mario Mandzukic and Juan Cuadrado on the wings, after they both started against Milan on Saturday, seemed a bit questionable. It was obvious once Douglas Costa came on that his impact was of vital importance, as it was it the return fixture against Sporting in Turin.

The right-back position remains a contentious point. With Stephan Lichtsteiner left of the UCL squad, Allegri has used Mattia De Sciglio, Andrea Barzagli, and Stefano Sturaro on the right side of defense. Only De Sciglio is a proper fullback and if can’t remain healthy the position will be an Achilles heel for this Juve side in the Champions League.

Despite the recent positive results, it still feels as if this Juventus squad is still leaving something to be desired. It feels almost as if they are still stuck in first or second gear. When or if they pick up will be essential to how their season pans out. If the Bianconeri have hopes of reaching another UCL Final, they will definitely need to improve their play and fix some tactical issues.