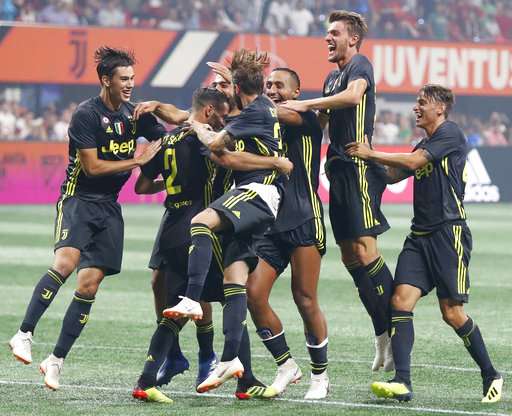 Italian giants Juventus were invited to participate in this year’s edition of the Major League Soccer All-Star Game in Atlanta, Georgia.

Following the massive success of Atlanta United’s inaugural season, the event was deservedly hyped up. A record MLS All-Star Game crowd was expected and the city of Atlanta delivered with a crowd of 72,317 at the Mercedes-Benz Stadium.

While the Juventus players who made the knockout rounds of the World Cup remained in Turin, the MLS side managed by Tata Martino, started the match quite well, enjoying the better of possession for the opening twenty minutes.

The opening goal came from a youngster, Andrea Favilli, who has been enjoying his time in America quite well. Matheus Pereira whipped in a peach of a cross from the left flank as the 21-year-old striker directed his header perfectly into the far corner. Favilli, who is set to join Genoa, bagged a brace against Bayern Munich in Philadelphia last week.

Juve’s lead would be brief as the MLS squad managed to equalize just five minutes later in a bizarre sequence. Wojciech Szczesny made a great initial save on a shot from Carlos Vela but the Polish keeper couldn’t get to the second ball before Ignacio Piatti who headed the ball over the face of the goal leading to a valiant header from Josef Martinez.

No irony was lost on the fact that the goal came from a former Torino striker. The former Juventus product himself, Sebastian Giovinco, came on in the 30th minute but didn’t have much of an impact on the game. The Toronto FC star’s major contribution was a lovely lofted pass to set up Ezequiel Barco for a volley, which was well saved by Szczesny.

A total of 15 substitutions were made at halftime. Allegri gave all his youngsters some playing time as the Bianconeri finished the match with only four senior team players on the pitch.

With the score even after 90 minutes, the match went straight to a penalty shootout. Juve was flawless from 12 yards out, with five fantastic spot kicks. Following Bradley Wright-Phillips’ miss off the post, Mattia De Sciglio coolly slotted home to continue The Old Lady’s undefeated American tour.

There was no doubt that the main storyline was in the city of Atlanta. Despite the heavy rain, a massive crowd came out for what was ultimately just a friendly match. The fans were also restless, creating a fantastic atmosphere. Soccer culture in Atlanta is something for American lovers of the beautiful game to shine a light on and look to as a beacon of hope.

“It was great to play in the Mercedes-Benz Stadium and a lot of supporters came and the atmosphere was incredible, it’s just unbelievable” Juve summer signing Emre Can said after the match.

Juventus head coach, Max Allegri, also expressed his delight saying, “I’m happy and satisfied to participate in this beautiful night because it’s a wonderful stadium with 70,000+ fans and because of the great enthusiasm to improve and carry calcio forward in America.”

“The lads did well. Playing on a turf field is not easy, it was important to finish the match without any injuries,” Allegri added.

Allegri also spoke regarding the big Milan-Juventus deal on the mercato, “This is the mercato, this is football. I think it is a fair deal for both Juventus and Milan. Regarding Caldara, I am sorry [he’s leaving] because he is a young lad along with Rugani and Romagnoli are the three best young defenders we have in Italy. Regarding Higuain, I would like to thank him for everything he gave Juventus over years and Milan are getting a great striker. Regarding Leo Bonucci, he returns to us after a year and he is an important player.”

Despite playing against the MLS All-Stars in Atlanta, the mercato stole the day’s headlines for the Italian champions.

Juventus will now travel to Washington D.C. to take on Real Madrid on August 4th at FedEx Field before returning to Italy to complete their pre-season.

Fiorentina in advanced talked for Mirallas