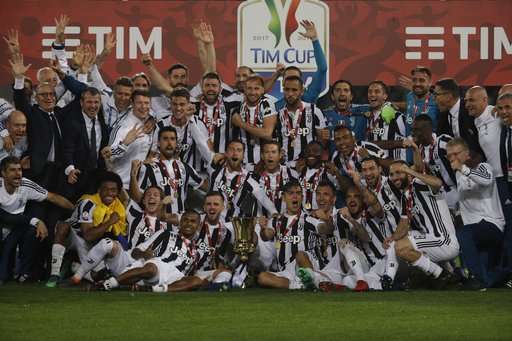 Juventus have won their 13th Coppa Italia title after defeating AC Milan at the Stadio Olimpico in Rome.

A scoreless first half was pretty balanced with both sides having their fair chances.

An eight-minute flurry in the second half opened up the match. Between the 56th and 64th minutes, Juventus pulled away to yet another trophy.

Medhi Benatia opened the scoring on a header from a corner kick taken by Miralem Pjanic.

Douglas Costa doubled the Bianconeri’s lead after Gianluigi Donnarumma failed to handle his shot from the top of the box.

Donnarumma then made another blunder only minutes later, dropping the ball in front on net allowing Benatia to score a tap-in.

The final goal was an own goal conceded by substitute Nikola Kalinic.

Missing out on a chance for Europa League qualification, Milan now need positive results in their final two league matches against Atalanta and Fiorentina.

Meanwhile, this is the fourth Coppa Italia title won by Max Allegri with Juventus.

The Supercoppa Italiana will be played between these two sides on August 12.

The Story of Andrea Silenzi: The First Italian To Play in England