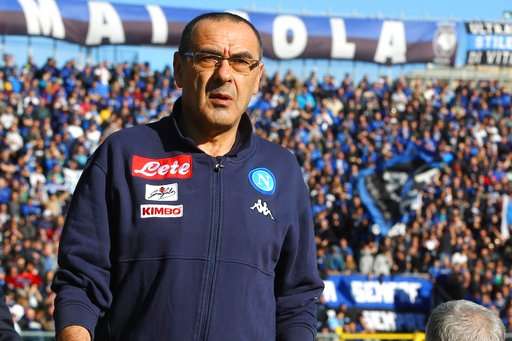 Only one league in Europe’s top five is looking interesting right now and that is Serie A. The other four are looking like their fates have already been decided. Usually, by this time, the Italian league has looked set to be decided too but this time it’s different. Napoli is sitting on top, a point ahead of Juventus while Lazio, Inter Milan, and Roma are sitting in 3rd, 4th, and 5th spot respectively with just two points separating the three teams.

Juventus, who have won Serie A consecutively for the past six seasons are currently in the 2nd spot. Napoli are sitting on top, having lost just one match so far. Last season, Napoli lost only four matches, less than any other side in Serie A including the champions Juventus, who lost five.

So what has changed at Napoli? The answer is, “Maurizio Sarri.” Now considered as one of the most exciting teams in Europe, Sarri has injected a new footballing philosophy in the Partenopei known as the ‘Sarri Ball’. Similar to the famous tiki-taka style, the attack starts from the back where the colossal Kalidou Koulibaly marshals the Napoli defense. The ball finds its way into the midfield where they have a Pirlo-esque player in the likes of Jorginho. The deep-lying playmaker is an important part of this newly shaped Napoli team. The ball is then worked forward into attack where the trio of Insigne, Mertens, and Callejon wreak havoc on the opposition defense with Hamsik, Napoli’s all-time record goalscorer, sitting behind the trio.

Though the dazzling trio of Napoli rightly gets the most acclamation from crowd and pundits, their defense is equally as impressive. Napoli has conceded the least amount of goals in Serie A so far this season. Veteran goalkeeper Pepe Reina is still producing an impressive string of performances even at the age of 35, while the duo of Koulibaly and Raul Albiol have made a formidable partnership at the back. The two fullbacks, Ghoulam and Hysaj have both been equally superb in both defense and attack. Unfortunately, Ghoulam has only seen limited time on the field this season after sustaining a torn ACL against Manchester City.

The midfield trio of Jorginho, Allan and Hamsik provides the perfect bridge to work the ball from the back to find the front three going forward. While Marek Hamsik is rightfully Gli Azzurri’s legend as their record goalscorer, surpassing the legendary Maradona and also ranks 3rd on most appearances, it is Jorginho who has produced the most consistent and impressive performances in the midfield hence attracting the attention of top European clubs. With Hamsik in a more attacking role and Jorginho playing more of a deep-lying playmaker role, Allan acts as a box to box midfielder.

The Italian left-winger, Lorenzo Insigne, might be short in height but his skill set makes up for that. A mixture of majestic dribbling and the ability to score from outside the box makes him such a big threat on the left-hand side. On the right-hand side is the Spanish winger Jose Callejon. The lesser known of the attacking trio, the Spanish winger is an integral part of their attack, moving into spaces to trouble defenders, drawing their attention leaving other players free in space. The player who has benefited the most in this transformative Napoli side has to be Dries Mertens. The winger turned striker scored an astonishing 28 goals last season further assisting nine. Some of the goals he scored were astonishing, eye-catching and mesmerizing showing the confidence the 30-year-old is playing with.

The 4-3-3 formation that Sarri brought with him has been nothing short of a revelation for this Napoli side. The style of football they play has been praised all over the footballing world even by managers including Pep Guardiola. It’s been 25 years since Napoli last won the title but the belief and style that Sarri has brought into this team has turned them into serious title contenders this year. If they continue to play with the same confidence as they are now, then there is a strong chance that they can end their trophy drought this year.