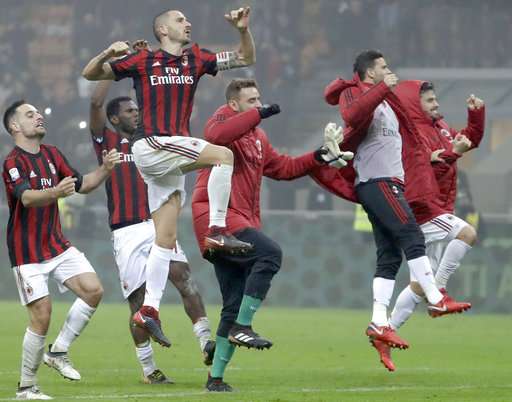 Have Milan finally turned a corner? It’s too soon to tell, but what can be established is that Gennaro Gattuso has overseen a mini-revival recently which started with the Coppa Italia win against Inter and then includes four Serie A games unbeaten. The last three are wins, against Crotone, Cagliari and most recently, Lazio. The streak has moved Milan up to seventh, with a legitimate chance to salvage something this season with sixth-placed Sampdoria just three points ahead.

The most recent win was the most impressive; Lazio came into the game in great form which included 13 goals in their last three games. But Milan impressed, with the young Patrick Cutrone leading the line, up front. It was Cutrone who gave Milan the lead when his header went in after just fifteen minutes. Shortly thereafter though, Lazio showcased their attacking quality when a swift move ended with Adam Marusic turning inside on his left foot and effortlessly placing the ball out of Gianluigi Donnarumma’s reach.

Milan would come back just before halftime when Giacomo Bonaventura headed in Davide Calabria’s cross to restore the Rossoneri’s lead. In the second half, Lazio tried to find an equalizer but Gattuso’s men held firm and kept their winning run going. The run of good form, if it continues, actually might make an outside shot of Champions League football possible given Inter and Roma’s horrible form. It’s ten points up to Milan’s city neighbours. Surely it’s too far?

Napoli keep winning, stretching their winning run to six as they came from behind to beat Bologna at the San Paolo. Bologna took the lead within the first minute when a quick counter-attack ended with Rodrigo Palacio heading in from close range. Napoli quickly rallied, when Mario Rui’s cross after a corner was turned into his own net by Ibrahima Mbaye. Dries Mertens then gave Napoli the lead from the penalty spot in the 36th minute before ending the scoring with his second, ten minutes into the second half with a beautiful curling effort.

Juventus also keep winning, this time they beat Chievo away after goals from Sami Khedira and Gonzalo Higuain. It wasn’t very exciting from the Bianconeri, but it was three points and they keep pace with Napoli.

Roma’s disastrous form continues after Sampdoria came to the Olimpico and won thanks to Duvan Zapata’s late strike. Roma have fallen into fifth, but remain within touching distance of fourth due to Inter’s similarly poor run. Eusebio Di Francesco really has to fix this rot at the moment, because even if they play decently at times, they desperately need a win.

Inter thought they had finally secured a win again after leading SPAL away from home thanks to an own goal by the home side’s Vicari. SPAL dominated the second half and kept pressing forward, but Inter managed to keep them out long. In the end, though, Mirko Antenucci’s cross reached Alberto Paloschi who steered the cross in and ended Inter’s hopes of a win.

Crotone and Cagliari are in desperate need for wins. Both teams likely fancied their chances when going up against each other at the weekend. Marcello Trotta gave Crotone the lead from the spot and Cagliari went a man down early in the game. However, Luca Cigarini stepped up with a fantastic free-kick to earn the visitors a point to take home to Sardinia.

Udinese continues to impress under Massimo Oddo. This week they beat Genoa away from home thanks to Valon Behrami’s left-footed strike. Udinese are now ninth, ahead of the likes of Torino, Fiorentina and Bologna. Very, very good work done there at the minute by Oddo and his men.

Hellas Verona have rarely made their fans happy this season while Fiorentina under Stefano Pioli have been quietly impressive at times. La Viola’s issue have been consistency, and when Hellas came to town they definitely had one of those days. Hellas scored three in the first half, including two from 17-year-old Moise Kean, before Gil Dias finally brought one back for Fiorentina. Alex Ferrari made sure of the win for Hellas when making it 4-1 quickly thereafter. Fantastic win for Hellas.

Atalanta really are superb. In recent matches, they’ve beaten the likes of Milan and Roma away from home as well as knocking Napoli out of the cup. They’re also through in Europe and eighth in Serie A after beating Sassuolo 3-0 away at the Mapei Stadium. It was a mirror of the same game last season with the same scoreline. The goals were scored by Andrea Masiello, Bryan Cristante, and Remo Freuler. They’re four points off Sampdoria in sixth. Can they make Europe again?

Walter Mazzarri’s revolution at Torino is becoming significant now, as Toro beat Benevento 3-0 and made it three games unbeaten since Mazzarri took over. They’ve only conceded once in those three game while scoring seven. And so far there has been no sign of the brilliant duo Adem Ljajic and Andrea Belotti. The goals on Sunday were scored by Iago Falque, Mbaye Niang and Joel Obi, all of them in the first half.

The youngster impressed in Florence and scored twice for Hellas in their superb 4-1 win. The 17-year-old is having an impressive season on loan in Verona and will return to Juventus in the summer as a man.

When most other teams at the bottom have changed coaches when struggling, Hellas has kept faith in Fabio Pecchia. On Sunday, they were rewarded for their faith with an impressive 4-1 win at Fiorentina.

Mertens scored twice in Napoli’s 3-1 win but it was his second that caught the eye. Cutting in from the left, Mertens curled the ball superbly into the far corner to give Napoli a two-goal cushion.