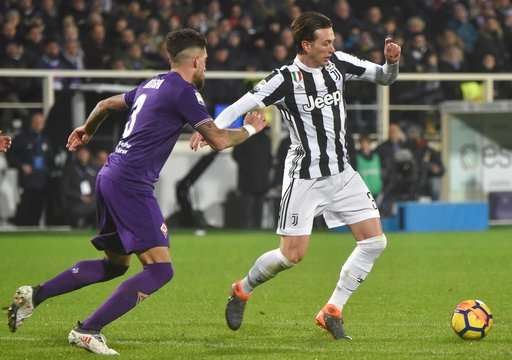 It had to be him. Fiorentina fans were outraged in the summer when homegrown star Federico Bernardeschi left Florence to join their bitter rivals Juventus. The rivalry between the two clubs, mostly from Fiorentina’s point of view, is very bitter. It dates back to a title race several decades ago which was later followed by the Fiorentina talisman Roberto Baggio moving to Turin. On Friday night, Bernardeschi returned to Florence for the first time and was met by boos and whistles throughout. The home fans became even more enraged when Bernardeschi scored the opener from a free-kick which ultimately gave Juventus the win.

Fiorentina really impressed despite the 2-0 defeat. Stefano Pioli set his team up in a fluid shape which altered between a 4-5-1 when defending and 3-4-2-1 when attacking. Fiorentina were superb when pressing Juventus high up the pitch, which caused plenty of turnovers and led to Fiorentina quickly regaining possession. With the ball, Fiorentina’s passing was really good and the movement of Chiesa into the centre from the left wing was critical as it helped establish a 4 vs 3 advantage in midfield. Fiorentina used this advantage well to reach threatening positions in behind Juventus’ midfield but the decisive touch was often lacking. They were also unlucky. In the middle of the first half, they were awarded a penalty when Giorgio Chiellini handled a cross into the box. After VAR reviews, the decision was overturned and instead a debatable offside prior to the cross was given. Gil Dias then hit the post in a swift counter-attacking move but Fiorentina failed to take the lead.

Then came Bernardeschi. In the second half, the Italian won a free-kick just outside of Fiorentina’s penalty area. He stepped up himself and curled the ball out of goalkeeper Marco Sportiello’s reach to give Juve the lead. It just had to be him. Fiorentina then pressed on for an equalizer but were denied by a splendid Gianluigi Buffon save on Cyril Thereau. Chiellini then dribbled into midfield with a few minutes remaining and played a through ball for Gonzalo Higuain who made it 2-0. Fiorentina performed well but left their home ground empty-handed. The fans surely cursed the missed opportunities as much as they cursed their former star.

Juve went top but only remained there for 24 hours as Napoli came from behind to crush Lazio 4-1. Lazio impressed in the first half and looked comfortable after Stefan De Vrij had given them the lead. Just before halftime though, Jorginho played a superb pass into the run of Jose Callejon who equalized. In the second half, Napoli stormed out of the blocks and a Wallace own goal was quickly followed by Mario Rui’s shot which deflected in off of Piotr Zielinski. A superb passing move then saw Dries Mertens finish the scoring to complete a 4-1 win. It was a great response and performance from Napoli, but there must have been frustrated faces in Lazio’s dressing room after three straight defeats which has seen them drop into fourth.

That is because of Inter’s long-awaited win at home to Bologna. Eder opened the scoring early on, but a Miranda mistake led to Rodrigo Palacio equalizing. Yann Karamoh then introduced himself to San Siro with a superb solo goal to earn Inter a huge win which lifts them into third.

Roma also responded with a win after weeks of poor form. But they went behind at home to Benevento when Guilherme opened the scoring. Goals from Federico Fazio, Edin Dzeko and two from Cengiz Under turned the game around, and despite a consolation from Enrico Brignola, Roma won 5-2 when Gregoire Defrel scored from a penalty. The race for third and fourth looks like it’ll go down to the wire.

Can Sampdoria get involved? It seems far-fetched, but their form suggests so. At home to Verona, they won again, 2-0 in a comfortable home win. Edgar Barreto gave them the lead and Fabio Quagliarella added to it with a late penalty. They’re six points from fourth.

Milan have really picked up form now but probably remain too far away from fourth to get involved in that battle. Still, they played really well and won 4-0 at SPAL. Patrick Cutrone scored twice while Lucas Biglia and Fabio Borini added to the win late on. Gattuso seems to be doing everything right at the minute.

Crotone thought they had clinched a much-needed win when Rolando Mandragora scored with twelve minutes remaining at home to Atalanta. But with only three minutes left, Jose Luis Palomino equalized from a set-piece. The late goal gives a boost to Atalanta ahead of their European commitments in the week but Crotone must feel downbeat when they really needed a win.

Genoa have managed to get away from the bottom under Davide Ballardini and after beating Chievo 1-0 in Verona thanks to Diego Laxalt’s strike they are ten points above the relegation zone. Splendid work from the coach who has lifted the club to 12th and probably safe away from danger.

Sassuolo and Cagliari both needed points when they met at the Mapei Stadium, and they both got one after drawing 0-0. Not much else needs to be said about that clash.

Walter Mazzarri’s revolution continues with another win, this time 2-0 at home to Udinese. Nicolas N’Koulou got the winner but the big talking point was Andrea Belotti’s brilliant solo goal to break his goal drought in his first start after his injury troubles. With him firing and Mazzarri’s strong defense, Torino will continue to push up the league. Spare a thought for the brilliant Adem Ljajic who always lights up games, who seems stuck on the bench when Mazzarri looks for stability and functionality over genius.

Cengiz Under, AS Roma

The Turkish 20-year-old has had a great week after scoring at Verona last week and his stunning performance yesterday when he scored two and made one in Roma’s 5-2 win.

As stated above, Ballardini has lifted Genoa from trouble, largely thanks to two straight away wins in the space of six days after beating Lazio on Monday and then Chievo on Sunday.

The move was superb from start to finish, the quick passing we’ve seen so many times, the cool, clever pass from Zielinski and then the nonchalant outside of the boot flicked finish from Mertens. Enjoy.