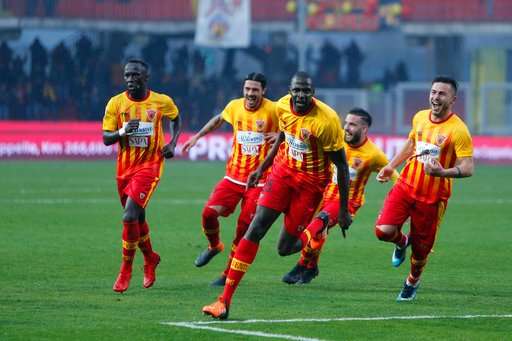 The craziest game of the week was certainly Benevento-Crotone. The home side eventually won 3-2 to clinch their third victory of the campaign.

The game swung back and forward during the ninety minutes and saw plenty of actions. It all kicked off when AC Milan loanee Giovanni Crociata opened the scoring for the visiting Pitagorici from close range with a simple tap-in. Benevento then rallied and equalized with eight minutes left in the first half. The goalscorer was the Brazilian midfielder Sandro, formerly of Tottenham and Queens Park Rangers in England, who headed home from a corner. Seven minutes into the second half, Benevento took the lead when Nicolas Viola scored to give the home side the advantage. Crotone showed their character though and came back with an equalizer with only fifteen minutes left when former Pescara midfielder Ahmed Benali got the final touch. But it wasn’t finished there since Benevento’s Cheick Diabate found his moment to earn the home side a vital win in their bid for the great escape. When the ball hit the net only one minute remained which didn’t give Crotone enough time to find a response.

The win leaves them eleven points behind Crotone above the relegation zone with 13 games to go. Surely it’s too much, but a few more and they will have given themselves a fighting chance to stay up. For Crotone it was a horrible defeat given the two clubs ahead of them, Sassuolo and Cagliari all lost as well as SPAL below them. They remain four points above the relegation zone but this will go to the wire. Benevento go to Inter next week, while Crotone have a massive must-win clash at home to SPAL, the team straight below them in the table.

Juventus bounced back from the disappointment in Europe by winning the Derby della Mole against Torino. Alex Sandro got the only goal of the game after splendid work down the right by Federico Bernardeschi. It was Walter Mazzarri’s first loss in charge of Toro. The win put the pressure on Napoli…

but Maurizio Sarri’s men handled the pressure by beating SPAL 1-0 thanks to Allan’s early goal after a brilliant passing move. Napoli’s football isn’t as fluid as it was in the beginning of the season, but they still manage to win their games. Thirteen to go and they still have it in their own hands to secure a long-awaited Scudetto.

The Gattuso revolution continues in the red and black half of Milan as the Rossoneri beat Sampdoria 1-0 to move up to joint sixth with Samp. Giacomo Bonaventura got the only goal of the game and his form has improved, as has every player’s, under Gattuso’s leadership. Can they catch Inter?

It’s a legitimate question given Inter’s immense implosion. This weekend they lost 2-0 at Genoa after a comical own goal when Skriniar cleared the ball onto Ranocchia and into their own net before former Inter treble winner Goran Pandev scored the second in the second half. Inter have one win since the beginning of December. It’s remarkably poor and the third season in succession where they seemingly all of a sudden lose their form and go on a torrid run. After Lazio’s win on Monday night, Inter dropped out of the top four. Seven points separate the city neighbors.

Cengiz Under scored his fourth in three matches when he opened the scoring in Udine. Roma eventually won 2-0 after Diego Perotti added to the lead. Roma have found form again with three straight wins and go into their Champions League clash with Shakhtar with confidence. Udinese’s magical form has dropped off, but that was expected to happen at some point.

Chievo-Cagliari doesn’t sound as fun as it was when ten crazy minutes brought three goals and a Chievo win. Emanuele Giaccherini came on and scored a superb free-kick to open the scoring before Roberto Inglese’s splendid solo goal added to the home side’s lead. Leonardo Pavoletti brought one back for the visitors, but Chievo grinded out a big win to lift them away from trouble, at least temporarily.

Fiorentina impressed against Juventus recently and continued at Atalanta where they started well and opened the scoring through Milan Badelj. Andrea Petagna leveled the score just before halftime though, so two of Italy’s best tactician’s, Gian Piero Gasperini and Stefano Pioli, shared a point.

Ciro Immobile’s brace gave Lazio a much-needed win against Hellas Verona in Rome on Monday night. Lazio hadn’t won in five while losing four. The win lifted them above Inter and into fourth. If they can stabilize their form ahead of the run-in then they look well-set for a Champions League place.

The striker took his season tally in Serie A to 22 goals with his double against Verona. The side had endured a poor run of form without the marksman and his return will prove vital in their quest for the top four. His 22 goals and eight assists this season sees Immobile top both the goal scoring and assist-making (joint with Verdi, Candreva et al.) charts.

Allegri overcame a difficult situation away at neighbors Torino who came into the game in great form to secure a derby win. The game was extra difficult for Allegri with Mario Mandzukic’ injury and then Gonzalo Higuain’s injury in the 15th minute to leave Juve without a centre-forward. Allegri opted to move Douglas Costa to the focal point of his attack with Federico Bernardeschi coming in on the right and Alex Sandro staying on the left wing. Bernardeschi then beat his opponent and set Sandro up for the only goal of the game. Allegri’s tactical knowledge keeps Juve in the title race despite their injury problems mounting.

Regular readers will have identified my love for free-kicks by now. Pulgar’s effort was sublime, and just edges Giaccherini’s goal for Chievo.

Bernardeschi and Higuain pick up injuries