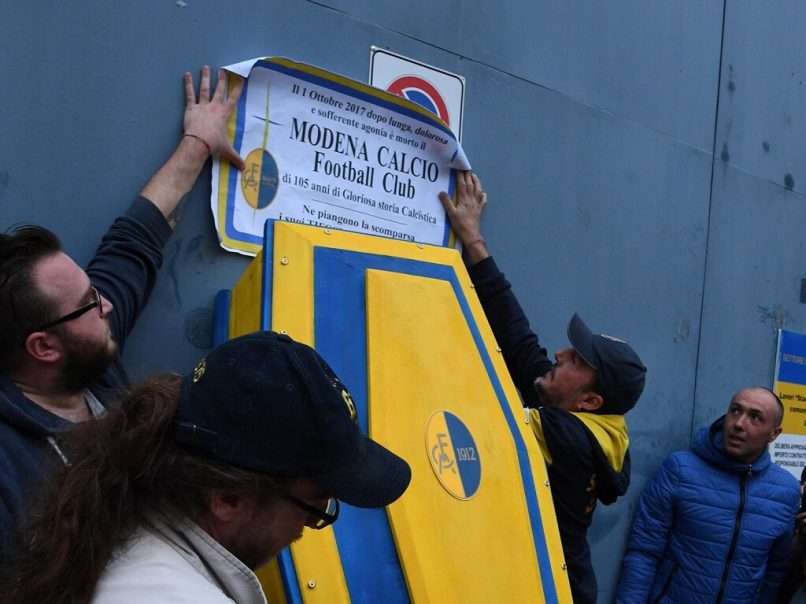 The video doing the rounds online shows an old man weeping uncontrollably. The grief is clear for all to see, as he reaches out to lightly touch his Reggiana flag that adorns the gate. The news has filtered through, that the club he loves so much is no more; lifeless and bankrupt.

He, however, would not be the only one to feel such pain that day. As some 140 kilometres away, also in the Emilia-Romagna region, fans of Cesena would also learn of their club’s demise. The sorrow did not stop there as later that evening from the heel of Italy it was announced that another historic club of calcio, Bari, have also threw in the towel.

Meanwhile, to the north, only hours away, but light years in the football world, Beppe Marotta beams a smile so bright, if harnessed it could power Turin for a week. It is after all Cristiano Ronaldo day, the day that the five-time Ballon d’Or winner and one of the greats to ever play the game completes his medical and is welcomed into the bosom of La Vecchia Signora.

Many see this as sign that calcio is back, once again attracting the biggest names in world football to its shores. For Juve, it is a statement of their intent on a global scale as the penthouse of the Italian game. Serie Their residence only grows more lavish, while those occupying the lower levels of the foundation are looking ever more vulnerable.

Yet while the extent of the failures seems to be particularly prevalent this pre-season, it is nothing more than a common occurrence in the Italian game. An article from TrueNumbers.it states that since 1986 to the present day, 175 professional clubs have failed to re-register for the following season. This equates to 5.4 teams every year over the past 32 years going out of business, with only two years, 1992 and 1999, seeing no clubs fold.

However, why it has hit home so hard this season is in no doubt due to the reputation of the clubs it is affecting. Bari and Cesena have both played in Serie A within the last eight years and have fan bases that match and, in many cases, exceed many other Serie A clubs. Indeed, for the 2017/18 Serie B season, Cesena averaged 12,106 fans at their Dino Manuzzi stadium, a total that was bettered by only one club. That club being Bari, who averaged 15,201, which was higher than six Serie A clubs. Even down in Serie C, Reggiana averaged 5,922, which across the three groups was only topped by four clubs. And one of those clubs, Vicenza, was forced to merge with Bassano to survive.

While these three have garnered the most coverage due to their 287 years of combined history, other smaller clubs have also gone defunct, including Mestre and Fidelis Andria. Questions hang over many more and as seen with Modena last season, starting off a league season does not guarantee that one will finish it.

Once seen as a problem faced mainly by clubs from the third tier and lower, the epidemic of financial hardship has begun to spread its wings into the higher climbs of Serie B and, more recently, begin to touch the perimeters of Serie A in Parma’s case. There is, however, no quick fix to the problem as evidenced by how long it has plagued the game, but the question that must be put forward is if there is even the willingness by those in power to find any sort of solution to the problem, or is the current situation of failure and repeat just now accepted.

Can a solution be found in turning Serie C from a fully professional league into one that accommodates both professional and semi-pro outfits? Would this help in easing the financial burden on clubs so obviously feeling the pinch on their balance sheets?

Turning back to Bari, Cesena and Reggiana, what is the future facing them? Well the tried and tested format is that each club will be re-founded with a slightly different name to the one they previously possessed and start again in Serie D, or if worse comes to worst the Eccellenza divisions.

Where they will start the long road back to where they hence came. A road that has been travelled by so many and bares the carcasses of many more who have failed once more upon the journey.

As Ronaldo went through the motions of the medical, walking easily upon the treadmill in a mesh vest, with a team of doctors monitoring his every move, a sense of hope returned to calcio. Maybe the good times were on the way back, maybe the calcio of the 90’s was beginning to rear its head once more.

But at the same time, as the photographers flashed their cameras and journalists pounced to break his every move, the doors to three great clubs were being shut. As the dreadful tears of the elderly Reggiana fan showed, players come and go but clubs are meant to last forever, and the pain felt when they don’t eclipse the joy brought about by a player like Ronaldo.

Andrea Pirlo ahead of Barcelona clash: “It’s not a decisive game, but we want to see what our worth is.”