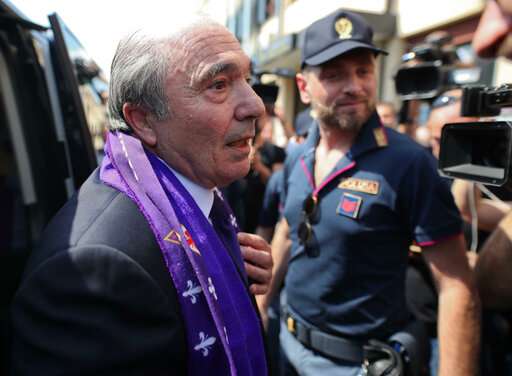 Faithful Fiorentina fans had to wait until the very last day of the season to see their club stave off relegation to Serie B. Today, they can rejoice and be hopeful with a new chapter in the club’s history underway.

Rocco Commisso is officially the new owner of ACF Fiorentina after purchasing the club from the Della Valle family.

Reestablishing the club from scratch in 2002 after it went bankrupt, the Della Valle’s 17-year reign has come to a close. While the last few months and years were quite turbulent, it is important to not lose sight of what the Della Valle family did for the club and the city. Their contribution brought back a major football club to the city of Florence.

An ongoing public feud between fans and the owners, which started in the summer of 2017 with the exodus of star players Federico Bernardeschi, Borja Valero, Matias Vecino, Josip Iličić and Nikola Kalinic, had recently risen to a boil. While the tragic death of captain Davide Astori in March 2018 put the disputes on the backburner, tensions began to rise to the surface yet again this spring. With the club in freefall during the second half of the season, going 16 games without a win, the ultras openly protested at the stadium and created multiple chants against Della Valle.

The fans passionately believed that the brothers did not have the proper ambitions for a storied club in a major city. Since a fourth place finish in the 2014-15 Serie A season, Fiorentina have consistently fallen in their final league position, succumbing to 16th this season.

While the Della Valle family put in many resources to bring the club back to top flight football, they knew the writing was on the wall. In June 2017 they released an official statement reading, “The ownership of ACF Fiorentina announces that it is absolutely willing, given the dissatisfaction on the part of the fans, to stand aside and put the club up for sale to those who want to buy it. The society is willing to receive concrete offers, obviously only from those who really want the Viola jersey and have the seriousness and solidity necessary to guide a challenging club like Fiorentina.”

It may have taken two years but they found the right man to take over. In steps Rocco Commisso, the Italian-American businessman, founder of Mediacom and owner of the New York Cosmos.

“There’s going to be a tremendous amount of effort, work, passion and money all going to be put in to make sure we have a better season than we had last year,” Commisso said in an interview to The New York Times. “We are looking at everything,” the 69-year-old continued. “I’m a man, for those that know me, who never over promises, I want to start slowly, learn a lot about the team, and eventually to set them on a good path to succeed. How long it takes I don’t know.”

Fiorentina supporters have welcomed Rocco with open arms. How long the honeymoon phase lasts, is another story.

The project at Fiorentina undoubtedly has potential for a bright future. The major questions will be how does Commisso approach fulfill that potential and how much time are the fans willing to wait for progress before becoming restless again.

In his brief career as a soccer owner, Commisso has proven to be bold and ambitious. Trying to save the North American Soccer League (NASL), he offered U.S. Soccer €500 million to invest in the league. Commisso has also filed an antitrust lawsuit against the US Soccer Federation and Major League Soccer (MLS).

The Calabrian native will certainly have a whole different set of issues on his hands in Florence. How to handle the situation with young hometown star Federico Chiesa, who has reportedly agreed to personal terms with Juventus, might be the most pressing. There are also long-term needs to address, such as building a successful squad, running the club efficiently while being ambitious, and plans for the club’s future, including the stadium situation.

Commisso’s arrival brings a long awaited light of hope for La Viola. Hopefully, it can shine for years to come.

Man City and Juve in talks regarding Cancelo

Options for Fiorentina’s bench and management