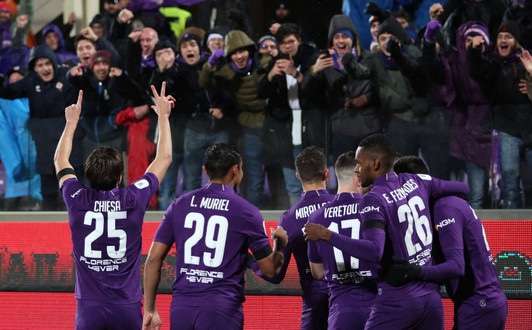 The early Coppa Italia fixture Wednesday night saw Fiorentina host Roma in front of 21,000 on a rainy evening. On paper it seemed to be a fairly even matchup but it turned out to be anything but.

Fiorentina and Roma have each had underwhelming league campaign’s as we dive into the second half of the season. While the sides are now climbing the table, both suffered lackluster starts to the Serie A season.

While Roma have climbed their way up to 5th place, with a chance to leapfrog into the coveted fourth spot on Sunday, they had an absolutely horrid night. Fiorentina ran riot en route to a emphatic 7-1 victory led by Federico Chiesa’s first career hat-trick.

A proper thumping in every way possible. Roma, and their fans who travelled and battled the rain, were flatout humiliated. There was a sense around the Artemio Franchi that this night could very well be a season-defining moment.

The night was certainly a memorable one for the Viola faithful but it could be a match that ignites this squad and propels them to European qualification. In the last two seasons, Fiorentina have sputtered at the end of the campaign to narrowly miss out on Europa League qualification, a massive disappointment following four consecutive seasons of European football.

The addition of Luis Muriel in January, has sparked new life into Stefano Pioli’s side. Not only has the Colombian scored four goals in his first three matches but he has transformed the Viola’s attack. He has brought a new dynamic to Pioli’s side, opening up space for both himself and Chiesa.

Official | Fiorentina sign Luis Muriel on loan with the option to buy from Sevilla.

“We prepared very well for this match and are truly happy,” Fiorentina boss Stefano Pioli said. “It’s an important step forward, although now our focus must return to Serie A for this weekend and Udinese.”

The man of the night echoed the same sentiment. “It was a great game, now we have to focus on this victory, but immediately get our minds on to the weekend and qualifying for Europe,” Chiesa told Rai Sport. “I couldn’t even imagine such an evening happening, but I thank everyone close to me and dedicate my hat-trick to them.”

There now seems to be a real sense of determination within this squad that they can accomplish something important this season. A restored sense of faith that has been lacking in Florence for a little while.

This Fiorentina side now have a confidence about them where you can see them battling each match and give anyone a run for their money. Pioli’s men will be looking to ride a wave of results with their hot form but will also need to sustain this level of play for the remainder of the season.

Fiorentina will now face Atalanta in a two-legged semi-final of the Coppa Italia with the matches to be played in February and April.