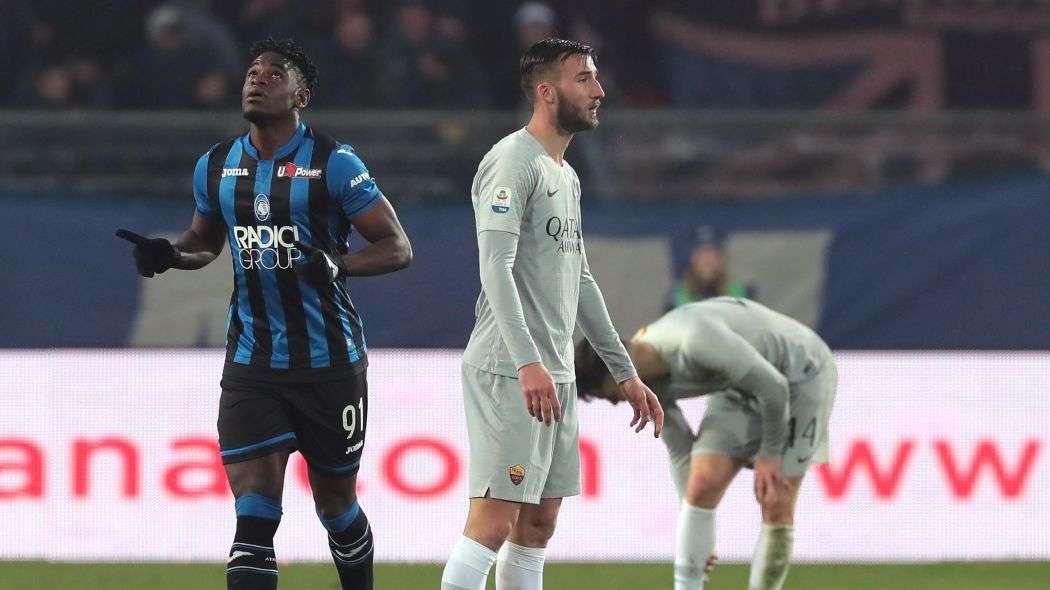 Atalanta come from three down to draw with Roma

Atalanta produced a stirring comeback on Sunday afternoon, overturning a three goal deficit to earn a 3-3 draw at home to Roma. Gian Piero Gasperini’s side had looked on course for a humbling defeat when they went 3-0 down inside 40 minutes, but responded admirably to turn the contest around.

Roma got off to the perfect start, as Edin Dzeko arrived in the box to steer home the opener in the third minute following a controlled chest into his path by Nicolo Zaniolo. Atalanta looked a threat going forwards, yet their leaky defence was to prove costly, with Roma netting twice in seven minutes to seemingly put the game to bed. Dzeko scored his second having been played through by Steven N’Zonzi, before Stephan El Shaarawy added a third on the break.

Having won four of their previous six matches, a run that included a draw with Juventus, Atalanta refused to give up, and pulled one back just before half time, Timothy Castagne heading home Alejandro Gomez’s teasing cross. That sparked the hosts into life, who ramped up the pressure in the second half, making it 3-2 thanks to a powerful header from Rafael Toloi.

At this stage, Roma were hanging on to their slender advantage, and it was no surprise when Atalanta gave themselves a golden opportunity to level the match. Following consultation with VAR, Josip Ilicic was adjudged to have been fouled in the area, leaving Duvan Zapata to step up and continue his stunning run of form. Instead, the Colombian forward skied his penalty over the bar.

Zapata was to get his redemption within a minute though, squirming a shot beneath Robin Olsen to make it 14 goals in his last eight league games.

Both sides remain firmly in the race for a top four spot following this gripping encounter. Roma sit in fifth, just a point outside the top four, whilst Atalanta are just two places and two points further back.

Juventus rode their luck to secure a 2-1 win against Lazio on Sunday night. Lazio appeared set to punish an uncharacteristically sloppy display from the champions when Emre Can diverted the ball into his own net to give the hosts the the lead. However, Joao Cancelo came off the bench to play a pivotal role in both of Juve’s goals, slotting home the equaliser from close range, before winning a late penalty when he was hauled down by Senad Lulic. Cristiano Ronaldo tucked away the spot-kick to hand Juventus all three points.

AC Milan and Napoli played out a 0-0 draw in a result that did little for either side’s respective ambitions. There were chances aplenty for both sides, but Gianluigi Donnarumma and David Ospina delivered impressive displays to preserve their clean sheets. Fabian Ruiz was sent off in injury time for Napoli, who will face the same opponents again on Tuesday night in the Coppa Italia quarter-finals.

Inter Milan endured a torrid weekend, losing out 1-0 to Torino, whilst also having to deal with the mounting speculation surrounding Ivan Perisic. The Croat, who has reportedly handed in a transfer request to push through a move to Arsenal, was an unused substitute, as Inter slumped to their fifth league defeat of the season, Armando Izzo scoring the winner. Matteo Politano was sent off late on for Inter, who have only one point from their two games since the winter break.

Frosinone brought Filippo Inzaghi’s time as Bologna manager to an end, thrashing their relegation rivals 4-0. The turning point of the game arrived in the 13th minute when Federico Mattiello was shown a straight red card following an ugly challenge. Frosinone took full advantage, producing a fine counter-attacking display to score twice in each half. Paolo Ghiglione, Andrea Pinamonti and a Camillo Ciano double sealed Frosinone’s second win of the campaign. Meanwhile, it was another miserable afternoon for Bologna, who have brought in Sinisa Mihajlovic to try and turn their season around.

Fiorentina edged one of the games of the season on Sunday lunchtime, seeing off Chievo 4-3 in Verona. The visitors led 2-0 through Luis Muriel and Marco Benassi, but Mariusz Stepinski made it 2-1, and Sergio Pellissier levelled from the spot on the hour mark, moments after Benassi had been given his marching orders. Despite being a man down, Fiorentina re-established a two goal lead, Federico Chiesa netting a brace either side of Pellissier having a penalty saved by Alban Lafont. Filip Djordjevic made it a nervy ending by heading home in the 89th minute, but Fiorentina were able to hang on for a thrilling victory.

SPAL stunned Parma with a late turnaround, winning 3-2 to improve their chances of survival. Roberto Inglese struck either side of the break to put Parma in control, yet SPAL scored three times in the final twenty minutes through Mattia Valoti, Andrea Petagna and Mohamed Fares to secure a dramatic win. SPAL are now seven points clear of the relegation zone.

Sampdoria jumped to sixth in the table, easing past Udinese 4-0. Fabio Quagliarella converted two penalties, meaning he has now found the target in each of his last 11 league starts, matching the record set by Gabriel Batistuta back in 1994. Manolo Gabbiadini scored his first goal since re-joining the club earlier this month, whilst Karol Linetty also got on the scoresheet.

Genoa picked up a 3-1 win at Empoli in their first game without Krzysztof Piatek. The Polish striker moved to AC Milan last week, but was not missed on this occasion. Debutant Antonio Sanabria added to goals from Christian Kouame and Darko Lazovic to move Genoa up to 13th place.

Sassuolo cruised past Cagliari 3-0 on Saturday afternoon. The side responded well to losing Kevin-Prince Boateng to Barcelona this week, as Manuel Locatelli, Khouma Babacar and Alessandro Matri found the net. The decision to award Sassuolo a penalty, which Babacar converted, was one of the poorest in recent memory. The influence of VAR continues to divide opinion.

Domagoj Vida an option for Roma and Inter