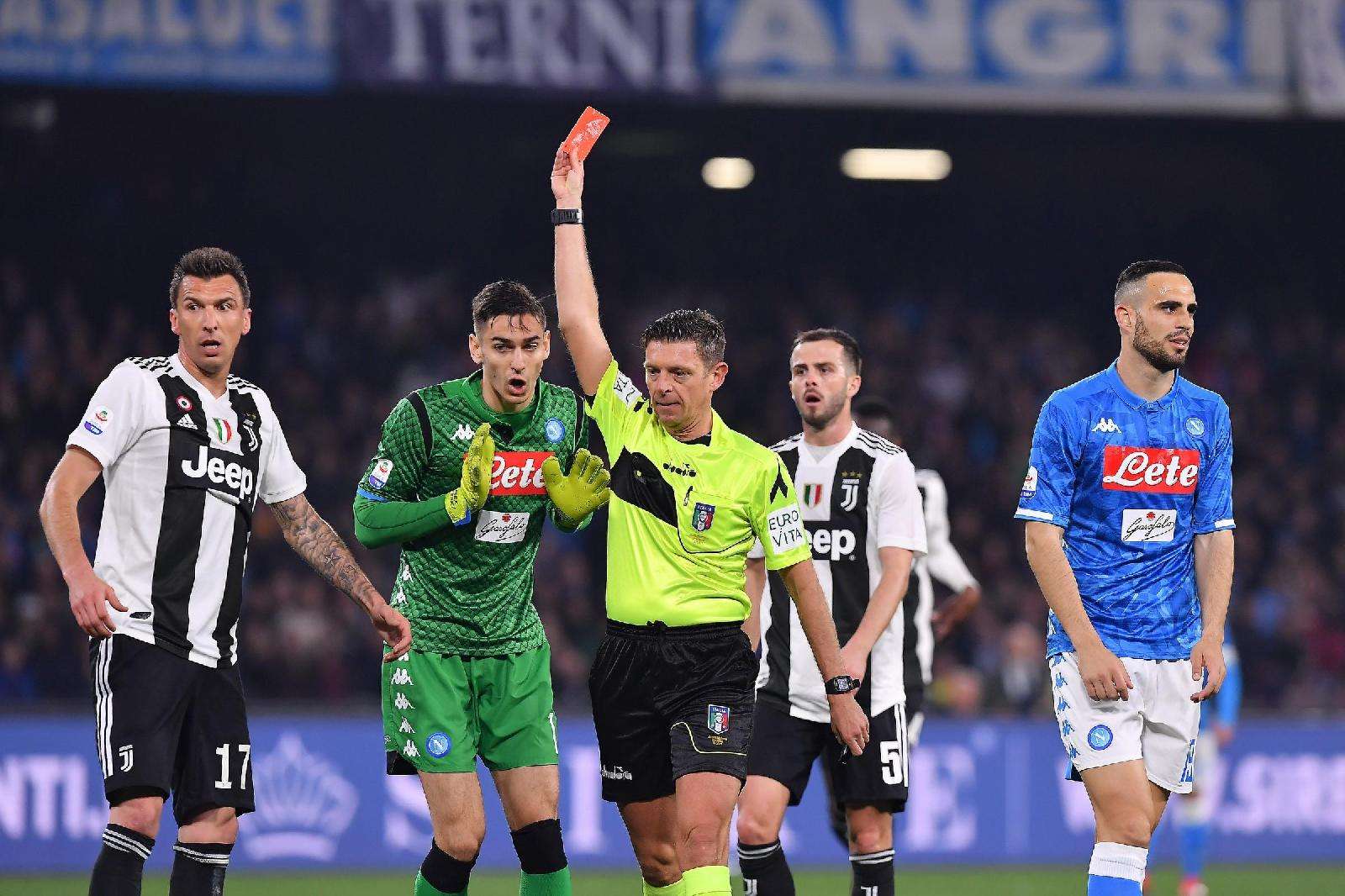 Juventus survived a second half comeback from Napoli to extend their lead at the top of the Serie A table on Sunday night, edging past their closest rivals 2-1 in Naples. In a game that included two red cards, one for either side, and a dubious penalty decision, it was the champions that came out on top to remain unbeaten in the league.

It was widely accepted before this game that the Serie A title was once again staying in Turin in May, but Napoli were playing for pride here, seeking revenge for the 3-1 loss that they suffered to the same opponents earlier in the campaign. They almost got off to the perfect start, with Piotr Zielinski curling an effort just wide from the corner of the box.

Yet the game turned in an instant after just 25 minutes. Kevin Malcuit’s woefully under-hit back-pass was cut out by Cristiano Ronaldo who was brought down just outside the area by goalkeeper Alex Meret. Having decided that it was a foul, the referee had no option but to give Meret his marching orders for denying a clear goal-scoring opportunity. On came David Ospina, whose first touch was to pick the ball out of the net from Miralem Pjanic’s well-placed free-kick. Napoli were now a man down and a goal behind, the game running away from them quickly.

They were still creating the occasional opportunity though. Zielinski ran through on goal, only to see his effort rebound off the post to safety. Despite their obvious advantages in the game, Juventus did not look fully comfortable. They needed a second goal, and they got it just before half time. Federico Bernardeschi’s cross found Emre Can unmarked in the box, who powered his header home to double Juventus’ advantage.

At 2-0 down, it appeared that the second half would be a case of damage limitation for the hosts. Within two minutes of the break, that had changed. Miralem Pjanic was adjudged to have stopped a through ball with his arm, and received a second booking to even up the numbers. Napoli had renewed hope, and this only grew when they pulled a goal back with just under half an hour to play. Lorenzo Insigne’s inch perfect cross found Jose Callejon, who could not miss from inside the six yard box.

Sensing that Juventus may be vulnerable, Napoli went in search of the equaliser. They were handed the perfect chance to level matters in the 84th minute. Following consultation with VAR, the referee concluded that Alex Sandro had his arm in an unnatural position when the ball hit it in the box, and awarded Napoli a penalty. Up stepped Insigne, but his spot-kick cannoned off the post and away. For the second time Napoli had been denied by the woodwork, the fine margins of football ultimately costing them at least a point.

Juventus are 16 points clear atop Serie A, whilst Napoli are secure in second, yet can only realistically win silverware via the Europa League this season. They return to action in that competition on Thursday against Red Bull Salzburg.

Lazio earned the bragging rights in Rome on Saturday night, cruising to a 3-0 win over their city rivals to get back in the race for the top four. Despite Ciro Immobile only being fit enough to make the bench, Lazio were good value for their victory. Felipe Caicedo’s well-taken goal gave them the lead, before they put the game to bed in the second half. Immobile came on to score from the penalty spot after Joaquin Correa had been upended by Federico Fazio, with Danilo Cataldi rounding off the scoring in the 89th minute. Aleksandar Kolarov was sent off in added time to complete a miserable evening for Roma, who are now just three points ahead of Lazio having played a game more.

Cagliari pulled off a shock on Friday, beating Inter Milan 2-1 to heap the pressure on Luciano Spalletti’s team as they look to hold onto a place in the top four. Lautaro Martinez had cancelled out Ivan Perisic’s own goal, but Leonardo Pavoletti produced a stunning volley to hand Cagliari the advantage once more. Nicolo Barella’s missed penalty late on did not prove costly, meaning that Inter dropped to fourth by the end of the weekend.

Replacing them in third are AC Milan, who picked up a hard-fought 1-0 win over Sassuolo. The only goal of the game was an own goal, scored by Pol Lirola. Andrea Consigli was sent off after 64 minutes to make Sassuolo’s task even tougher, yet they remained in the game until the end, forcing Milan to keep their fifth clean sheet in the league in 2019 to secure all three points.

Atalanta bounced back from consecutive league defeats, recovering from an early deficit to beat Fiorentina 3-1. The same two sides served up a classic in the Coppa Italia in midweek, playing out a 3-3 draw, and the same looked on the cards here when Luis Muriel put Fiorentina ahead inside two minutes. However, it was Atalanta who took control from this point onwards, equalising through Josip Ilicic, before a stunning solo effort from Alejandro Gomez and a Robin Gosens header handed Atalanta the victory.

Torino kept up their march for a European place, producing a later flurry of goals to see off Chievo 3-0. Andrea Belotti broke the deadlock in the 76th minute, whilst Tomas Rincon and Simone Zaza netted injury time strikes to leave Torino just six points outside the top four.

Udinese won the clash at the bottom end of the table, overcoming Bologna 2-1 to move seven points clear of the drop zone. Rodrigo De Paul opened the scoring from the penalty spot, with Rodrigo Palacio levelling matters for Bologna shortly before half time. Ignacio Pussetto scored the winner in the 79th minute, meaning Bologna stay in 18th place, four points adrift of safety.

Empoli came from behind three times on Saturday afternoon to claim a 3-3 draw at home to Parma. Neither side have been in the best of form recently, and that showed here with both defences struggling throughout. Parma held a 2-1 lead at the break thanks to goals from Gervinho and Luca Rigoni, either side of a Cristian Dell’Orco tap-in. Francesco Caputo equalised from the penalty spot just before the hour, with Bruno Alves then taking centre stage, putting his side ahead, only to deflect the ball past his own keeper in the first minute of stoppage time to gift Empoli a point.

Fabio Quagliarella went to the top of the goal-scoring charts on Sunday, scoring twice in a 2-1 win for Sampdoria against SPAL. His first was a perfectly executed volley, the second a close-range header, moving him to 19 league goals for the season. Jasmin Kurtic’s late free-kick gave SPAL some hope, but this was quickly extinguished when Thiago Cionek was sent off in added time.

Frosinone held out for an hour with ten men to earn a 0-0 draw away at Genoa. Francesco Cassata was given his marching orders in the first half for the visitors, yet they managed to keep Genoa at bay, and remain five points from safety with twelve games to go.

This weekend marked the one year anniversary since the sudden death of defender Davide Astori. As a mark of respect, each Serie A game was halted after 13 minutes, the number on the back of his shirt, allowing the crowd and players to applaud the Italian defender. A fitting tribute for Astori, capped 14 times by his country. Gone but far from forgotten in his homeland.

FEATURE | One to Watch – Nicolò Barella