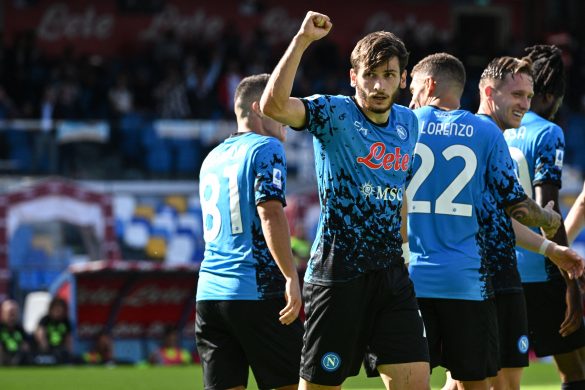 The goal from Antonio Sanabria went in vain as the whirlwind, produced by the Napoli attackers (Andre-Frank Zambo Anguissa and Khvicha Kvaratskhelia in particular) within the first 40 minutes of the match, embraced the home side with an emphatic 3-1 victory over Torino.

Despite missing a player like Victor Osimhen in the attack, Napoli drew the first blood early in the match, thanks to Zambo Anguissa’s strike in the sixth minute of the game. Torino had not revived from the early goal when Anguissa notched up his brace in the 12th minute of the match. Khvicha Kvaratskhelia soon joined the party as he scored the third from Piotr Zielinski’s delivery in the 37th minute of the game.

Antonio Sanabria got one back for the visitors, but Torino, having lost their manager to a red card following Ivan Jurić’s angry reaction toward the match referee, could not master a comeback in the second half. Owing to the win, Napoli stayed atop the Serie A points table. Here are the player ratings from the Partenopei’s 3-1 victory against Torino.