The Rise and Fall…and Rise Again of Adel Taarabt 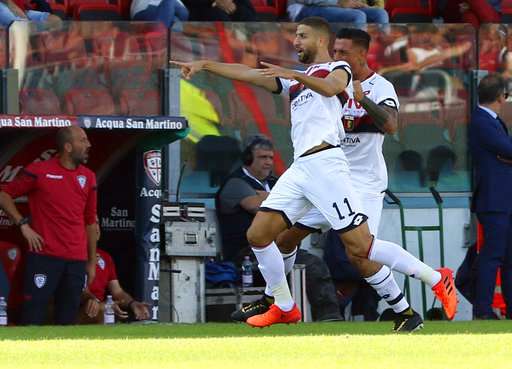 There was once a time where the name Adel Taarabt would have conjured up more visions of silky stepovers than Wembley ballads. A boy so gifted he was said to be next Zinedine Zidane by Harry Redknapp, amongst others, and drew comparisons to Paulo Di Canio not just for his technical ability, but his misdemeanors off the pitch as well.

As a young man, it seemed like Adel had the world at his feet, winning the ‘Football League Player of the Year’ as he just turned 22 after a thunderous campaign with QPR, where he scored 19 league goals in 44 games – truly incredible stats from an attacking midfielder. Neil Warnock, the former QPR manager, described Adel during this period as “the most talented player that I have had under my wing in my entire 30-year management career” (BBC Sport).

With his incredible feet and eye for goal he went on to have a cult-like following in the suburbs of West London. His reputation grew exponentially and at one point, after winning the Player of the Year, he entered talks with Paris Saint-Germain about a possible transfer just after their takeover by Qatar Sports Investments.

For unknown reasons, the transfer broke down and Taarabt stayed in West London for QPR’s returning season in the Premier League. However, this was the beginning of the fall for Adel and his form couldn’t have been different from the previous season. It can be argued that the recruitment of the equally opinionated Joey Barton had a role to play in his demise.

For the next few seasons, those match-winning performances became increasingly rare for the mercurial Moroccan. Often managers criticised Adel for his lack of effort or banging on the weight. In 2014 his then QPR manager Harry Redknapp described him as ‘not fit to play football’ and that he himself could have run more than Adel during a reserve game. He also went on to call Adel three stone overweight – how endearing.

The only way out was to head overseas on an 18-month loan spell at Genoa. But even this, to begin with, was a task too much for the man. Adel played just six times last season and failed to impress anyone in his first few months at the club. In 2017, prior to this season, Adel had become a representative to fans of what happens to a modern player when he gets too big for his boots.

It seemed as if this was it for Adel, his career down the pan and not just club level, but international level as well. For a player so blessed with talent he has only racked up a mere 18 caps for his country due to ‘run-ins’ with managers down the years and even walked out on his national team after finding himself dropped from the starting 11 on the eve of an African Cup of Nations qualifier.

But something happened to him over the summer. One can speculate, was he watching old highlights of himself and thought, “Yes, maybe I can give it one more go”, or maybe he realized that his lifestyle would not be sustainable without the salary of a top-level footballer – only he knows his thought process.

But, what happened was a minor miracle in this tale. Adel, again finished the season overweight and looked sluggish. He came to Ivan Juric, the Genoa boss, and pleaded for one final chance to prove himself. “It makes me happy to see him play. I like those who love football. He’s lost 10 kilos, he asked for another chance and I thought about it for a week before saying yes. I’m confident he’s learned from his mistake,” said Juric when quizzed about Adel after a friendly during the summer (Football-Italia).
Adel is now 28 years old and has found himself playing some of the most consistent football of his career, starting 7 out of 8 league games this season and only missing one due to suspension. There is a new hunger, a fresh drive now instilled in the player who a lot of people had dismissed as a has-been. Adel dons the look of a transformed player, no longer is he a boy who hugs the touchline and rarely tracks back. He is now a man who actively seeks the ball from the opposition, hounding the defenders for it and can be found almost as much in his own half pressing as he is in the opposition half attacking.

In their last league game, Genoa secured their first 3 points of the season against Cagliari, with a huge amount of inspiration coming from the Rossoblu’s number 11. Genoa have been struggling this season so far and have found it difficult to find their feet, but Adel led from the front and grabbed the game by the scruff of its neck – rolling back the years with a fantastic assist for the first goal and scoring an even better second. The Moroccan Magician was the best player on the park by a country mile, and after scoring, ran over to the bench to celebrate with his manager. There was appreciation, and jubilation in the face of Adel, finally it looked like he was enjoying his football again.

It is crazy to think that Adel is still just 28, a player very much with time on his side. If any team needed such inspiration it is Genoa, who have the look of a team who may be fighting relegation this season. Taarabt can be the star of the show and can be the man to save Genoa from their descent into the lower division. In saving Genoa, he can also save himself and provide us with some of the entertainment and inspiration that we missed from the young man for a long period of his career.

There was a time where Taarabt dreamt of wearing the Barcelona jersey during his time at QPR. It can be argued that there were moments where that level was not far from his reach, but as time has elapsed it must have become clear to himself that he would never be able to play in that famous Catalan strip. Looking at him now, it is clear that he wants to push on and do well in his career. He’s matured and looks settled at the Marassi, and Genoa can provide him with the platform to rebuild his reputation.

“I rediscovered my love for football and for myself. I am crazy about this sport and watch every game I can. My idol is Zinedine Zidane and now I play closer to the goal, in the role he had,” Taarabt told La Gazzetta dello Sport. “I thought I could never get back to my best, but with this new physical form, I can start winning again and playing well with Genoa. It’d be wonderful to get my own chant from the Genoa fans.”

Maybe Taarabt is no longer looking for the spotlight, but I believe when you possess the type of talent he does, you can’t shy away and pass the buck onto others. Perhaps he wishes he was born a right back, but alas, Adel is an attacking midfielder, an artist on the pitch who when he is in the mood can provide the spark in any team. This weekend he faces an old team of his in Milan, where perhaps he will show the Rossoneri what they were missing out on.

Milan To Continue With Montella…For Now