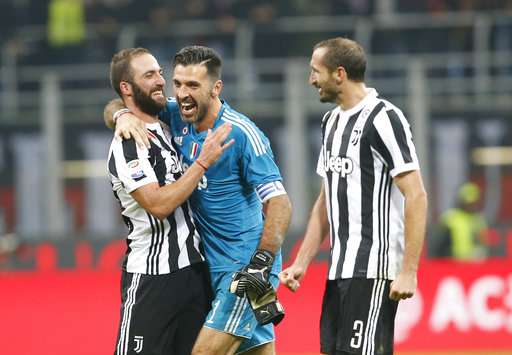 Week 11 gave us another weekend of top quality Italian football with goals, drama and intriguing conclusions to make. After Inter’s win at Verona, it’s time to ask the question: How many clubs are in the title race this season?

The big match over the weekend was the clash between Milan and Juventus at San Siro. Juventus came into the game somewhat questioned after recent results, despite scoring ten goals in their last two league games to react following their loss against Lazio. They showed why they are six-time reigning champions as their strength, experience and indeed quality proved too much for Milan. Miralem Pjanic performed a midfield masterclass in the way he kept possession and always looked to find passes through the lines of Milan’s defensive structure as highlighted by the splendid pass to Paulo Dybala which led to Juve’s opening goal. Although Pjanic’ pass was great and opened the possibility, the action of Gonzalo Higuain was top drawer as he received the ball from Dybala, took a touch to set himself up before firing a hard drive mid-step which left Gianluigi Donnarumma with no chance to save the strike. Milan tried to recover but struggled to create chances against Juve’s defensive block, but they did find one great chance when Nikola Kalinic was played through and hit the crossbar before Daniele Rugani (excellent throughout) blocked the follow-up attempt from Hakan Calhanoglu.

Pjanic was also highly influential without the ball as he made four interceptions as well as three blocks in a complete performance. The Bosnian was also involved in Higuain’s second goal. Pjanic, Dybala and Juan Cuadrado combined quickly on the right before Dybala switched the ball to Kwadwo Asamoah on the left. Asamoah dribbled inwards before passing the ball towards Dybala. Dybala stepped over the ball which rolled into Higuain, who quickly feinted Ricardo Rodriguez before finishing against the inside of the post which once again left Donnarumma helpless. Two stunning individual goals from the Argentine which helped Juve win the game. Milan’s bad form continued, but the performance was still alright, it’s no shame losing to such a strong Juventus, especially when the two goals were absolute world class from one of the best prima punti around. Vincenzo Montella lives to fight another day, and for his sake, we can hope Milan start getting positive results quickly.

Juve’s win meant they put some pressure on Napoli, who responded by safely beating Sassuolo 3-1 at San Paolo where an opener from Allan was cancelled out by Diego Falcinelli’s sublime header but goals from José Callejon and Dries Mertens ensured Napoli’s win. They are up to 31 points, two ahead of Inter and three ahead of Juventus and Lazio. Roma have a game in hand at Sampdoria, but if they win that one they are just a point short of Juve and Lazio on 27 points. That means five teams are possibly within four points of each other with nearly one-third of the season played. Napoli and Juventus are certain to remain at the top, but if Inter, Lazio and Roma can keep their consistency going we might have the most exciting title race anywhere.

Lazio maintained their form by beating the hopeless Benevento 5-1 where the second goal from Lazio, scored by Ciro Immobile after a splendid outside of the boot pass from Sergej Milinkovic-Savic, was the pick of the bunch. Bastos, Adam Marusic, Marco Parolo and Nani were also on target for Lazio while Achraf Lazaar got Benevento’s solitary strike. Immobile now leads Serie A rankings both for goals (14) and assists (6). Incredible.

Their city rivals Roma beat Bologna at the Stadio Olimpico courtesy of a fantastic Stephan El Shaarawy volley. The Italian international met Lorenzo Pellegrini’s outswinging corner at the back end of the penalty area with his left foot to send a stunning volley into the top corner. Bologna competed well, but Roma proved too strong and continue to impress under Di Francesco.

Torino finally won, which probably saved Sinisa Mihajlovic’ job, at home to Cagliari where goals from Iago Falqué and Joel Obi helped turn around a game in which the Sardinians took the lead courtesy of a brilliant counter-attacking goal finished by a superb Nicolo Barella strike. Torino’s first goal was another reminder of the brilliance of Adem Ljajic as he ran inside from the right with the ball glued to his foot until scooping a pass over the Cagliari defense to the forward-storming left-back Christian Ansaldi whose low cross was turned in by Falqué. With Ljajic in a free role, anything can happen for Torino going forward, and Mihajlovic did wisely when reinforcing his midfield with an extra man after having seen his Toro being way too open lately.

SPAL took a vital win at the bottom as they defeated fellow strugglers Genoa thanks to Mirko Antenucci’s strike. The win gave the newcomers three vital points as they lifted themselves away from trouble at least for now.

In the battle of the diamonds, Sampdoria crushed Chievo 4-1 at Luigi Ferraris. Karol Linetty opened the scoring but Chievo came back with Fabrizio Cacciatore’s equalizer. Lucas Torreira would then score probably the goal of the week with a thumping free-kick from distance and goals from Duvan Zapata and Torreira again gave Samp another hugely impressive result under Marco Giampaolo. They’re currently in sixth place and with that game against Roma in hand, maybe Europe is a real possibility for Giampaolo’s men.

Udinese surprisingly beat Atalanta in Udine after performing a great comeback after going down to Jasmin Kurtic’ well-worked opener. A Rodrigo De Paul penalty and a sublime Antonin Barak strike turned the game however and when Bryan Cristante missed his 85th-minute penalty to equalize the result was settled. Big, big win for Luigi Del Neri’s men at the bottom.

In another surprising result, Crotone upset Fiorentina with a strong 2-1 win as the Pitagorici, showing how strong they are at home. Ante Budimir and Marcello Trotta capitalized on poor play from Fiorentina who did get a goal back through the in-form Marco Benassi but the midfielder’s strike proved in vain. Fiorentina, despite this setback, look really good under Stefano Pioli and challenge Sampdoria for that sixth place as things stand. It would be a great achievement to keep Milan and Torino behind them.

Inter scraped a win at the Bentegodi against Hellas Verona after an Ivan Perisic winner. Borja Valero had opened the scoring after applying the finishing touch to a brilliant Antonio Candreva cross. After a matter of seconds on the pitch, Giampaolo Pazzini scored from the penalty spot in the 59th minute to equalize but Perisic won the game eight minutes later. Hellas did surprisingly well but remain at the bottom and Inter keep the pace just two points behind Napoli. They seem to find different ways to win games, they can dominate possession and they can counter-attack and they win even when not playing well. They look ready to challenge.

Torreira or El Shaarawy. I’ll let you choose for yourself.