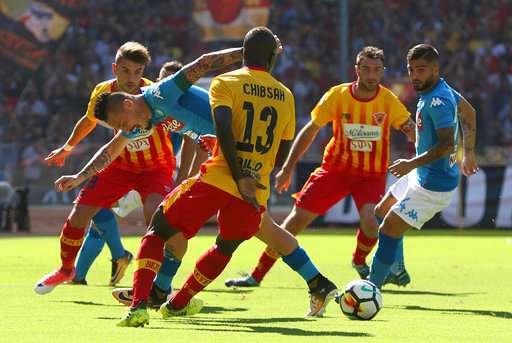 Bottom of the league Benevento host table toppers Napoli at the Stadio Ciro Vigorito as both teams need results for completely different reasons on Sunday evening.

Benevento remain rooted to the relegation zone as they welcome a Napoli side who are having one of their best seasons since they last won the league during the 1989/1990 season.

If they continue in their current run of form, there is absolutely no reason why Napoli shouldn’t be challenging for the Serie A title the last matchday of the season.

Juventus are right on their back, but you have to give credit to Mauricio Sarri’s side for remaining at the top of the league.

Gli Azzurri have gone seven games unbeaten following their loss to Juventus at the start of December in the Italian top flight and they will be anxiously waiting to see if they continue that form against a team who looks as though they will be relegated in their first season in Serie A.

Sarri’s side plays with intensity. They are a force to be reckoned with and following their win over Bologna last time out, they will no doubt be confident of picking up three points against the bottom-placed side.

It seems as though it will be only a matter of time before Benevento’s fate is sealed after securing only a mere seven points from 22 games this season – two wins and a draw.

They have lost both of their previous outings 3-0 in defeats to Torino and Bologna on the road and the last side they want to face is the league leaders.

Especially taking into account some of the talents the Partenopei have on display. Their biggest threat this season is Dries Mertens, with the Belgian in sizzling form, having scored on 13 occasions and assisting six times this season.

Benevento will need to be on top form defensively to stop the Belgian superstar from adding to his tally on the weekend. The hosts have had trouble going forward this season as well, with their top scorer, Massimo Coda on a mere three goals.

Napoli are clear favorites heading into this weekend. However, it is vitally important they don’t get complacent and come away from Benevento with three points.

Di Zerbi actually played on 33 occasions for Napoli in a four year period between 2006 and 2010, scoring a total of three times. The 38-year-old has also had spells in management with Foggia and Palermo, before being appointed Benevento’s new manager in October 2017 but has failed to turn their fortunes around, with the club still bottom and a staggering 12 points from survival.

He has done some job and will be looking to continue his good work with Gli Azzurri and be looking to extend their unbeaten run to eight following the early December loss to Juventus as they bid for their first title since 1990.