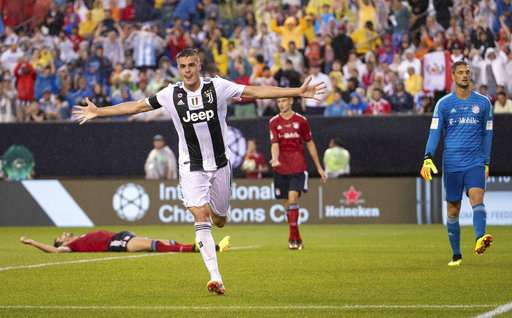 A rainy night in Philadelphia certainly fit the profile of this match. European heavyweights Juventus and Bayern Munich met for their opening matches in the International Champions Cup.

Neither club had any players in their squad who represented their nations in Russia at the World Cup.

The rain started coming down heavy roughly ten minutes prior to kickoff and slowly died down as the match progressed. Despite it being a rainy Wednesday night, a total of 32,105 fans made the trip to Lincoln Financial Field for the pre-season match.

Bayern started quite well, putting the Italian side under pressure in the opening quarter of an hour. Summer signing Mattia Perin was up to the task in net though, as the 25-year-old made a total of six saves.

A 21-year-old striker stole the show as Andrea Favilli bagged a first-half brace to propel Juve to a 2-0 victory.

The first goal was a fairly easy finish from 12 yards out as a wayward back pass from Josip Stanisic forced Bayern goalkeeper Sven Ulreich into a sliding clearance, which went directly to Claudio Marchisio who found an open Favilli in the box for an open-net goal.

Favilli got his second just eight minutes later as a pinpoint long-ball over the top from Alex Sandro put the young Italian through on goal, who finished with a calm left-footed finish to the near post.

Allegri made a total of nine substitutions, giving ample amount of playing time to the young guys in the squad. Only Alex Sandro and Mattia De Sciglio played a full 90 minutes for the Bianconeri. Miralem Pjanic and Daniele Rugani, who have both been hot names in the transfer market, each started the match.

Both sides show spurts of promising play but it was obvious this was an early preseason friendly. The rhythm of play was a bit choppy throughout with numerous fouls committed.

Even though it was just the first pre-season match of the season, it felt like a typically pragmatic victory from a Max Allegri side.

Although Juventus did not let any players speak to the media, Max Allegri made himself available.

When asked if he sees Cristiano Ronaldo playing as a central striker or on the left, the Juve boss was brief and vague in his response saying, “Ronaldo will play where he always does, in attack, and score goals like he always does.”

Regarding being nominated for FIFA Coach of the Year award: “I am satisfied with the nomination, it is really the players who bring these great results and I am very honored.”

Allegri confirmed that goal scorer Andrea Favilli will join another Serie A club this summer, very likely to be Genoa.

When asked if the upcoming Serie A season will have a competitive title race, Allegri shared his thoughts: “Last season was a good championship because towards the end Napoli was in first place, we needed 95 points to win [the Scudetto]. This year will be will be a championship where to repeat for the eighth time we will need to play well. I do not think it will only be us challenging for the title because before we win anything we always go onto the field at 0-0.”

Juventus will continue their International Champions Cup play on Saturday against Benfica at Red Bull Arena in New Jersey followed by a trip to Atlanta for the MLS All-Star Game on August 1.