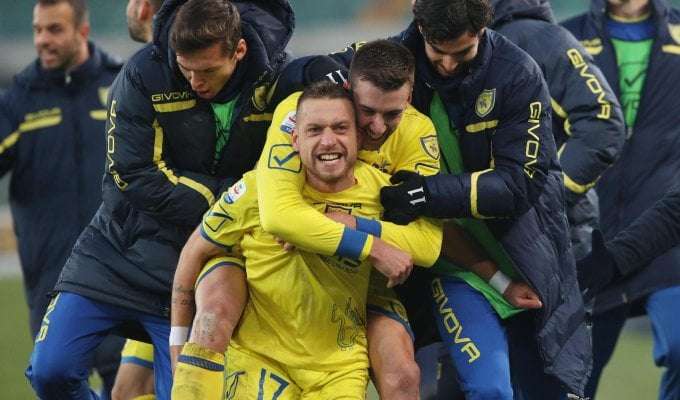 Chievo picked up their first win of the season at the nineteenth time of asking, beating fellow strugglers Frosinone 1-0 on Saturday afternoon in Verona. This was a must-win game for the hosts, who started the match ten points from safety.

Despite failing to secure a win in recent games, Chievo have shown promising signs under their new manager, Domenico Di Carlo. They almost got off to the perfect start in this game when Sergio Pellissier headed home a corner. However, after consulting with VAR, the referee opted to disallow the goal due to a teammate being in an offside position, obstructing the goalkeeper.

That call showed the small margins that can alter a game, but Frosinone were to have their unfortunate moment shortly after the break. Raman Chibsah looked to have handed his side the lead with a close-range header, only for Stefano Sorrentino to produce a stunning save, clawing the ball off the line.

Both teams were still searching for the opening goal, and with the pressure growing, Frosinone defender, Marco Capuano, gave Chievo renewed hope of claiming victory. Having missed the last two games due to illness, the centre back returned for this game, yet dived in recklessly just before the hour mark and was shown a red card.

Now holding a man advantage, Chievo pushed for the winner. It came from a set-piece, as Emanuele Giaccherini curled his free-kick from the edge of the area into the corner of the net past the helpless Marco Sportiello. This was Giaccherini’s second goal of the campaign, and undoubtedly the most important one of Chievo’s season so far.

Chievo and Frosinone remain 20th and 19th respectively. Frosinone are winless since late October and sit six points shy of safety. Meanwhile, Chievo are two points further back, but have only lost one of their seven league games under Di Carlo, giving themselves a small chance of pulling off a great escape in the second half of the season.

Napoli rebounded from their loss in midweek to Inter Milan, a game marred by violence and racist chants, as they saw off Bologna 3-2. Arkadiusz Milik scored twice, only to have his goals cancelled out by strikes from Federico Santander and Danilo. It was left to Dries Mertens to net the winner two minutes from time, keeping Napoli five points clear of Inter in second place.

Juventus ended the year with another win, this time over Sampdoria 2-1. Cristiano Ronaldo opened the scoring inside two minutes, yet Sampdoria hit back when Emre Can was adjudged to have handled inside the area, allowing Fabio Quagliarella to level from the spot. Juventus retook the lead after the break thanks to their own penalty, converted by Ronaldo. Sampdoria looked to have snatched an equaliser in added time, but Riccardo Saponara’s effort was controversially ruled out by VAR for an offside in the build-up. These three points mean that Juventus have made the best ever start to a Serie A season, and sees them nine points clear at the midway point of the campaign.

AC Milan came from behind to beat SPAL 2-1 at the San Siro. Andrea Petagna’s deflected shot had given SPAL a surprise lead, and having failed to score in their previous four league games, Milan fans were fearing the worst. Instead, their side responded well and turned the game around through Samu Castillejo and Gonzalo Higuain. Suso was sent off late on, but Milan held on for an important win.

Lazio remain in 4th spot, despite only drawing 1-1 at home to Torino. Andrea Belotti put Torino in front, with Sergej Milinkovic-Savic firing home the equaliser after the break. Adam Marusic and Soualiho Meite were shown red cards in the dying minutes, as both sides ended the game with ten men.

Inter Milan consolidated third place by beating Empoli 1-0. Keita Balde scored the only goal of the game eighteen minutes from time. Empoli find themselves in 17th at the halfway point of the season, three points above the relegation zone.

Rome made it three wins from four, securing a 2-0 win against Parma. Second half goals from Bryan Cristante and Cengiz Under were enough for Eusebio Di Francesco’s side. In a campaign plagued by inconsistent performances and an injury crisis, Roma will be relieved to enter the winter break just two points outside the top four.

Atalanta produced the performance of the weekend, crushing Sassuolo 6-2. Josip Ilicic scored his second hat-trick of the season, with Duvan Zapata, Alejandro Gomez and Gianluca Mancini also finding the net. After a troublesome start, Atalanta have hit their stride in recent weeks and will be eyeing a European place once again come the end of the season.

Udinese lifted themselves further clear of the drop zone courtesy of a 2-0 victory over Cagliari. Ignacio Pussetto and Valon Behrami scored either side of half-time, in a game that contained two red cards. Luca Ceppitelli was given his marching orders in the early stages of the second half, with Rolando Mandragora evening up the numbers with just over ten minutes remaining.

The only game of the day that failed to produce a goal came between Genoa and Fiorentina. After a second consecutive game where Fiorentina were unable to find the net, Stefano Pioli’s men end 2018 in 10th spot. Genoa have won just one game since October, yet are currently 14th, seven points above the bottom three.