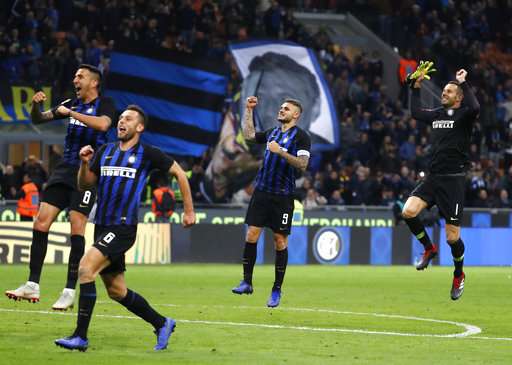 Mauro Icardi scored a 92nd-minute winner to decide the opening Milan derby of the season on Sunday night. The Argentine striker had a mixed record in this fixture last year, netting a hat-trick in the first meeting, before missing two sitters in a goalless draw back in April. He more than made amends here.

Both sides approached this game in good form having gone on winning streaks prior to the international break. However, neither side started the game sharply in what was a cagey opening thirty minutes. The main talking point during that period was an ankle injury sustained by Radja Nainggolan, who was unable to continue after a clash with Lucas Biglia. Yet there were signs of life in the final minutes of the half. Icardi thought he had given Inter the lead but was correctly denied by the offside flag; Mateo Musacchio suffered the same fate for Milan shortly before the interval. Inter were creating the better chances, as Stefan de Vrij saw his volley come back off the post, whilst Matias Vecino ballooned an effort over the bar when well-positioned.

Into the second half, and the pattern of play remained unchanged. Milan were having moments on the counter but were largely having to show defensive discipline to limit Inter to half-chances. Luciano Spalletti was growing increasingly exasperated as his side regularly lacked the necessary quality to break Milan’s stubborn resistance. Games like these are often decided by a moment of magic or a mistake. On this occasion, it was both.

Inter attacked down the right, with Alessio Romagnoli coming across to deal with Vecino, who delivered a fine performance in a big game once more. The Uruguayan curled a stunning cross past Romagnoli and into the box, perfectly dissecting Musacchio and Milan’s teenage goalkeeper, Gianluigi Donnarumma. The youngster was caught hopelessly out of position, allowing Icardi to drift in unmarked and head into the empty net.

That is now seven straight wins for Inter, who stay in the third spot. Milan remains mid-table and are still searching for the consistent run of results that they will need to challenge for a top-four spot come the end of the campaign.

Juventus saw their 100% start to the season end on Saturday as they drew 1-1 with Genoa. It had looked like being another routine win for the champions when Cristiano Ronaldo reacted quickest to turn home a cross inside twenty minutes. However, a crucial second goal to kill the game off never arrived, and Genoa seized their opportunity. The Juventus backline switched off, thinking that the ball had gone out of play after an initial Genoa attack, and were punished as Daniel Bessa ghosted in to head home the resulting cross from close range.

Their closest rivals at this stage are Napoli, who closed the gap at the top to four points as they eased past Udinese 3-0. An early Fabian Ruiz goal set Napoli on their way, and further strikes from Dries Mertens and Marko Rog inside the final ten minutes confirmed the three points. An important result for Carlo Ancelotti’s men ahead of their crunch midweek clash with Paris Saint-Germain.

Lazio were made to work for their win, eventually getting the better of Parma, 2-0. Parma have impressed on their return to the top-flight and defended admirably here for long periods. The visitors stayed patient though, earning their reward in the closing stages. Ciro Immobile broke the deadlock from the penalty spot following a clumsy tackle by Riccardo Gagliolo, and then turned provider as his through ball was turned home by Joaquin Correa.

Gian Piero Ventura knew he had a job on his hands with Chievo before this weekend. The size of the task was made even clearer on Sunday afternoon, as they succumbed to a humiliating 5-1 defeat at the hands of Atalanta. It has been a tough start to the season for Atalanta, but they went some way to answering their critics here. Josip Ilicic marked his first start of the season with a hat-trick, with Marten de Roon and Robin Gosens also getting on the scoresheet. Valter Birsa stroked home a late penalty, but this was a mere consolation for a Chievo side that looks destined for the drop already.

After a run of four successive wins in all competitions, Roma suffered a setback this weekend as they were beaten 2-0 at home by SPAL. The hosts were undone by goals from Andrea Petagna and Kevin Bonifazi either side of half time and failed to capitalise on SPAL being reduced to ten men when Vanja Milinkovic-Savic was given his marching orders in the 75th minute.

The battle at the bottom turned out to be a classic, with Frosinone and Empoli sharing six goals in a 3-3 thriller. The pendulum swung on numerous occasions throughout the game, as Miha Zajc and Matias Silvestre put Empoli ahead after Frosinone had taken an early lead before a Daniel Ciofani brace appeared to be sending Frosinone to their first victory of the season. Salih Ucan’s precise volley just over ten minutes from time ensured that the wait for that elusive win goes on.

Bologna battled back from two goals down to earn a 2-2 draw at home to Torino. Iago Falque and Daniele Baselli put Torino in a comfortable position, but Bologna responded through Federico Santander and Arturo Calabresi to maintain the two-point gap between themselves and the bottom three.

Fiorentina and Cagliari shared the spoils in a 1-1 draw in Florence in Sunday’s early evening kick-off. Jordan Veretout put Fiorentina in front from the spot after a late challenge from Nicolo Barella, only to see his side pegged back with twenty minutes to play. Leonardo Pavoletti capped a momentous day for his family, sliding home the equaliser just hours after becoming a father.

The weekend’s action concluded with another stalemate, as Sampdoria and Sassuolo played out a goalless draw. Sampdoria extended their unbeaten run to four matches, whilst Sassuolo have now gone three matches without a win after a blistering start to the season.