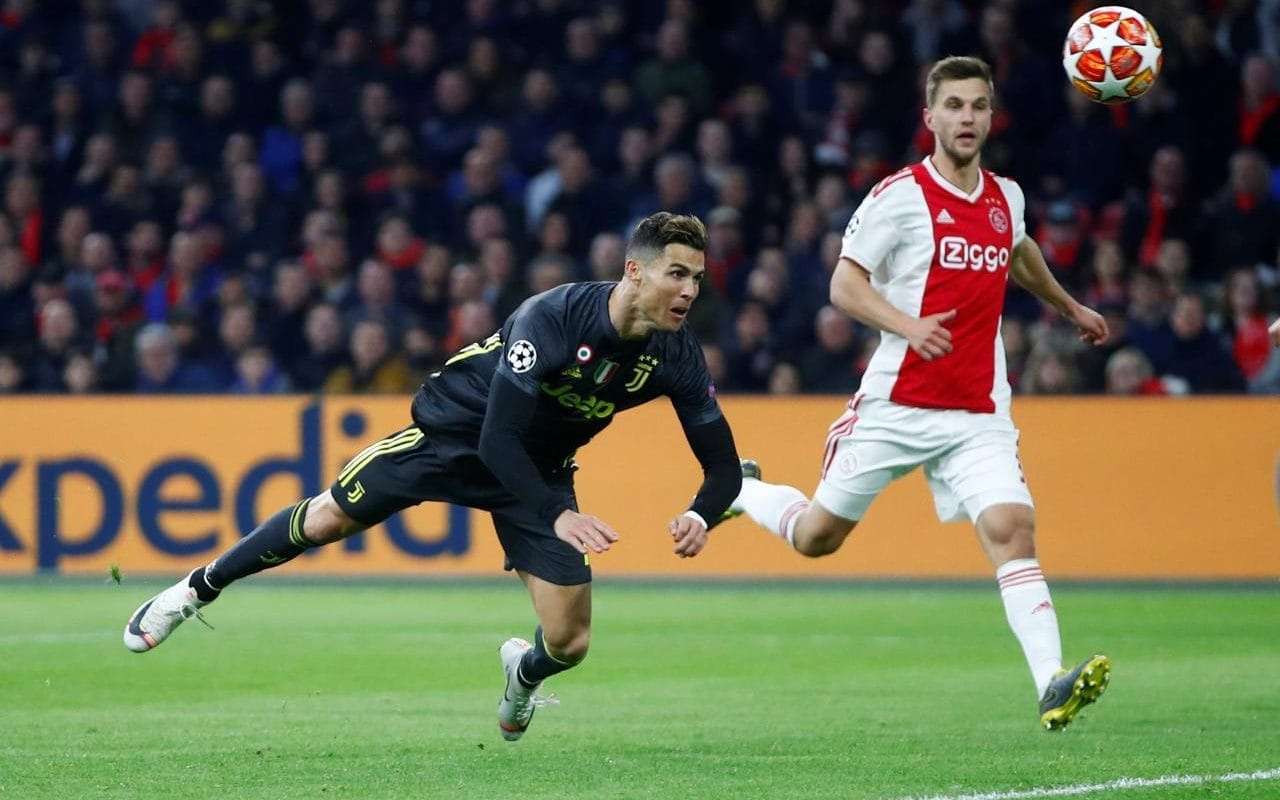 Honours even in Amsterdam: Ajax 1-1 Juventus

Juventus were held to a 1-1 draw in the first leg of their Champions League quarter final against Ajax, leaving the tie delicately poised heading into next week’s return match. Cristiano Ronaldo returned after two weeks out injured to score his 125th Champions League goal in the final minute of the first half, but David Neres levelled the game less than a minute after the break.

The visitors were dealt a double injury blow in the build-up to the game. Captain Giorgio Chiellini was ruled out with a calf problem, whilst Emre Can failed to make the squad with the ankle sprain that he picked up on the weekend. Without their leader and one of their best players in recent games, Juventus appeared vulnerable to struggling against their Dutch opponents, much like Real Madrid did in the previous round.

Indeed Ajax did start on the front foot. Hakim Ziyech was the first player to call Wojciech Szczesny into action, his curling effort forcing the Polish keeper to spring across and tip the ball over the bar. Midfielder Donny van de Beek went even closer later in the half, as his shot on the turn flew inches wide with Szczesny well beaten.

Yet Juventus were having moments of joy themselves up the other end. Having shot narrowly over early on, Federico Bernardeschi went even closer when the ball dropped just behind him in the box. The Italian winger swivelled and struck his shot well, only to see it just creep wide of the near post. It seemed that the half was set to end goalless, but the highest scorer in the competition’s history had other ideas. After laying the ball into the path of Joao Cancelo, Ronaldo sprinted into the area to meet the return pass, stooping to head past Andre Onana.

Despite conceding on the stroke of half time, Juventus’ goal did little to dampen spirits within the stadium. Welcomed back out onto the pitch with Bob Marley’s ‘Three Little Birds’ echoing around the ground, Ajax flew out of the traps after the interval. Cancelo, the creator of the away goal, was caught in possession by David Neres, who then drove at the Juventus defence, cut inside to make space, and curled a stunning finish into the far corner.

A swift response from the hosts, and they continued to pile on the pressure in the opening 20 minutes of the second half, hoping to take an advantage with them to Turin next Tuesday. Nicolas Tagliafico tried his luck from range, his fierce strike brushing the side netting, as Ajax pinned Juventus back. Much like the away leg against Atletico Madrid in the last 16, Juventus were finding it difficult to cope with the intensity of their opponent’s play.

With a change of tactics necessary, Douglas Costa entered the fray for the first time in two months to replace the ineffective Mario Mandzukic. The Brazilian displayed no signs of rustiness, trying out an ‘elastico’ and regularly running at his man down the left flank. Still Ajax came forwards though, the best chance of the half falling to 19-year-old Jurgen Ekkelenkamp, but Szczesny got down well to push his shot away.

Juventus almost stole a late winner with some individual brilliance from Costa. Shaking off his man, the pacy winger drove into the area and fired his shot against the far post. So close to the perfect return for a player who has only been on the fringes of the Juventus team this season.

The Italian champions will be content with a score draw away from home. Ajax will have to score in Turin against a side that will hope to have Chiellini and Can back in the ranks. Yet Ajax scored 4 in Madrid in the round of 16, so scoring goals will not be a major concern for them. This tie is far from settled.

A woeful first half display cost Napoli dearly on Thursday night as they succumbed to a 2-0 defeat in the first leg of their Europa League quarter-final against Arsenal. Goals from Aaron Ramsey and a Kalidou Koulibaly own goal means that the London club deservedly take a sizeable lead to Naples next Thursday.

Napoli were careless in possession throughout the first half, and were fortunate to only be two goals down at the break. Arsenal’s first was a wonderfully worked team move. Slick interplay between Mesut Ozil, Alexandre Lacazette and Ainsley Maitland-Niles created space for Ramsey to make a late run into the box and stroke the ball past Alex Meret.

After 25 minutes it was 2-0. Fabian Ruiz was caught in possession by former Sampdoria midfielder Lucas Torreira, who moved forwards before unleashing a shot that took a wicked deflection of Koulibaly and looped into the net. Napoli appeared shell-shocked, allowing Arsenal to attack at will, with Lacazette and Pierre-Emerick Aubameyang both passing up chances to extend the home side’s advantage.

When Napoli did give a brief glimpse of what they can do, they failed to convert their chances. Lorenzo Insigne blasted over when well-placed in the box, with the diminutive Italian then turning provider after the break, only to see Piotr Zielinski somehow put his close range sliding effort off target.

Napoli were better in the second half, but Arsenal still could have put the tie to bed. Meret had to be on his best form to keep out Ramsey and Maitland-Niles, with the former then missing a straightforward chance with just under 10 minutes left, scooping his shot over with the goal at his mercy.

Carlo Ancelotti’s side have now gone three games without a win in all competitions and will need a much improved performance next week if they are to progress to the final four. Having failed to net an away goal, Napoli have it all to do.