FEATURE | A look back at the career of Gianluca “the wall” Pagliuca. 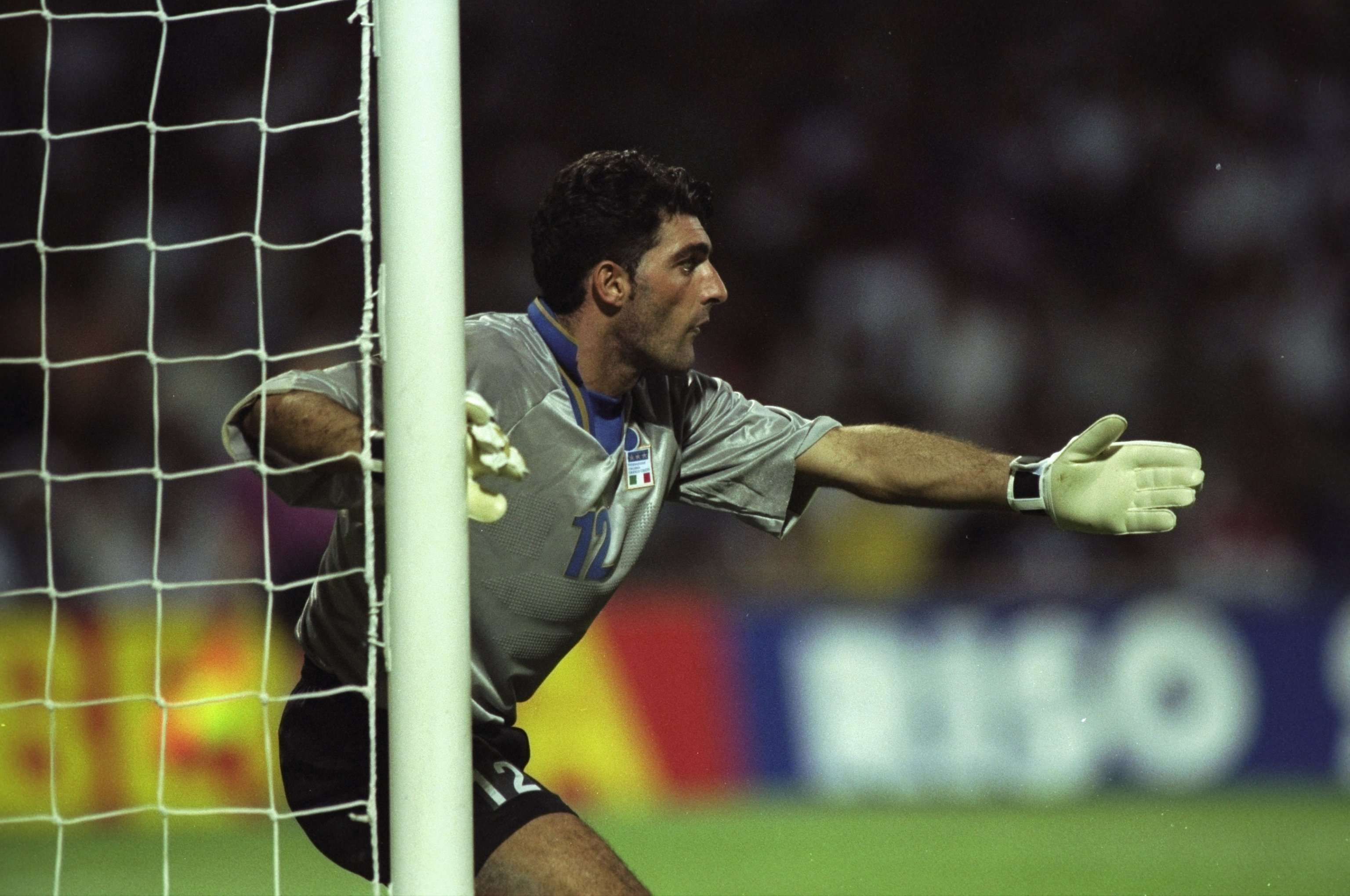 The portiere is held in high regard in Lo Stivale, a footballing nation that finds as much beauty in keeping the ball out of the net as it does putting it in.

A stark contrast to another footballing giant Brazil, their blatant distrust of the goalkeeper rooted in the theory that he is the joy killer, his sole purpose to rebuff and disrupt O Jogo Bonito.

There are few countries who can hold a light to the goalkeepers that Italy have produced over the years, dating back to the days of the legendary Dino Zoff. Alex Meret and Marco Carnesecchi are the next talents off the conveyor belt already looking to eclipse Gianluigi Donnarumma who at 20 years old has already over 150 games under his belt for AC Milan.

Inter’s Walter Zenga was Italy’s starting goalkeeper for the home World Cup in 1990 as the Azzurri came within a game of making the final. It was in the semi-final defeat to Argentina that the Italians conceded their first goal of the tournament, Claudio Caniggia headed past a hesitant Zenga to send the game to penalties. A shootout that proved one step too far for the hosts as the nation mourned their exit in Naples with the final within touching distance.

Knowing then what we know now maybe coach Azeglio Vicini should have turned to Zenga’s understudy Gianluca Pagliuca for the penalty shootout. The Sampdoria man had yet to cement his reputation as the penalty takers worst nightmare.

Pagliuca was born at Sant’Orsola hospital in Bologna the year Italy were stunned by North Korea at the World Cup in 1966. He joined his hometown club as a school-boy, but it would take a move 300 km west when he finished school that would kickstart a career that would last 20 years. The man who came to be known as ‘The Wall’ made his debut for Sampdoria during the 1987-88 season and quickly deposed Guido

Bistazzoni as the Blucerchiati number one, even winning a Coppa Italia medal in his first season at the Stadio Luigi Ferraris.

Sampdoria were formed in 1946 when two clubs, Sampierdarenese and Andrea Doria merged. They were a steady yet unsuccessful side in their formative years and could often be found in and around midtable in the top flight with the odd sojourn to Serie B thrown in occasionally. All of this changed dramatically when millionaire businessman Paolo Mantovani bought the club in 1979. The Roman entrepreneur vowed to put an end to the days in Serie B and set about bringing the Genoese club to the Serie A top table.

The masterstroke came in 1986 when Vujadin Boskov took charge and within five years the Blucerchiati were ready to thumb their nose at the established hierarchy of reigning champions Napoli, Juventus, AC and Inter Milan. By this time Italy was the place to be for any aspiring top-class footballer. The glitz and glamour of the footballing peninsula brought players in from far and wide. With a rule of only three overseas players allowed per squad though the margin for error was slim.

Both Milan giants added a triumvirate of players from the same country, AC opted for a trio that won at Euro 88 with the Netherlands in Marco van Basten, Ruud Gullit and Frank Rijkaard. Inter took a similar approach yet they opted for three German World Cup winners in Lothar Matthaus, Jurgen Klinsmann and Andreas Brehme. Not to be outdone, Juventus broke the bank to add Azzurri darling Roberto Baggio much to the chagrin of Fiorentina fans and Thomas Hassler also joined fresh from his World Cup win with the Nationalmannschaft.

in unity. A squad of young stars suitably aided and abetted by unheralded heroes went up against the best Europe had to offer. The goals of Gianluca Vialli and Roberto Mancini, coupled with the stoic Pietro Vierchowod at the heart of a backline in front of the giant Pagliuca, Boskov had found a recipe for success. Back to back Coppa Italia wins and a narrow defeat to Barcelona in the European Cup Winners Cup final was the set up for victory in the following years competition, Pagliuca kept a clean sheet in a 2-0 win over Anderlecht. The now 24-year-old goalkeeper’s stock was on the rise and he was heading for a career defining season, one which steered him towards international recognition.

La Samp had never finished above fourth in the league before and got off to a slow start with injured talisman Vialli missing the opening games. His return garnered goals and more importantly wins, his partnership with the irrepressible Mancini who probed and pressed saw them rise up the table. Home and away wins over both Milan sides and Napoli, the second a 4-1 hammering in Maradona’s final game for the Partenopei.

Two late goals beat Inter, no mean feat yet even more impressive considering Sampdoria were down to 10 men. The return 2-0 victory at the San Siro all but sealed the title. Inter bombarded Pagliuca’s goal with 24 shots but ‘The Wall’ stood firm. His 6’ 4in frame also kept out a Matthaus penalty despite being bombarded with missiles and flares from the Nerrazzurri Ultras in the Curva Nord. A comprehensive 3-0 win over Lecce two weeks later sealed the Blucerchiati’s first Scudetto.

Expectations had risen the following season and the pressure began to tell. League performance fell away with Sampdoria even flirting with relegation at one point before  an eventual recovery took them to a more respectable sixth place. Their maiden participation in the European Cup was a different story, La Samp comfortably dispatched Rosenborg and Honved before topping a group that contained old adversaries Anderlecht and the crack Serbian side Red Star Belgrade.

The reward was a final against Barcelona at Wembley, in what would be the last European Cup. Barca’s attacking threat of Hristo Stoichkov and Jose Salinas was stifled by the Sampdoria defence expertly marshalled by Vierchowod. Vialli missed several chances, with some questioning whether an impending move to Juventus had turned his head. Pagliuca kept Michael Laudrup at bay and even had the post to thank for one Stoichkov effort.

Vialli was replaced and with it went Samp’s hopes of victory, their best chance now was to hop for penalties and put faith in Pagliuca who had made saving them an art form. Ronald Koeman had other ideas though and in extra time he rifled an indirect free kick past Pagliuca for what would be the only goal of the game.

As the squad started to break up Pagliuca had usurped Zenga in the national team and was the number one for the 1994 World Cup in the USA. His tournament got off to les an auspicious start, when Jack Charlton’s Republic of Ireland upset the Azzurri 1-0 in their opening match. A scooped Ray Houghton shot dipped over a stranded Pagliuca and into the goal before the Samp stopper saw red in the second game, dismissed for handling the ball outside of his area as Norwegian Oyvind Leonhardsen bore down on him.

Italy limped through the group stages finishing third with Pagliuca suspended for the next two games. He was back in the line-up for what two weeks earlier seemed an

unlikely semi-final with Bulgaria. Italy, notorious slow starters in tournaments had grown into this World Cup, the goals of Roberto Baggio had saw them past Nigeria and Il Divin Codino hit another brace in a 2-1 win to secure a place in the final where Brazil awaited.

The heat of Pasadena sapped the life out of the game as it edged towards a penalty shootout. Despite Pagliuca making history by being the first goalkeeper to save a penalty in a World Cup shootout, Baggio turned from hero to villain and sent his penalty into the California sky and handed the trophy to the Selecao.

Pagliuca got over this disappointment by joining Inter Milan with former mentor Zenga going in the opposite direction. His £7.5m move was a record for a goalkeeper and would stand for seven years until Buffon left Parma for Juventus in a deal worth a whopping £53.5m. His imperious form continued at the San Siro and although he won a UEFA Cup winners medal there he never challenged for the Scudetto again. Despite chairman Massimo Moratti bankrolling the club and signing such players as Ronaldo and Ivan Zamorano his trigger-happy nature with managers was much to the detriment of the side and any stability they hoped for.

The emergence of Angelo Peruzzi had cost Pagliuca his place in the national side with the Juventus man making the position his own at Euro 96. When injury struck, Pagliuca returned for France 98 and added to his reputation by saving another penalty, this time in the quarter final against the hosts. Pagliuca’s heroics couldn’t be replicated in the following shootout and Italy faced heartache again. When Marcello Lippi took over the Nerrazzurri in 1999 history repeated and Peruzzi left the Old Lady and took Pagliuca’s place at club level too. ‘The Wall’ returned home and spent seven seasons with Bologna, starring in the game that relegated Sampdoria to Serie B, something which didn’t go down well with the Samp tifosi.

One more season with Ascoli and Pagliuca called it a career at the age of 41. His career spanned three decades yet due to the strength of the goalkeeping position in his home land he only won 39 caps for the Azzurri. The generational talents of Pagliuca alongside Luca Marchegiani, Francesco Toldo, Peruzzi and Buffon spoke volumes about the quality that Italy goalkeeping had to offer in the 90’s and 00’s. He may not be spoken of in the same breath as Zoff and Buffon, yet his 592 career appearance and 24 Serie A penalty saves to with domestic and European trophies, Gianluca Pagliuca can go down as one of the best goalkeepers the Nineties had to offer.