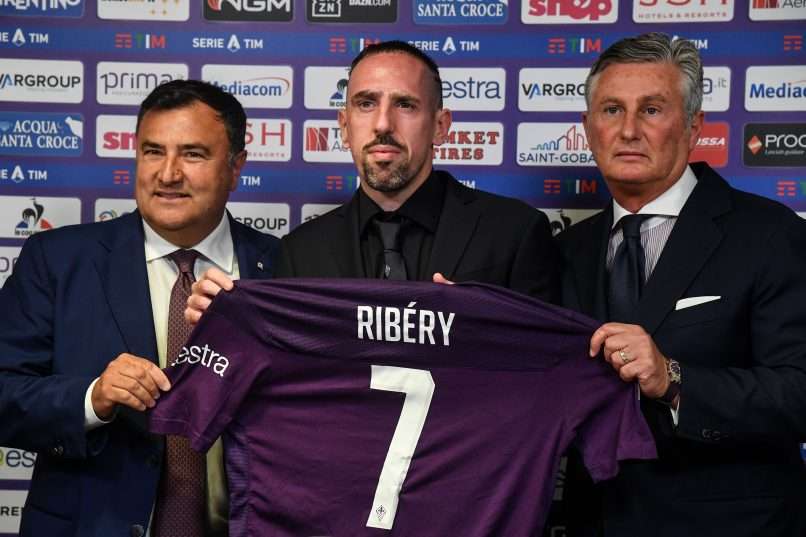 Born in the Roman neighborhood of Aventino, Daniele Pradè has spent most of his adult life in the game of calcio. Starting with directorial roles with smaller clubs like Spes, Olmi, Fano, Ferentino, Teramo and Frosinone, his big break came when he joined AS Roma in 2000 to collaborate with former Tottenham Sporting Director Franco Baldini.

When Baldini resigned in 2004, Pradè was appointed as the new Sporting Director at Roma. One of his first official acts as Roma Sporting Director was to hire Luciano Spalletti as manager. Pradè and Spalletti won 2 Coppa Italia, 1 Supercoppa Italiana and 3 second place finishes in the 4 seasons spent together.

During this time, Pradè brought in players like Rodrigo Taddei, Mirko Vucinic, David Pizarro, Jeremy Menez and John Arne Riise. Midway through the 2009-2010 season with Roma, Pradè contended with the resignation of Luciano Spalletti and replaced him with Claudio Ranieri who guided them to another second place finish.

However, things started to unravel for Pradè and Roma when they finished in sixth place in the 2010-2011 season. Claudio Ranieri was forced to resign and was replaced by Vincenzo Montella. The 2010-2011 season would be Pradè’s last season as Roma’s Sporting Director. He handed in his resignation on July 15th, 2011 and was replaced by Walter Sabatini.

After taking a year off, Pradè returned to Serie A on May 25th, 2012 as Fiorentina’s new sporting director. He replaced Pantaleo Corvino, who left earlier that year.

Pradè arrived at the Viola after an erratic season where the club had 3 managers (Sinisa Mihajlovic, Delio Rossi and Vincenzo Guarini. An incident that exemplified Fiorentina’s horrendous season was when manager Delio Rossi physically confronted his own player Adem Ljajic and was promptly sacked.

Pradè was entrusted to find a new manager and to rebuild the squad to challenge for the European spots. During his first transfer window, he brought in such players as David Pizarro and Alberto Aquliani, whom he knew from his time at Roma.

The majority of these players would be become instrumental for a few more seasons to come. During the January transfer window, Pradè had acquired Giuseppe Rossi, who would eventually become Fiorentina’s talisman prior to his devastating knee injury.

He also hired Vincenzo Montella as Fiorentina’s manager after his record-breaking points total with Catania in the 2011-2012 Serie A season. His hiring was seen as a gamble because he only had a half season with Roma and one full season with Catania as his prior experience before joining Fiorentina.

The gamble paid off and the Viola finished in fourth place in Serie A, which guaranteed them a place in the Europe League for the 2013-2014 season, and they also reached the Coppa Italia Quarter-Finals. The difference between the numbers of the 2011-2012 and 2012-2013 seasons are striking.

As a result, Montella won the 2012-2013 Enzo Bearzot Prize for the season’s best manager in Serie A. Credit is also due to Pradè who built the squad that would be at Montella’s disposition.

The 2013-2014 campaign would be a continuation Fiorentina’s success from the previous season. Pradè brought in notable players like Marcos Alonso, Joaquin, and Mario Gomez.

Giuseppe Rossi would be starting his first full season with the club and he would be that season’s revelation, as he would top Fiorentina’s scoring charts and form a solid partnership with Mario Gomez. In July 2013, Pradè would sell Stefan Jovetic to Manchester City for 30 million euros and replace him with Palermo’s Josip Ilicic for a fraction the cost.

No ill effects were felt, as Fiorentina once again finished in fourth place in Serie A with 65 points, 65 goals scored and 44 goals against. They also finished as Coppa Italia runners-up by losing in the finals against Napoli. They were knocked out in the Europa League Round of 16, as they lost to their league rivals Juventus.

As a reward for their good season, Fiorentina offered Pradè a contract extension until June 2015. There was a visible shift in the transfer market policy for the 2014-2015 season, as the Della Vale family tighten the purse strings which forced Pradè to bring multiple players on loan.

Marko Marin, Jasmin Kurtic and Micah Richards were brought in on loan during the summer transfer window. He also signed Milan Badelj on a permanent transfer for a fee of 4 million euros and Badelj continues to play an important part for the club today, as he has always started for manager Stefano Pioli when available.

Fiorentina’s record by January 2015 was 6 wins, 6 draws and 4 losses for a total of 24 points in Serie A. They only had 5 losses in all competitions. They were in potential crisis as it was not certain that they would finish in the European spots at the end of the season.

Pradè orchestrated the sale of Juan Cuadrado to Chelsea for 31 million euros and replaced him with Mohamed Salah, who was struggling for playing time after his breakout season with Basel. He also brought in Alberto Gilardino on loan for his second stint at the club. With an attacking trident of Giuseppe Rossi, Mario Gomez with Alberto Gilardino as a replacement, and Mohamed Salah, Fiorentina finished in fourth place for the third season in a row.

They also finished as a semi-finalist in the Coppa Italia and the Europa League. Pradè was rewarded for his work with a contract extension until June 2016. Montella left Fiorentina in June 2015 and was replace by Paulo Sousa as manager, who had a successful stint at Basel and has Serie A experience from his playing days at Juventus.

Pradè’s first task for the 2015-2016 season was to replace Mohamed Salah, as his loan expired and was sold to Roma by Chelsea. Salah’s goals were replaced by Nikola Kalinic, who 13 goals in all competitions. Pradè brought in Mario Suarez on a permanent transfer as part of the deal that sent Stefan Savic to Atletico Madrid for 10 million euros. He also sent Mario Gomez on loan to Besiktas, as he looked to rejuvenate the squad.

The squad evidently regressed under Paulo Sousa, as Fiorentina finished fifth in Serie A and were knocked out of the Europa League in the Round of 32 and in the Coppa Italia in the Round of 16. At the end of the season in May, Fiorentina announced that they will not renew Pradè’s contract and that he would leave the club.

After a taking short layoff, Pradè signed a contract to join Sampdoria as their technical director in October 2016. He was hired after a record of only 2 wins, 2 draws and 4 losses right before the season’s first Derby della Lanterna which Sampdoria won 2-1.

Following a difficult 2016-2017 season that saw Sampdoria finish in tenth place in Serie A with 48 points, the Blucerchati sought to make some changes for the upcoming 2017-2018 season. The most notable event was the sale of Patrik Schick to Roma for a potential figure of 40 million euros. Another notable event was the sale of Milan Skriniar to Inter for 18 million euros plus Gianluca Caprari, who helped to replace the loss of Patrik Schick.

Pradè and Sampdoria quickly re-invested the profits to purchase Duvan Zapata from Napoli on loan with an obligation to buy. Gianluca Caprari was an intriguing signing for Sampdoria, as he is still only 24 years old with a full season in Serie A with Pescara in 2016/2017 where he scored 9 goals. Caprari has 16 appearances and scored 4 goals so far for Sampdoria this season.

He continued the rebuilding process by selling Luis Muriel to Sevilla for 20 million euros and brought in Gaston Ramirez for 11 million euros and Dawid Kownacki, who is being hailed as the next Robert Lewandowski, for an undisclosed fee. Kownacki made 117 appearances with Lech Poznan and scored 27 goals. He has made 12 appearances in all competitions for Sampdoria and has scored 6 goals this season for a minute per goal ratio of 256 minutes per goal.

These transfer moves paid off as Sampdoria contended for a European spot last term. Their success should not come as a surprise because Pradè has a good track record in rebuilding squad after a period of disappointment. His modus operandi is to hire an attack-minded manager like Luciano Spalletti and Vincenzo Montella, to unearth little known talents like Dawid Kowancki and to give chances to players who have been struggling for playing time like Duvan Zapata and Gaston Ramirez.

It is for these reasons that Daniele Pradè is the master of rebuilding. In June 2018, Sampdoria decided to replace Pradè with Walter Sabatini after the blucerchiati’s failure to reach the Europa League spots.

It did not take long for Pradè to find a new job and he was quickly hired by Udinese to rebuild their squad after their horrendous campaign last season, in which the Zebrette were almost relegated to Serie B. One of his first signings was ex-Juventus midfielder Rolando Mandragora, who was on loan at Crotone last season and become a pillar in their midfield, as the Calabrian side just barely missed survival.

Udinese spent a club record fee of 20 million euros for the player with Juventus retaining a buyback clause of 26 million euros until 2020. The new season has not even started yet and Pradè and Udinese have already signaled their intentions to return to the top half of the table in Serie A.

Sixteen games in, and Udinese had not shown any improvement when compared to the previous campaign, as they fired their manager that started the season, Juilo Velazquez, after losing 7 of 12 Serie A games in charge.

Pradè and the rest of the board of directors chose Former Crotone hero Davide Nicola to save them from the drop once again.

The Zebrette placed their hopes in Nicola to perform a similar miracle like he did at Crotone, but failed and re-hired former Juventus defender Igor Tudor in March 2019.

This change benefitted newly-acquired January signing Stefano Okaka, who single-handedly save Udinese from relegated and finish in 12th place.

Pradè returned to Fiorentina in July 2019 to rebuild the club after they were almost relegated the previous season. Along with new owner, Rocco Commisso, he made some important signings, Kevin-Prince Boetang and Franck Ribéry, to immediately improve the quality of squad.

Pradè, along with manager Vincenzo Montella, promoted midfielder Gaetano Castrovilli to the first team and has caught the eye of Italian CT Roberto Mancini. The triumvirate of Commisso, Pradè and Montella seems destine to bring Fiorentina back from the disappointing results of the past few seasons.