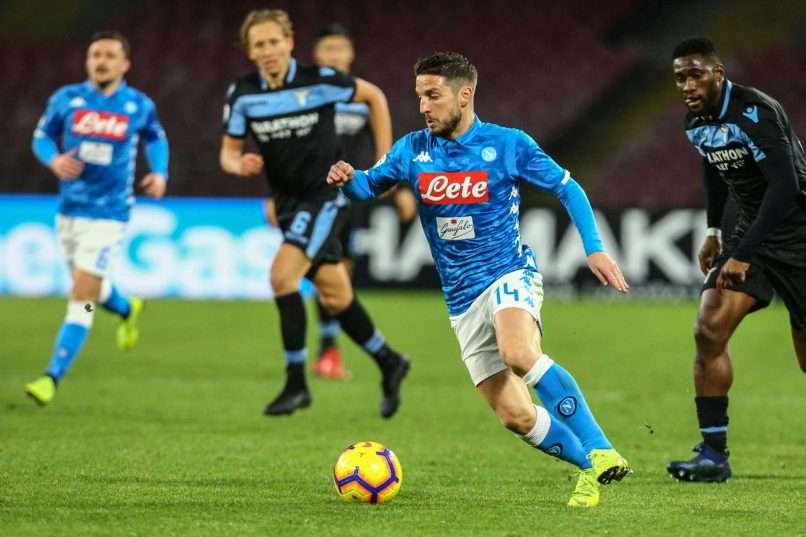 Napoli defied a trio of suspensions to key players to overcome Lazio 2-1 in Naples on Sunday evening. The hosts entered the game without Kalidou Koulibaly, Allan and Lorenzo Insigne, but put this to one side as they controlled the contest for long periods.

Carlo Ancelotti’s men hit the post twice in the opening quarter of the match, through Arakadiusz Milik and then via the shoulder of Lazio defender, Stefan Radu. With Luiz Felipe coming off due to injury, the momentum was firmly in Napoli’s favour, and they struck twice in the space of three minutes just after the half-hour mark to take full control. Jose Callejon opened the scoring after being played through by Dries Mertens, and a perfectly-placed Milik free-kick doubled Napoli’s advantage.

Napoli had chances to wrap up victory after the break, Fabian and Callejon becoming the latest players to be denied by the woodwork. Instead, Lazio gave themselves hope, Ciro Immobile producing a precise finish to halve the deficit. However, their joy was to be short-lived, as Francesco Acerbi was shown a red card twenty minutes from time after a late tackle, ending any chance of a late fightback.

Lazio’s struggles in the big games continue, they have failed to beat any of the current top eight sides so far this season. Meanwhile, Napoli extended their lead over Inter Milan in the race for second place to seven points, and have now won six of their last seven league matches.

Roma started the second half of the season with a win, battling past Torino 3-2. Nicolo Zaniolo and Aleksandar Kolarov put Roma in a commanding position, but they were pegged back by goals from Tomas Rincon and Cristian Ansaldi. Substitute Stephan El Shaarawy netted the winner, ensuring Roma leapfrogged their city rivals, Lazio, into fifth place.

Atalanta laid down a marker to their rivals for a European spot, thrashing a sorry Frosinone side 5-0. Duvan Zapata added another four goals to his tally, meaning that he has now scored 13 goals in his last 7 league games. Gianluca Mancini also found the net for Atalanta who jump to seventh and are just three points outside the top four.

Juventus beat the bottom club Chievo 3-0 in Turin to continue their march towards the title. Douglas Costa opened the scoring with a fine run and finish, with Emre Can and Daniele Rugani rounding off the scoring. It was a night to forget for Cristiano Ronaldo though, who had a penalty saved and was guilty of some glaring misses in the second half.

Fiorentina and Sampdoria played out a thrilling 3-3 draw on Sunday afternoon. Luis Muriel scored twice against his former club, the second a stunning solo goal. Yet Fiorentina had to play over half the game with ten men when Edimilson Fernandes was sent off, and it almost proved costly as Sampdoria took a 3-2 lead thanks to Gaston Ramirez and a Fabio Quagliarella brace. Fiorentina were able to respond at the death, as German Pezzella steered in from close range to earn his side a point.

Cagliari needed a last minute goal to draw 2-2 at home to Empoli. Leonardo Pavoletti had given the hosts the lead, only to see Giovanni Di Lorenzo and Miha Zajc turn the game in Empoli’s favour. It was left to Diego Farias to come off the bench and latch onto a through ball in the 91st minute to deny Empoli a crucial win in their battle for survival.

AC Milan, missing Chelsea-bound Gonzalo Higuain, picked up a 2-0 win against Genoa to move into the top four. Gianluigi Donnnarumma had to be on top form to keep out Genoa on a couple of occasions, and his efforts were rewarded when Fabio Borini and Suso secured victory with goals inside the final twenty minutes.

Inter Milan slipped further behind Napoli, as they were held to a goalless draw by Sassuolo. Sassuolo created the better chances in the closing stages but were denied all three points by Inter goalkeeper, Samir Handanovic. Inter have now failed to beat Sassuolo in any of their last five meetings, a run that stretches back to December 2016.

Parma won 2-1 against Udinese to move into the top half on Saturday evening. Roberto Inglese’s penalty had been cancelled out by Stefano Okaka, before Gervinho broke from an Udinese corner to score the winner midway through the second half.

In the relegation battle from the weekend, SPAL and Bologna shared the spoils in a 1-1 draw. Bologna were heading for victory when Rodrigo Palacio put them in front, but they could not keep hold of their advantage, Jasmin Kurtic levelling matters shortly after the hour mark. Bologna remain inside the relegation zone, three points from safety.