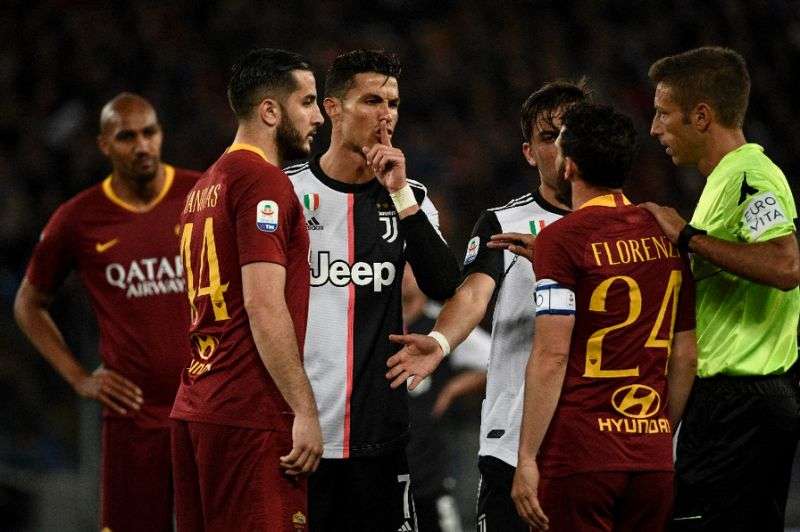 Roma scored twice in the final 11 minutes to maintain the pressure on the top four as they beat Juventus 2-0 on Sunday night in Rome. Having already seen all of their rivals for European places win before them, Roma knew that only three points would suffice. They were able to deliver, inflicting a third league defeat of the season on Juventus in the process.

Earlier this week, manager Claudio Ranieri announced that he will be leaving Roma at the end of the season. Roma had lost just two of their games since he took charge in March, meaning that they were still in the fight for Champions League football. That would have all changed if they had come off second best to the champions.

With all the pressure on Roma, it was unsurprising that they started nervously. Juventus took control of the game from the outset, and had two early chances to take the lead, only to be scuppered by stunning saves from Antonio Mirante. The first opening came following a swift counter attack, ending with Emre Can squaring the ball for Juan Cuadrado who forced a diving stop from Mirante. The veteran keeper was called into action a few minutes later as well, denying Paulo Dybala after a mazy run from Cristiano Ronaldo.

Roma needed to show that they could be a threat themselves, and fashioned a clear opportunity of their own. Lorenzo Pellegrini had Justin Kluivert free in the area, only to badly miscue his cross. However, his sliced attempt wrong-footed Wojciech Szczesny, leaving the Pole helpless as he watched the ball clip the crossbar and go over.

Having seen their own woodwork rattled, Juventus decided to even up the score. Dybala was again teed up by Ronaldo, but his volley was tipped onto the inside of the post by Mirante, somehow staying out.

Despite the chances that had been so frequently created, the score was 0-0 at the break. Juventus will have wondered how, and they had more chances to go ahead in the second half. Emre Can forced Mirante into a stop with his feet, whilst Ronaldo did find the net, only to be flagged offside after marginally mistiming his run.

Yet Roma were starting to hold their own, and in the 79th minute, they seized their moment. Giorgio Chiellini and Leonardo Spinazzola were briefly caught out of position, allowing Edin Dzeko to slide a through ball into the path of Alessandro Florenzi. Roma’s captain on the night took the ball in his stride and delicately dinked it over the onrushing Szczesny.

It seemed that Roma would face a nervy final ten minutes as they looked to see out the game, but Juventus’s expected onslaught on the Roma goal did not arrive. Instead it was Roma who looked the more dangerous, and they put the result beyond doubt with the final attack of the game. Cengiz Under raced through and found Dzeko, who coolly fired past Szczesny.

That is seven games unbeaten for Roma who are three points adrift of 4th place with six points still up for grabs. Meanwhile, Juventus have only won one of their last seven games in all competitions, as speculation surrounding Massimiliano Allegri’s future rumbles on.

Atalanta beat Genoa 2-1 on Saturday afternoon to remain on course for a Champions League spot. This was Atalanta’s fourth straight league win, secured with a fine second half display. After a below-par first half, Musa Barrow gave Atalanta the lead within a minute of the restart, with Timothy Castagne doubling their advantage in the 54th minute. Goran Pandev pulled one back for Genoa late on, but Atalanta held on to edge nearer to Europe’s elite competition.

AC Milan overcame Fiorentina 1-0 in Florence to keep their hopes of a top four finish alive. Hakan Calhanoglu’s first half header was the difference between the sides, as Milan stood firm after the break. This was Milan’s second win of the week, and keeps them three points behind Atalanta heading into the penultimate weekend.

Inter Milan were made to work for a 2-0 victory over Chievo on Monday which took them back to 3rd in the table. Matteo Politano’s precise finish broke the deadlock shortly before half time, and Inter’s task was made easier when Nicola Rigoni was sent off for Chievo with 14 minutes left. Ivan Perisic gave Inter breathing space four minutes from time, meaning that Inter stay four points clear of Milan and Roma.

Andrea Belotti came to Torino’s rescue as they beat Sassuolo 3-2 to ensure that they remain in the hunt for Europa League football next season. Mehdi Bourabia put Sassuolo in front, but was then sent off after 28 minutes. When Belotti equalised in the 56th minute it seemed that Torino had the momentum, yet Sassuolo retook the lead in the 71st minute through Pol Lirola. However, Simone Zaza levelled the game again with nine minutes to go, before Belotti netted a stunning acrobatic effort to keep Torino in 7th spot.

Lazio responded well to last week’s defeat to Atalanta, battling past Cagliari 2-1. Whilst their best chance of earning European football may be through winning the Coppa Italia, Lazio made sure that they could still do so via their league position, with Luis Alberto and Joaquin Correa scoring either side of half time. Leonardo Pavoletti halved the deficit in added time, but it was not enough for Cagliari who are still not quite safe with two games remaining.

Napoli beat SPAL 2-1 on Sunday evening to make it three consecutive wins for Carlo Ancelotti’s men. With neither side having much to play for, an open game ensued, with chances at either end. Allan put Napoli in front four minutes after half time, only for Andrea Petagna to level things up from the spot in the 83rd minute. It was left for Marco Rui to be Napoli’s hero, scoring the winner two minutes from time.

Battle at the bottom

Empoli made it back-to-back wins on Sunday by beating Sampdoria 2-1 to close to within one point of safety. Diego Farias and Giovanni Di Lorenzo were the scorers, whilst Fabio Quagliarella replied from the penalty spot to move to 26 league goals for the season. Having looked doomed a fortnight ago, Empoli have given themselves a fighting chance, though they face a tough run-in against Torino and Inter Milan.

Udinese picked up a crucial win of their own, cruising past Frosinone 3-1 to stay two points above the bottom three. The job was completed in the first half, as a Stefano Okaka brace either side of a goal from Samir put Udinese 3-0 up at the interval. Federico Dionisi scored a consolation for already-relegated Frosinone in the 85th minute.

Bologna thumped Parma 4-1 to take a huge step towards securing another season in the top flight. Having wasted numerous chances in the first half, Bologna were clinical after the break, although they were helped by two own goals. Riccardo Orsolini broke the deadlock, with Luigi Sepe then scoring an unfortunate own goal when a free-kick rebounded into the net off his arm. Parma’s captain Bruno Alves was then given his marching orders, which Bologna took advantage of, extending their lead through Lyanco. Roberto Inglese got Parma on the scoresheet, only for a calamitous own goal from Francisco Sierralta to round off a dreadful day for Parma who are just three points above the drop zone.

The Beautiful Game Confronts the Ugly Vice: Racism and the Role of Soccer in Integrating Immigrants into Italian Society