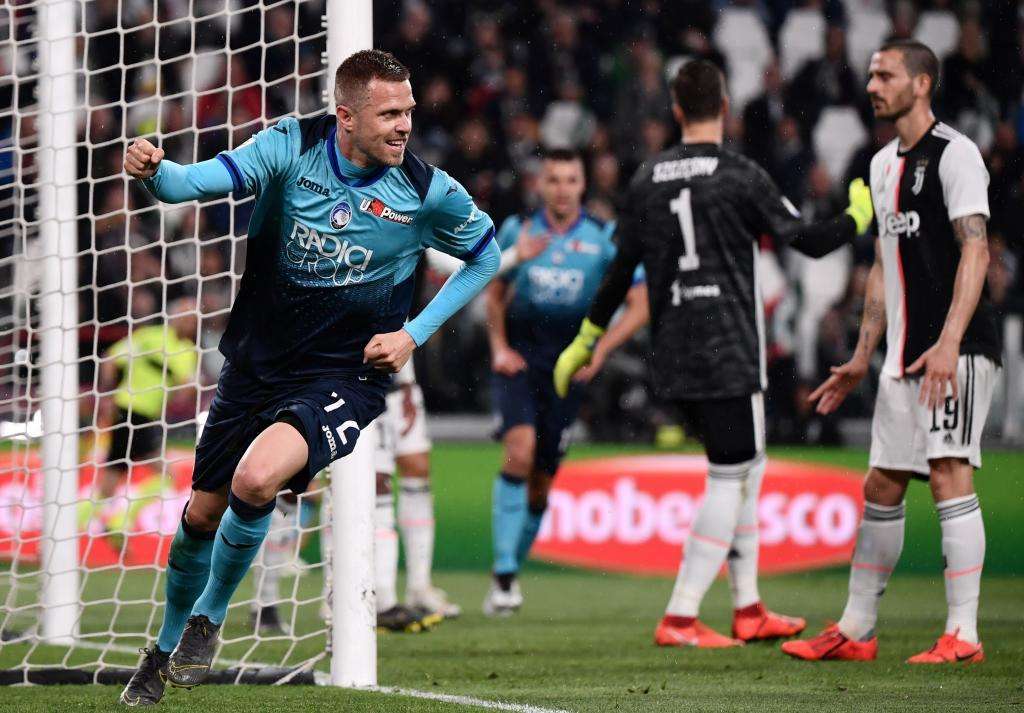 Juventus and Atalanta played out a 1-1 draw on Sunday night in a result that keeps Atalanta on course for a Champions League spot. It had seemed that Atalanta were set for a crucial victory when Josip Ilicic gave them a first half lead, but Mario Mandzukic levelled with ten minutes to go to deny them.

For Juventus, this was a night of celebration. The runaway champions were finally presented with the league trophy, whilst with this being the final home game of the season, it was a chance to bid farewell to the departing Massimiliano Allegri and Andrea Barzagli.

Allegri’s time as manager was confirmed to be ending on Friday, with the 51 year old leaving having secured five Scudetti and four Coppa Italia’s during his tenure. Barzagli has struggled with injuries throughout this season, yet bowed out to a hero’s reception. The centre back has played his part in all eight of Juventus’s title triumphs since 2011.

As for the game itself, this was the chance for Atalanta to get back on track following their Coppa Italia final defeat to Lazio last week. Many wondered if that loss would be hard to recover from, and they almost got off to the worst possible start here. A swift Juventus attack inside the opening minute saw Juan Cuadrado feed Cristiano Ronaldo with the goal at his mercy. There is usually only one outcome in this scenario. Not this time, as the striker fired his effort well over the bar.

Gradually Atalanta started to find their feet. Duvan Zapata has enjoyed a fine season leading the line, and he almost gave the visitors the lead. His powerful run took him past the Juventus backline, yet his effort under pressure slipped just the wrong side of the post. So close to the breakthrough, but they did get their goal in the 34th minute. Alejandro Gomez’s corner was flicked on at the near post, with Ilicic arriving at the back post to tap home into the unguarded net.

A big moment for Atalanta, yet Juventus did not seem too worried. Nothing could take the shine off their night. Early in the second half, the board went up to show the number 15. Barzagli’s time was up. The veteran defender walked off with tears in his eyes for the final time, embracing with his teammates before going on a lap of honour around the ground to thank the fans.

His replacement, Mario Mandzukic, was returning from a month on the sidelines and was ready to make his mark. With the clock ticking into the 80th minute, he did. Cuadrado’s deep cross appeared harmless, only for Mandzukic to produce a volley on the stretch that sneaked through the legs of Pierluigi Gollini and into the far corner. A huge ten minutes lay in store for Atalanta.

Federico Bernardeschi tried his luck from long-range, but his shot was parried to safety by Gollini as Juventus finished strongly. The evening was to end on a sour note for Bernardeschi though, as his reckless lunge in added time earned him a straight red card, meaning that his season is over.

Atalanta have moved up to third heading into the final weekend, just a point above the Europa League places. Their destiny is in their own hands, as a dramatic final day awaits.

Race for the top four

Atalanta were able to move up to third due to a dreadful showing from Inter Milan who were comprehensively beaten 4-1 by Napoli. Knowing that a win would secure them a top four berth, Inter were outclassed from the start, falling behind to a stunning strike from Piotr Zielinski, with Dries Mertens and a Fabian Ruiz brace putting the gloss on Napoli’s display. Mauro Icardi’s late penalty was a mere consolation for Inter, who are now just one point ahead of their local rivals AC Milan.

AC Milan kept up the pressure on Atalanta and Inter by seeing off Frosinone 2-0. The Rossoneri had their goalkeeper Gianluigi Donnarumma to thank, as he made a crucial penalty save from Camillo Ciano in the early stages of the second half. Krzysztof Piatek finally broke the deadlock, and Suso’s sumptuous free-kick ensured that Milan go into the final day ready to take advantage of any slip-up from the two sides directly above them.

Roma’s hopes of finishing in the top four all but ended on Saturday night as they were held to a 0-0 draw by Sassuolo. After beating Juventus last week it seemed that Roma were entering the final two games with momentum, but this setback alongside the announced departure of Daniele De Rossi completed a miserable week for the side who appear destined for just Europa League football next season.

Empoli moved out of the bottom three by thrashing Torino 4-1, ending Torino’s hopes of European football for next season in the process. Afriyie Acquah’s opener was cancelled out by Iago Falque, but Empoli produced a stunning final half hour to secure their third straight win. Matteo Brighi restored Empoli’s advantage, prior to Giovanni Di Lorenzo and Francesco Caputo adding goals that capped off a remarkable performance. Empoli are a point clear of the drop zone ahead of a final day showdown with Inter.

Bologna confirmed their place in Serie A next season by drawing 3-3 with Lazio in Rome. Lazio took a first half lead through Joaquin Correa, only to see Bologna turn the game on its head five minutes after the interval with goals from Andrea Poli and Mattia Destro. Bastos put Lazio back on level terms, before Riccardo Orsolini made it 3-2 to Bologna. Sergej Milinkovic-Savic’s late free-kick rescued a point for the hosts, but Bologna were able to hold out in the closing stages to remain a Serie A club.

Another club who will be staying in Serie A next year are Parma after they overcame Fiorentina 1-0. Parma have suffered a downturn in form in the second half of the season, having been mid-table during the winter break. They had to rely on a Gerson own goal ten minutes from time to ensure their survival. Meanwhile, Fiorentina face a nervous final day, with the team not yet safe. Relegation seemed unthinkable, but is now a distinct possibility.

Udinese’s 3-2 win over SPAL on Saturday afternoon has taken them to the brink of safety. For the second week in succession, Udinese took a 3-0 lead into half time, with Stefano Okaka’s double adding to Samir’s early goal. Yet they were forced to hang on after the break, as Andrea Petagna and Mattia Valoti pulled goals back for SPAL. The final whistle was greeted by relief from the Udinese fans, who look set for another year in the top-flight.

Genoa are the side who will enter the final weekend in the relegation zone after they could only draw 1-1 at home to Cagliari. Leonardo Pavoletti’s goal late in the first half looked to have given Cagliari all three points, but a controversial 89th minute penalty from Domenico Criscito earned Genoa a vital point. Giuseppe Pezzella was sent off deep into injury time for Genoa, who will travel to Florence next week needing a positive result to extend their stay in Serie A.

Pellissier bows out with a draw

The one game of the weekend with very little meaning ended goalless, as neither Chievo nor Sampdoria could find the net in Sunday’s lunchtime game. Federico Barba was given his marching orders in the first half following a tackle on Gregoire Defrel. Sampdoria could not take advantage though, and the game will be remembered for bringing down the curtain on Sergio Pellissier’s career. The 40-year-old was substituted in the second half, allowing him to take in the applause from the crowd on his last appearance in Verona.

Inzaghi and Sarri the favorites for Juve job