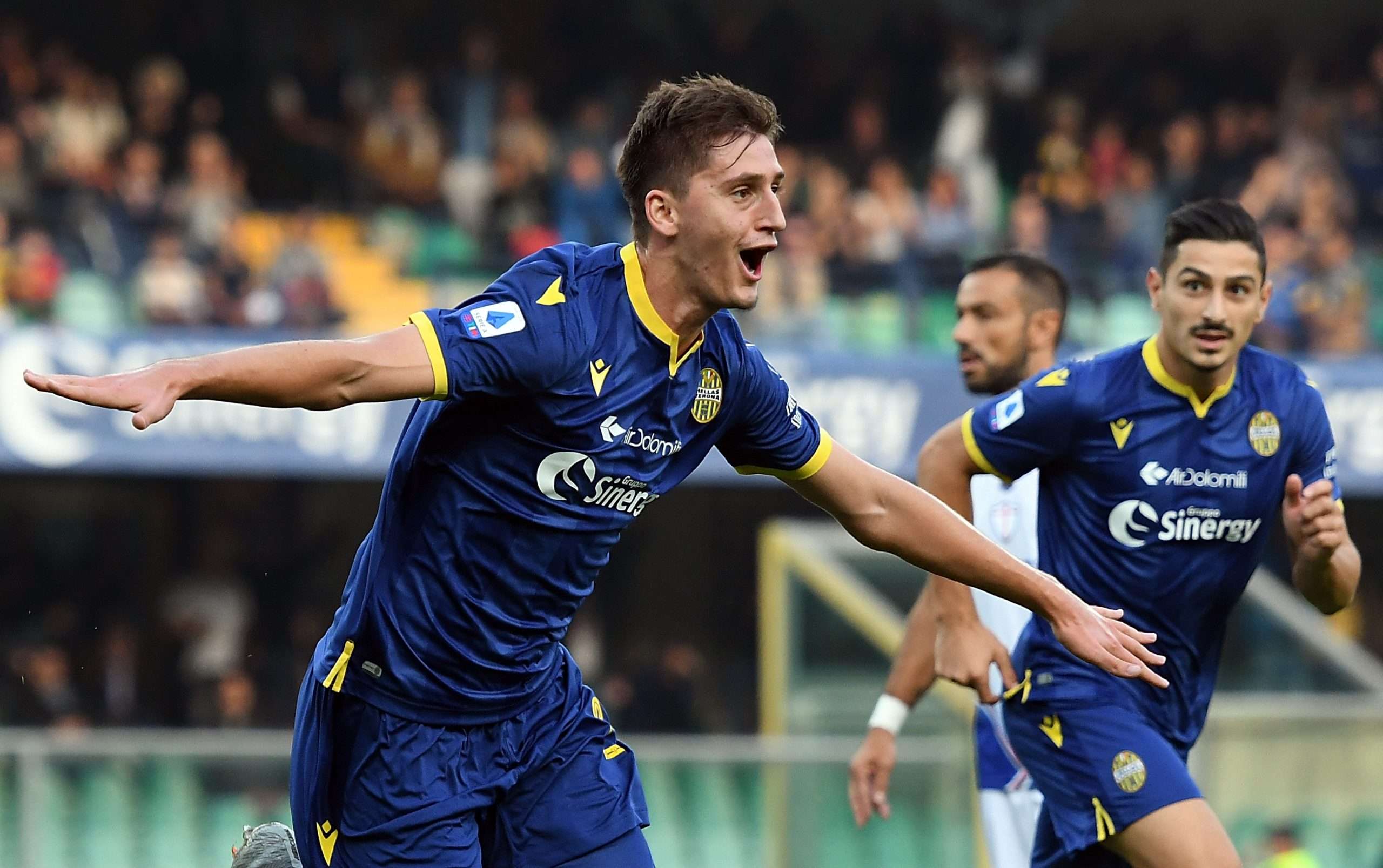 The Serie A season may be on hold for the moment, but that has not stopped transfer speculation, as clubs jostle for position during what could be a shortened summer window.

One of the names to have dominated the headlines in recent weeks has been Marash Kumbulla. The Hellas Verona defender has been linked with some of the biggest clubs in Italy, with Inter and Lazio rumoured to be fighting for his signature, whilst North London rivals Arsenal and Tottenham are also said to be interested in bringing the 20-year-old to the Premier League.

Kumbulla appears to have a decision to make ahead of the next stage in his career, but how did he get into this position in the first place? Here, we take a look at the rapid progression that he has made in his maiden season in Serie A.

With World Cup winner Fabio Grosso in charge for much of the 2018/19 season, Verona had a largely unconvincing Serie B campaign, finishing in fifth place during the regular season. They managed to get things right in the play-offs to secure an unexpected promotion, but it had not been a promising year for Kumbulla. The Albanian centre back was limited to just one substitute appearance in the league, with his solitary start all year coming in the Coppa Italia.

Verona’s business during the summer of 2019 did not appear to signal a change in fortunes for the youngster. Now under new coach Ivan Jurić, the club brought in three new centre backs in the form of Amir Rrahmani, Koray Günter and Salvatore Bocchetti. With Jurić favouring a back three, his defence appeared to be sorted for the year ahead. No place for Kumbulla.

Yet Kumbulla saw things differently. Speaking back in July, he was already looking to prove that he deserved more game time than in the previous season. “I have a great desire for redemption for the many problems of last year”, he told reporters. He was not going to settle for a place on the bench anymore.

That determination appeared to impress Jurić. Heading into the opening game of the season, the Croatian had plenty of options at his disposal. Rrahmani appeared a certainty, but the other two spots were up for grabs. Kumbulla got the nod for one of them following an impressive pre-season. He did not disappoint. Despite the side being a goal and a man down inside the opening 15 minutes, Verona battled back to claim a 1-1 draw at home to Bologna.

It had seemed a brave call from Jurić to go with Kumbulla, but the young defender rose to the occasion on his Serie A debut, repaying the faith shown in him. He had proved that he belonged at this level.

Kumbulla was rewarded for his promising debut by starting each of the next three league matches. However, the fourth game of the season saw him suffer his first setback of the campaign. He was sent off for two bookable offences against Juventus, meaning he had to serve a suspension the following week. It looked as if his hard work to nail down a starting berth in the opening weeks could have been undone.

Unfortunately for Kumbulla, the team kept a clean sheet in his absence, and he was left on the bench when he returned to the squad for the next game. Yet Jurić offered him another chance as the team hosted Sampdoria at the start of October, inserting Kumbulla back into the starting line-up. Once again, the centre-back stepped up to the plate.

Having scored the opening goal, Kumbulla put in a disciplined display at the back, helping the side to a comfortable 2-0 win. He had re-established himself in the team.

He would suffer further misfortune the following month, though. In early November, a hamstring injury forced him off against Brescia, and kept him sidelined for a month. Upon his return, he was swiftly brought back into the team, starting nine games on the trot. It was now hard to imagine the side without him in it.

Maturing before our eyes

When Kumbulla first came into the side at the start of the season, his potential was obvious. However, there were still flaws to his game that needed to be ironed out.

In his first eight appearances, he picked up three bookings and a red card. Two of those yellow cards came within the opening six minutes of games. His rashness meant that he was putting himself under unnecessary pressure for the rest of the match, knowing that another mistimed tackle could see him taking an early shower.

However, he seems to have learnt his lesson. In his last ten matches, he has only been booked once. It has coincided with a run of consistent form that has caught the eye of many admirers. Kumbulla started the opening eight games of 2020, a run which saw Verona go unbeaten throughout January and February. During that period, Verona conceded just four goals, and kept four clean sheets in the process.

No longer diving into tackles, Kumbulla’s decision-making has improved considerably in recent months, and it has clearly benefitted the side. The sign of a good player is to accept mistakes and avoid repeating them. Kumbulla has shown that he could do that this year.

Where will he go next?

Inter appear to be the favourites to sign the youngster at this stage, although Lazio are reportedly stepping up their interest. Both of those clubs have played with back threes this season, meaning that Kumbulla would be able to fit into their systems seamlessly. Antonio Conte and Simone Inzaghi have also shown this season that they are willing to hand opportunities to youth, with Alessandro Bastoni often being preferred to the experienced Diego Godín at Inter, whilst Luiz Felipe has got the nod on plenty of occasions for Lazio.

Meanwhile, Arsenal and Tottenham have looked fragile at the back this season. Verona currently have the best defensive record outside of the top three in Italy, indicating that Kumbulla would be a good acquisition for either club.

Kumbulla failed to quash the rumours about his imminent exit from Verona when he revealed last month that it was his ambition to be “playing in the Champions League”. He has also spoken of his admiration for Juventus’ Giorgio Chiellini, admitting that “he’s the player I’m inspired by”.

Whilst Kumbulla still has a way to reach the level of his idol, his first season in the top-flight has shown that he is on the right track. There may be some uncertainty as to who he will play for next, but there can be little doubt that wherever he ends up, he has a very bright future ahead of him.

Italian FA establishes Serie A, B and C can go ahead, to be completed before August 20