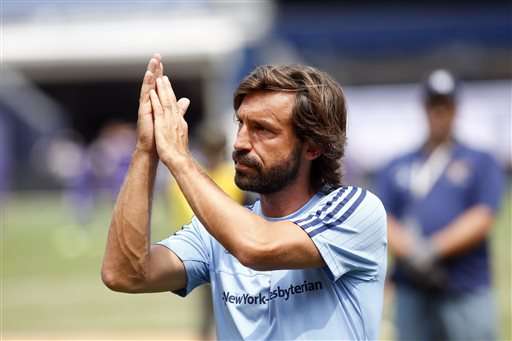 Bronx, NY – This is not the way it was supposed to end. One of the greatest players of his generation and arguably the greatest regista that has ever touched the pitch is ending his career on a baseball field. 38-year-old, Andrea Pirlo, is silently going into the night.

His exquisite touch matched with his iconic hair has made fans love him since his debut with Brescia at the age of 16 in 1995 – almost 23 years ago. He has won numerous awards, both individual and team, including the World Cup in 2006, the Champions League twice, and Serie A Player of the Year on three occasions. Nevertheless, NYCFC Head Coach Patrick Vieira decided the midfield maestro was not needed in the starting lineup when his team faced a 4-1 deficit on aggregate going into Sunday night.

However, it seems the deep-lying playmaker has not made a fuss about his benching to his teammates or his coaches. “He has been a good professional, he has been a really good example for the young players that we have on the team and if they behave and conduct themselves like Andrea they will have a good career” said Vieira, who might see a fine from the MLS for his comments about the refereeing Sunday night.

For most of his career, Pirlo was one of the first names on the team sheet – for almost every game he was healthy enough to play in during his storied career. Not anymore, a player never known for his athleticism or speed has found himself in a position where he cannot get on the field despite still possessing the subsequent skills he has played with his whole career. NYCFC instead went with Alexander Ring and Yangel Herrera as their midfield pairing in the club’s biggest game of their short history against the Columbus Crew in the Eastern Conference Semifinal. Pirlo found himself sitting on the bench for 89 minutes until being substituted on for left-back Ronald Mataritta.

His one play of involvement occurred when NYCFC needed him most. Up 2-0 in the game, but losing 3-4 on aggregate they were searching for the winning goal on aggregate. Pirlo was close to the sideline and was set to put in one his classic finesse crosses to the back post. Except this one was not iconic – 10 yards too far out of reach for a Columbus Crew goal kick. A play that described much of his NYCFC tenure.

A very disappointing end to a prolific career that saw him play in 15 games and start in 14 of them this season. His touch and skill are still there for the legendary midfielder, but he cannot move laterally defensively which hurts him greatly more on this team than on past ones. At Juventus, Pirlo was protecting by two players, usually, Marchisio and Vidal that would put in a lot of work defensively allowing Pirlo to spend less energy in defense, something he was never good at to start with. Vieria has not opted for this approach, preferring a double pivot in midfield that will win the ball and then find Villa or Maxi Moralez to create the team’s offensive chances. A strategy that has no doubt worked for the team this season and one that propelled them to the 2nd seed in the Eastern Conference.

Pirlo’s story could cause some issues for MLS clubs looking to bring in other aging stars to the league from Europe that might not see guaranteed playing time. However, those objecting to that notion would point to Pirlo’s teammate and captain – David Villa who has had a sensational campaign in MLS.

No one is sure what Pirlo’s next move will be, he will probably head back to Italy after his team was just kicked out of the MLS Playoffs. Whatever it may be, he will grace it with class and professionalism just like he did on the field.