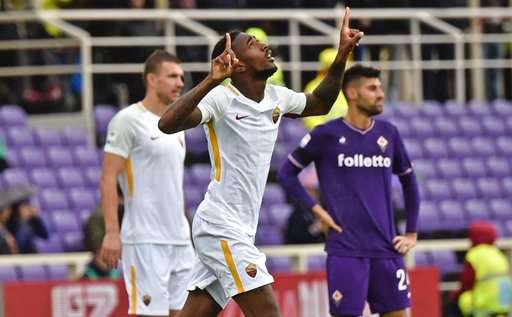 The twelfth week of Italian calcio gave us some interesting results which make the league even tighter than it was a week ago. There were a few really intriguing matches played over the weekend, but we begin in Florence.

Stefano Pioli is a very good coach, and that fact has been clear to see in his work at Fiorentina so far. Despite the loss at Crotone last weekend, Fiorentina have started the season well. Against Roma, fresh from their Champions League demolition of Chelsea, Pioli set La Viola up in a 4-3-3 that read as follows:
Sportiello
Gaspar-Pezzella-Astori-Biraghi
Benassi-Badelj-Veretout
Dias-Simeone-Chiesa

Roma coach Eusebio Di Francesco has also started really well at his new club and his Roma are really starting to gel and display some of the characteristics Di Francesco is well-known for. His team always plays out of a 4-3-3 and he chose the following eleven:
Alisson
Florenzi-Manolas-Fazio-Kolarov
Pellegrini-Gonalons-Nainggolan
Gerson-Dzeko-El Shaarawy

Straight from the first whistle, the contest was played in a high tempo. Roma started better and their high-pressing resulted in an early goal after Nainggolan won the ball from Badelj, found El Shaarawy who set up Gerson in the penalty area. Gerson hasn’t been a regular either under Di Francesco or previously under Luciano Spalletti, but he took his chance well, finishing low along the far post to give Roma the lead. Fiorentina quickly fought back though; Gil Dias beat Kolarov on the right, jinked in-field and found Veretout whose finish was emphatic. 1-1 and not even ten minutes had passed. The style of play employed by Di Francesco has sometimes been nicknamed “calcio verticali” by onlookers and Roma lived up to that nickname at the Artemio Franchi as they successfully created a number of good chances and moved the ball quickly through the thirds from defense to attack. The game was really pulsating as Pioli’s men also created some really good chances but it was Roma who would retake the lead.

Gonalons found some space to run into before feeding Gerson on the right. He took a touch to balance himself before firing low and hard next to Sportiello’s near post which took the goalkeeper by surprise and restored Roma’s lead. Given a rare start, Gerson had really taken his chance with a doppietta of superb goals. Fiorentina rallied again and got an equally sublime goal when Giovanni Simeone powerfully headed Biraghi’s beautiful cross into the net. 2-2, parity restored and the teams headed into the break on level terms after providing the fans present with a spectacular display of football.

Roma came out really strong in the second half and showed why they are title contenders while Fiorentina will have to focus on challenging the likes of Sampdoria, Milan and Torino for Europa League qualification. After only three minutes into the second half, Kostas Manolas headed in a corner to make it 3-2 for the Giallorossi. Fiorentina tried to come back for a third time but Roma would hold firm at the back despite some chances for La Viola to equalize. Roma had chances of their own however and as the game opened up, even more, they really should have finished the game off. They would eventually, as another bit of effective pressing from Nainggolan with the help of the substitute Gregoire Defrel led to Veretout surrendering possession and the Belgian played a perfect crossfield pass to another substitute, Diego Perotti, who clinched three points by making it 4-2 to Roma.

Fiorentina proved a stern test, but the win meant Roma now have won 12 consecutive away matches in Serie A, a record going back to last season under Spalletti. Veretout’s equalizer was actually the first goal Roma had conceded on their travels in the league this season which highlights how solid they have been under Di Francesco. Their strength in depth was highlighted by the performance of Gerson in attack which means Roma have him, Defrel and Florenzi as options for the right forward position besides El Shaarawy and Perotti for the left one. Also, there is Patrik Schick to come into this team, returning from injury. Lorenzo Pellegrini continued his strong start to his Roma first team career and his performances gives Di Francesco the option of rotating Kevin Strootman, Daniele De Rossi and Nainggolan when needed. All in all, Roma look really strong under their new coach and given Inter and Napoli’s results over the weekend they find themselves only five points off the top spot now with a game in hand. Exciting times in Rome ahead of the monumental derby against Lazio for the next round.

Lazio were not allowed to play this weekend though as their home game against Udinese was postponed due to heavy rain. Simone Inzaghi’s men will, therefore, go into the derby a point ahead of Roma with an equal amount of games played. It promises to be a spectacular clash.

Things are getting tighter at the top after Napoli surprisingly left the Bentegodi goalless against Chievo. They still remain unbeaten and have made a historic start with ten wins and two draws in twelve games. The lead over Juventus is only a point now.

Inter also remain unbeaten but that record went really close to ending after a spirited Torino came to the San Siro and took the lead after Iago Falque’s superb individual goal. Inter really struggled to construct their normally flowing attacks and had to wait until almost 80 minutes had been played before equalizing. Eder came off the bench to salvage the draw after a ridiculously brilliant assist from Mauro Icardi. It was heartbreak for Torino in a game of many familiar faces; Former Torino player Danilo D’Ambrosio started for Inter while former Inter players Nicolas Burdisso, Cristian Ansaldi, Joel Obi and Adem Ljajic started for Toro. Additionally, Toro coach Sinisa Mihajlovic was both a player and assistant coach at Inter in the past. Mihajlovic was very positive after the game, calling his side “almost complete.”

Milan got a vital win and are slowly getting results after a very tough fixture list finally starts easing up. Alessio Romagnoli opened the scoring away at Sassuolo with a header from close range and Suso scored the second in the second half with a stunning curler after some great individual play. Sassuolo remains hovering above the relegation zone but Christian Bucchi should remain safe in his job for at least another week.

SPAL built on last weekend’s win with a strong draw away at Atalanta. Luca Rizzo’s brilliant equalizer brought another valuable point for the newcomers while Atalanta understandably struggle to maintain the form of last year after player departures and their European commitments. Bryan Cristante had given them the lead but they still had to settle for a draw.

Marco Giampaolo is continuing to perform as one of the better coaches across Europe at Sampdoria who now look like stabilizing their position in sixth. They won the ever emotionally charged Derby della Lanterna against Genoa thanks to goals from Gaston Ramirez and Fabio Quagliarella. Giampaolo’s side is brilliantly coached both in attack and defense and inflicted misery on Genoa coach Ivan Juric who lost his job on Sunday. Juric departs with Genoa second-bottom in Serie A but they should be able to stay up if the Ballardini appointment works out, such is the quality in that squad.

Gerson wasn’t the only player with a doppietta this weekend. In Bologna, both Simone Verdi and Ante Budimir managed to score twice for their respective clubs as Crotone beat their hosts 3-2. Verdi opened the scoring with a beautiful free-kick with his left-foot but Budimir equalized. Verdi then scored another free-kick, this time with his right-foot! A Marcello Trotta penalty and a powerful drive from Budimir gave the Pitagorici the win. Two consecutive wins now for Crotone who are up to 15th place. Bologna are two points ahead in 12th.

Cagliari lifted themselves further away from trouble as Paolo Pancrazio Farago won the game against Hellas Verona with just five minutes to go. Hellas took the lead after just six minutes when Bruno Zuculini gave them the lead from Alessio Cerci’s delivery. Luca Ceppitelli equalized just before half-time until Farago won the game. Cagliari have turned things around after their managerial change with important results coming under Diego Lopez.

Benevento had lost each of their first eleven games. This weekend, they traveled to Turin to face Juventus. Surely that line of results wouldn’t change at the home of the reigning six-time champions? Benevento recently employed Roberto De Zerbi as their new coach and his tenure started in an almost incredible fashion. Amato Ciciretti’s free-kick gave Benevento a shocking lead at Allianz Stadium. Benevento then held onto their lead for almost forty minutes until Gonzalo Higuain showed why he’s such a superb finisher with a great left-footed shot. Juan Cuadrado then put Juve ahead with a header from Alex Sandro’s cross to give Juve the win and move to within a point of Napoli.

The Brazilian was given a rare start and responded with two well-taken goals and a strong overall performance as Roma won in Florence.

Nicola has led Crotone to two straight wins to move them to six points above the relegation zone. The wins have also come in two difficult games, at home against Fiorentina and away at Bologna. They came from behind to make it 1-1 and then from 2-1 down to win 3-2. That shows the mentality Nicola has instilled in his players.

The first of Verdi’s free-kicks. The left-footed one. Pure magic.