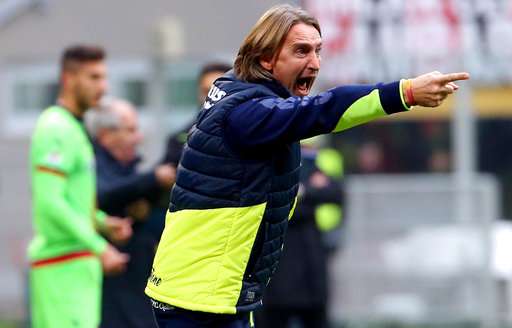 David Nicola has resigned as Crotone manager, the club has confirmed.

The club soon followed up his decision with an official announcement, stating:

“Football Club Crotone announces that Coach Davide Nicola today handed in his resignation as Coach of the first team. Along with the Piedmontese Coach, the following members of his staff have also resigned: assistant coach Manuel Garcia, athletic coach Gabriele Stoppino and technical collaborator Rossano Berti. The club thanks the Coach and his staff for their work, and wishes them well for the future on both a professional and human level.”

It was first claimed that a clash with the club hierarchy was the reason Nicola handed in his resignation. Following the announcement, club president Gianni Vrenna confirmed that Nicola decided to resign because he went into the locker room at half-time “to fire up the lads.”

“During the half-time break, I went into the locker room to fire up the lads and he maintains this intervention delegitimised him,” the 57-year-old said. “It’s not in my style, I’ve never intervened on the technical side, nor on how to deploy the team. I have considered as president who has the right and duty to intervene when things do not go, to go and give a spur to the team.” The incident occurred on Monday evening when Crotone lost to Udinese 3-0.

The Squali are currently on a four-match losing streak in all competitions but sit two points clear of the relegation zone.

Last season, Nicola miraculously led Crotone to Serie A survival, their first season in the top-flight, with six wins from their last nine matches that ensured a dramatic final day survival, sending down Empoli instead. In the process, the Squali created history by becoming the first side ever to avoid relegation after just gathering 9 points from the first half of the season.

Nicola then famously rode his bicycle on a 1,300 kilometer (800 mile) trip from Crotone to his hometown Turin – nearly the entire length of Italy.

The relegation battle|Who remains in Serie A next...