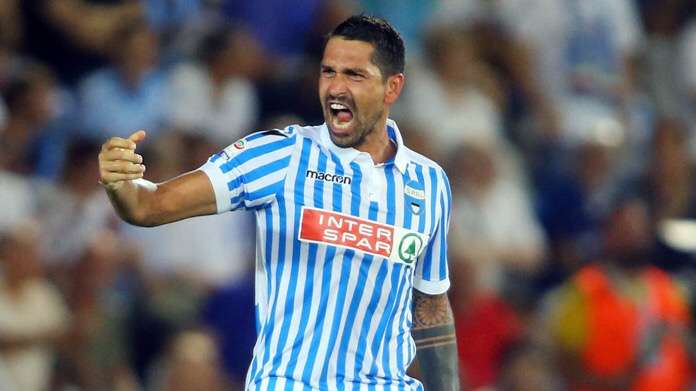 Italian football has seen it’s fair share of journeymen strikers who move from various clubs, delivering at some, while underwhelming at others. Alberto Gilardino, Christian Vieri, Marco Di Vaio and Sergio Floccari are just four that come to mind. If there were a gold standard for the profile of such a player, Lorenzo Amoruso, who’s record of scoring for 12 different Serie A clubs, would sit squarely on the throne. He shouldn’t get too comfortable though, as Marco Borriello tied his mark at the end of August when he scored his first league goal for new club SPAL.

Borriello was born in Napoli on 18 June 1982 and grew up in the notoriously tough San Giovanni a Teduccio neighborhood. Surprisingly, Napoli is one of the few clubs Borriello hasn’t represented. Borriello grew up with two brothers and his mother Margherita after his father, Vittorio, was killed when Marco was still only 10, by people with links to the Casalesi clan within the Camorra. At age 14, Borriello left Napoli and joined AC Milan’s youth academy.

Three years later however, Borriello signed for Treviso where he impressed in the reserves. He joined Triestina in Serie C2 for the second half of the 2000-01 season and managed to score his first senior goal as his solitary strike in nine matches. The following campaign back at Treviso would be a breakthrough of sorts, as the 19-year-old found the net ten times in 27 appearances in Serie C1, which led to Milan bringing the striker back to Milanello in the summer of 2002.

Upon his return to Milan, Borriello would compete with Andriy Shevchenko, Rivaldo, Filippo Inzaghi and Jon Dahl Thomasson for a place in the team. Needless to say, this was fierce competition for the 20-year-old striker without previous experience of even Serie B football. He managed six appearances in all competitions before spending the second half of the season at Empoli, as his parent club won the Champions League. Borriello returned to Milan for the 2003-04 campaign that culminated in the Rossoneri winning the Scudetto, but Borriello had only managed four appearances in the league and eleven in total throughout the season.

His minimal contribution to Milan led to a series of loans to smaller clubs in Italy. First he went to Reggina on loan for the 2004-05 season, before spending half the 2005-06 campaign at first Sampdoria, and then Treviso. His five goals at Treviso was the best goal scoring contribution he made during these three loans. Therefore, it was slightly baffling when Milan gave him another chance in 2006-07 when he made 14 appearances in total, as Milan again won the Champions League, with a sad and downtrodden Borriello in the stands. In that summer of 2007, Milan gave up on the striker and sold him to Genoa.

Upon his arrival at Genoa, Borriello was now 25 and had never scored more than five goals in a campaign, his initial breakthrough at Treviso aside. At Genoa, however, he was made the main man for the first time in his career as the club sought to survive in the top flight. Borriello thrived under Gian Piero Gasperini, as Genoa finished 10th and Borriello scored 19 goals in Serie A, finishing third in the goalscorers ranking behind Alessandro Del Piero and David Trezeguet.

All of a sudden, Borriello was a feared marksman across the country, especially in Udine, after two hat tricks against Udinese during the season. With such superb performances, Borriello was given his international debut for Italy and went to Euro 2008 but failed to make the pitch in the tournament itself. Interest in the striker was high and, after the sale of Alberto Gilardino, Milan came in for their former striker once more. Borriello was gearing up for a third spell at Milan.

Luck wasn’t on his side this time either, though, as his first season was spoiled by injury. The second proved much better, as Borriello made 29 appearances in the league and scored 14 goals. It seemed that if he was given the opportunity and trust to lead the team, he could duly deliver. Unfortunately for Borriello though, Milan had the chance to sign Zlatan Ibrahimovic in August 2010 and they rightly took it.

The Swede’s arrival meant Borriello was expendable and he left for Roma. His strong form continued in the capital and the striker made 34 Serie A appearances for the Giallorossi with 11 league goals swiftly following. In total, he scored 17 and was key for the capital club in attack. Once again, luck turned against the striker as a breakdown in relations with the new owners led to Borriello leaving the club on loan to join Juventus for the second half of the 2011-12 season, after failing to score in eight matches for Roma.

Juventus were in their first season under Antonio Conte and were competing for the Scudetto. Borriello became an effective squad member of the side and made 13 appearances under Conte and scored two goals. At the end of the season, Juventus were crowned champions and Borriello had won his first real trophy. Juventus decided not to sign the striker permanently and he returned to Roma only to be loaned out to Genoa for a second spell at the oldest club in Italy. 12 Serie A goals for the Grifone helped the club stay up and once again showed Borriello was capable of delivering when given the platform to do so. His return to Roma saw him receive rotational playing time under Rudi Garcia, but he failed to hit the target consistently and joined West Ham on loan, only to be injured instantly and failing to add to his two initial substitute appearances.

“I got on really well with Montella. Luis Enrique and Zeman had different footballing philosophies to mine, so I realised the time was right to leave. They were eventually sacked and I went on to win a Scudetto…”

-Borriello to LaGazzetta Dello Sport in 2013

Borriello failed to make any appearances for Roma in the first half of 2014-15 which led to a third spell at Genoa being finalised in January 2015. This time the move was permanent after the previous two, highly successful, loan spells. The third spell was a huge disappointment though, with no goals in eight appearances. By the summer, Borriello was on the move again. He spent the first half of 2015-16 at Carpi, scoring four goals in 12 matches before joining Atalanta for the second half, where he also scored four goals in 15 matches. As his career was slowly going downwards and his nomadic moving quite amusing, Borriello decided to leave Bergamo to move to Sardinia and Cagliari.

The 34-year-old arrived as the main man, and in the first official game of the season, a Coppa Italia clash with SPAL, Borriello scored four goals to announce his arrival on the island. A stunning season followed with 16 league goals from the veteran striker who thrived in Cagliari’s all-out-attack play in Massimo Rastelli’s 4-3-1-2. Cagliari finished securely in mid table and Borriello’s reputation was restored to previous heights. Was Sardinia possibly his home now? Knowing Borriello’s career by now, of course it wasn’t.

Instead he left and joined newcomers SPAL, whose 3-5-2 attracted Borriello. Borriello will be the focal point in attack as they battle for survival and if he can recapture the form he had at Cagliari, then SPAL’s chances of staying up will improve greatly. In his second game, Borriello scored his first goal for the club and led them to their first ever win in Serie A. Borriello says that, at his age, he needs to be excited by a new club prior to moving and fortunately for SPAL, they have been able to attract him. It will be intriguing to watch the 35-year-old striker’s quest to continue his hunt for goals.

-Borriello to LaGazzetta Dello Sport in 2013

A classic Italian prima punta, Borriello has thrived when surrounded with supplied creators who can provide him with the chances to pounce. His physical frame and prowess in the air has seen him unfairly described as only a target man when in reality his technical abilities make him very adept at linking the play with midfielders. His brilliant left-foot has been the source of most his goals, whether tap-ins, volleys or free-kicks. Eventually he will leave Italian football and Serie A will be down a character most of us recognise.

Of the twenty clubs in Serie A this season, Borriello has represented eight of them, albeit briefly on most occasions. Safe to say, he’s recognized across the country. He never managed to score for his country in the seven caps he earned. Had circumstances been kinder to him, Marco Borriello might have achieved more at the bigger clubs. For example, what if Ibrahimovic had never fallen out with Pep Guardiola? Then Borriello would have gone into another season at Milan as the main striker and perhaps been the catalyst behind their Scudetto of that season.

“I could have achieved more, but it wasn’t always my fault. Sometimes people put a spanner in the works. And every time I actually had a good season it was always followed by one blighted by injury.”

-Borriello, on unfortunate circumstances, to LaGazzetta Dello Sport in 2013

As I initially said, SPAL is the twelfth club Borriello has scored for in the Serie A after finding the net for Milan, Empoli, Reggina, Sampdoria, Treviso, Genoa, Roma, Juventus, Carpi, Atalanta, Cagliari and now, SPAL. Next summer, going by record, he will be looking for the thirteenth to make the record his own ahead of Amoruso. Where will that be? The romantic notion would be a return to his native Napoli, but that seems unlikely given their current style of play.

This piece originally appeared on the Running The Show.