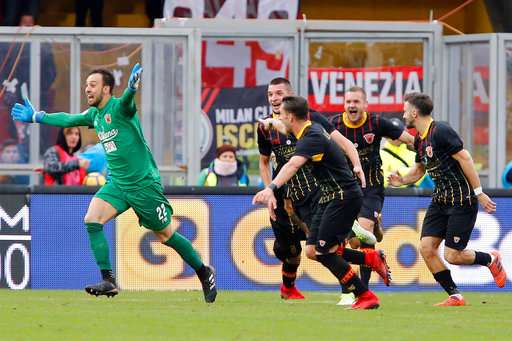 Juventus took the trip down to Napoli with the intention of inching closer to their title rivals at the top or at least maintain the distance that was four points prior to kick-off at San Paolo. They left just one point behind after a tactical masterclass from Massimiliano Allegri gave them a 1-0 win thanks to Gonzalo Higuain’s early strike.

Napoli came into the match as league leaders four points ahead of Juventus with Inter in between the two. Maurizio Sarri chose the following men to start the game:

Beforehand, many had anticipated a deep Juventus while Napoli dominated possession. They were surprised when Allegri’s men went out, dominated the ball and made Napoli chase them. Led by the peerless Miralem Pjanic in midfield, Juventus consistently played through Napoli’s normally tough pressing. With Napoli surprised at having to chase rather than make the opponent chase, Juventus took control of the game for the first 20 minutes. On one of the occasions when Napoli did attack, however, Juve won the ball and Douglas Costa dribbled through a few challenges before laying the ball off to Paulo Dybala. Dybala then ran 40 meters with the ball while Gonzalo Higuain frenetically tried to find a good position. He remained calm as Koulibaly moved centrally and stayed wider and Dybala then played a perfect pass to send his fellow Argentinian through on goal. In those situations, Higuain doesn’t miss. 1-0 Juventus. The pass or rather the delay of the pass until the exact correct moment highlighted the genius of Dybala and he crowned a good individual start to the game with that assist. Dybala had consistently dropped into midfield to help Juventus play out of Napoli’s press and progress the ball forward.

Allegri’s men had shocked Napoli by dominating possession early on, but after 20 minutes Napoli’s pressing started to become more successful and they forced plenty of turnovers when Chiellini, Matuidi and Khedira were allowed the ball rather than the Bosnian Pjanic who wouldn’t be stressed even if he were in possession of a piece of meat in a small cage with five lions surrounding him. The turnovers meant Napoli started to get the ball back and took initiative of possession as Juventus sunk deeper. Juve did, however, play their defensive style brilliantly and basically allowed Napoli the ball, but not in dangerous areas. Napoli struggled to move it between the lines as Pjanic and Khedira did sublime to cover the spaces in front of their defenders. Costa and Matuidi also impressed with their defensive contribution on either side of the midfield duo. Costa, in particular, was impressive as he was always an outlet and floated by his opponents when running with the ball.

In the second half, Napoli upped the pressure early on but Juve held firm and only allowed a few decent chances. Lorenzo Insigne got the best one when the substitute Piotr Zielinski sent him in behind the defense with a lofted pass that Insigne brought down and fired just outside the post from a hard angle. Jose Callejon then had a fierce shot stroking the post but otherwise, Gianluigi Buffon could deal with what Napoli threw at him quite comfortably. At the other end, Pepe Reina made a stunning save to keep out Matuidi’s volley after Pjanic had chipped the ball into the path of the Frenchman.

When the final whistle went, Sarri was fuming as he thought his side had dominated the game. Allegri said he was content with his side’s performance for nullifying Napoli at their home. Sarri was correct in that Napoli had overall dominated possession, but not in his statement that Napoli had dominated the game. This was a classic Juventus performance; score a goal and then defend as a unit and frustrate the opponent. Dries Mertens could tell you, he barely got a kick in the 90 minutes of football he played. Allegri once again won a tactical battle against one of his rivals and the way Juve changed from early domination to deep defending showed how complete this team is. That’s all the work from Allegri, one of the best coaches in the world who now really is in the race for a seventh successive Scudetto for Juve and a fourth in a row for himself. Next week, Luciano Spalletti’s Inter come to Turin. Sounds like that could be something to look forward to.

Roma continues to keep pace with the top three and easily dealt with SPAL at the Olimpico. Felipe’s early red card made it too easy for Roma, and goals from Edin Dzeko, Kevin Strootman and Lorenzo Pellegrini clinched the win. Federico Viviani did score a consolation penalty, but this was all Roma. They’re only five points behind Inter now and have a game in hand. Eusebio Di Francesco’s men are certainly in this title race.

Torino’s home game with Atalanta produced one of the technically worst halves of the season as both sides struggled to deal with the opposition’s man-marking. For large parts, the game became a battle between the two goalkeepers to see who had the better long kicks. Neither impressed. Toro took the lead when Nicolas N’Koulou headed Adem Ljajic’s corner into the net. Atalanta made a change at half-time, replacing Jasmin Kurtic with fellow Slovenian Josip Ilicic and he inspired a strong second half from Gian Piero Gasperini’s men. Ilicic scored a well-worked equalizer but Atalanta couldn’t find a winner despite dominating the second half. Andrea Belotti had Toro’s best chance of winning it but Etrit Berisha saved well.

Inter went top of the table on Sunday after dismantling Chievo at San Siro, 5-0. The Nerazzurri head into the Derby d’Italia against Juventus next weekend two points ahead of the Bianconeri and one ahead of Napoli. Ivan Perisic looks to be in great form after scoring a hattrick with Mauro Icardi and Milan Skriniar also on target. Inter were brilliant on the day and look full of confidence. Bring on Juve.

Lazio returned to winning ways after a strong comeback at Sampdoria. Marco Giampaolo’s men took the lead through Duvan Zapata but Sergej Milinkovic-Savic equalized and in stoppage time Felipe Caicedo found the winner. Lazio are therefore just on the outskirts of the title race in fifth, but if they win their game in hand they would move within four points of Inter. Simone Inzaghi’s men are still in the race. Wouldn’t it be exciting if both Roman clubs keep up the pace and win their games in hand to see the top five teams separated by only four points?

Bologna and Cagliari have both been doing well recently. When they faced each other, they played out a 1-1 draw in Bologna. Joao Pedro opened the scoring for the visitors but Mattia Destro leveled the score with ten minutes to go.

FINALLY! Benevento had lost fourteen games in a row before Milan came to town. It looked like it would be fifteen losses on the trot when Nikola Kalinic made it 2-1 to the Rossoneri after Giacomo Bonaventura and George Puscas had scored for either side. Alessio Romagnoli was then harshly sent off after making no contact with his opponent when he made a clumsy and needless challenge. In the 95th minute, Danilo Cataldi stepped up to take a free-kick on the left wing. He curled the ball into the box where the goalkeeper Alberto Brignoli met it with a diving header to put the ball into the bottom corner out of Gianluigi Donnarumma’s reach. Absolutely sensational.

Fiorentina followed last week’s impressive draw at Lazio with a strong 3-0 win at home against Sassuolo. Giovanni Simeone opened the scoring with a header in the first half and Jordan Veretout then made it 2-0 before the break. In the second half, Cyril Thereau made his second assist of the afternoon when playing Federico Chiesa through and the youngster made no mistake. Tough start for new Sassuolo coach Beppe Iachini.

Goran Pandev scored the only goal of the game at the Bentegodi to give Genoa a vital win against relegation rivals Hellas Verona. The Macedonian struck with his right foot in first-half stoppage time to give Davide Ballardini another win. His start at Genoa has been superb. Hellas continue to struggle.

When Massimo Oddo was sacked as Pescara coach in February he had failed to guide his side to a single win in Serie A after overseeing their promotion from Serie B. He lost his first game as Udinese coach against Napoli last week, but on Monday night, Oddo finally tasted victory as a Serie A coach. His Udine traveled to Crotone and won 3-0 after two goals from Jakub Jankto and one from Kevin Lasagna.

The Croatian scored three against Chievo to send Inter top of the table and once again demonstrate how lucky Inter are for keeping him out of Manchester United’s clutches.

Inzaghi’s men lost the Rome derby and then conceded a 94th-minute penalty to drop two points against Fiorentina. They now faced one of the toughest tests in Italy when traveling to Sampdoria where the Blucerchiati had a 100% home record. They had to fight for it, but Lazio left with three points. Inzaghi has done well to lift his players and they are in the title mix.

There could only be one winner. Your team hasn’t taken a single point all season. You’re a goalkeeper. You have a free-kick in the 95th minute. You score a diving header. Against Milan. It’s an insane story.