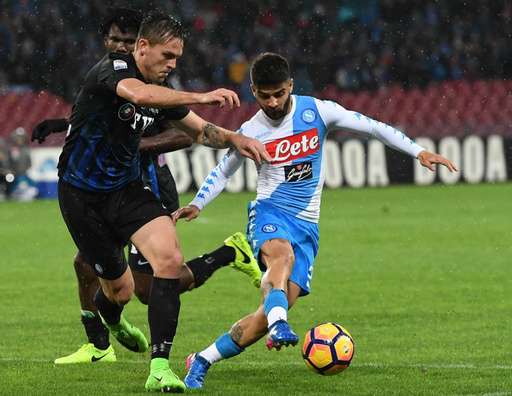 Maurizio Sarri’s side travels to Atalanta in hopes of maintaining their lead at the top of Serie A in the early Sunday morning kick-off at the Stadio Atleti Azzurri d’Italia.

Gil Azzurri have taken Serie A by storm this season and currently lead Juventus by a point, but they’re coming up against an Atalanta side on Sunday who recently knocked them out of the Coppa Italia as they defeated Napoli 2-1 at the Stadio San Paolo.

Napoli have won their last five games in Serie A, though and have been a real force this season going forward and defensively sound. During their 20 games so far this season, they have found the net on a total of 44 times, as well as conceding on just the 13 occasions.

Gian Piero Gasperini’s side will certainly head into Sunday’s game in a confident groove knowing that they can beat the Serie A leaders, and Napoli will have to be wary not to make the same mistakes they did a few weeks ago as they exited the Italian Cup at the quarter-final phase.

Atalanta are currently seventh in the Serie A table, but they have once again proven this season that they can beat the best – they followed up their Coppa Italia success with a win over Roma last time out, despite being reduced to 10-men for the entire second-half after former Middlesbrough man Marten De Roon was dismissed.

It is set to be a fascinating contest on Sunday, with Atalanta hoping to back-up their fine victory over Roma, and the visitors will be keen for revenge following their recent loss to Le Dea and they will hope to ensure they remain at the top of the pile come the end of the weekend in Serie A.

Mertens has been on fire for the Partenopei this season, and if he can keep up this type of form throughout the season, then Napoli will have a great shot of winning the Serie A. The 30 year-old Belgian has 10 goals and six assists in 20 Serie A appearances this season, and his influence has certainly helped the club to the top of the table.

Atalanta will need to be wary of his presence and need to make sure not to give him an inch of space, because if they do, the Belgian has the class and quality to punish any side.

The Slovenian has been in fine form this season for Atalanta, and has been key in the success of Gasperini’s side this season. The 29 year-old has seven goals and five assists in 19 Serie A appearances, and was an influential figure as they surprisingly beat Roma 2-1 last time out.

The attacking midfielder will definitely need be a threat to the Napoli back-line in the Sunday morning kick-off, and they will have to be sure to keep close tabs on the Slovenian playmaker, who also scored recently before Christmas as Atalanta defeated AC Milan 2-0 at the San Siro.

Gasperini took over at Atalanta in 2016 and has been key in taking the club to a whole new level. In his first season with the club, he helped them finish fourth and due to this they qualified for the UEFA Europa League, and they continue to be a force to be reckoned with this season by continuing to define the odds by upsetting the big guns of Serie A – since his arrival, Gasperini has overseen 37 victories during his 69 games in charge, and has an impressive winning record of 53.62% and he will hope to cause another upset in charge at home against Napoli tomorrow morning.

Sarri appears to have it figured out this season, and his side finally look like they could be genuine title contenders to Juventus. They’re top of Serie A, after all. Their free flowing football with the likes of Marek Hamsik, Lorenzo Insigne and Dries Mertens has put them in tremendous stead going forward this season, and some of their football, at times, has been sensational to watch.

Not only that, they have become more stable at the back this season, with Kalidou Koulibaly and Raul Albiol forming a formidable partnership defensively for the Naples-based outfit and this is mainly down to the influence of Sarri, who is keen for his side to defend as a unit and when attacking, they build from the back and have a real fluidity about their play.

They’re an impressive squad, make no mistake about that and since he joined the club in June 2015, the 59 year-old has an astonishing record of winning 85 of his 128 games in charge, leaving him with a current win percentage of 66.41% and he will be keen to add to that against Atalanta on Sunday.

Atalanta have no injuries to report and should have a fully fit squad for their Sunday morning matchup against the league leaders – former Kobenhavn striker Andeas Cornelius could lead the line once again for Le Dea after he scored in their shock 2-1 away victory at Roma last time out.

Milik could make a return to the Napoli squad following a lengthy lay-off with a knee injury. Marek Hamsik (flu) could face a late fitness test – full-back Faouzi Gholam (cruciate ligament) remains a long-term absentee for the league leaders.