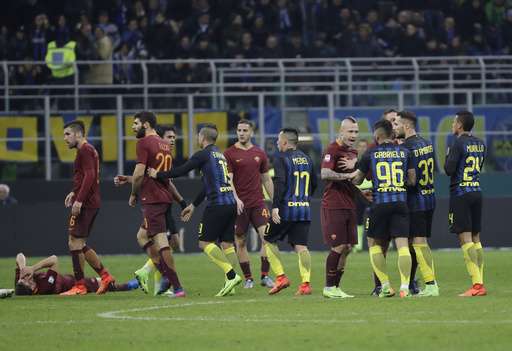 Inter Milan host Roma as third faces-off against fifth at the San Siro in what should be a fascinating encounter on Sunday evening.

Inter started the season in blistering fashion, and it looked at one point like they would be the ones to challenge Napoli for the Serie A title but they have dropped off the face in recent weeks after failing to win in their last five league matches.

The last time Inter won was when they thrashed Chievo Verona 5-0 at the San Siro in early December, so they will be hoping to get back on track this season – Luciano Spalletti’s side are currently nine points adrift of leaders Napoli.

The hosts certainly have the players at their disposal to mount a serious title challenge, but due to their current form, that now looks unlikely. Controversial striker Mauro Icardi has flourished once again this season scoring 18 goals in 20 league appearances, and also has a solo assist to his name and has once again shown that he is one of the best strikers in Europe.

Due to his impressive form, it means that the likes of Real Madrid have been sniffing around the Argentine forward, but Spalletti will be keen to keep hold of his star man as Inter look to secure a Champions League place this season.

Ivan Perisic, who was linked with a move to Old Trafford could also help to revitalise Inter Milan’s season against Roma at the San Siro tomorrow evening – the Croatian playmaker has also been in sublime form this season, scoring on seven occasions, as well as chipping in with six assists and he has created a formidable partnership with Icardi which make the Nerazzurri’s attack a force to be reckoned with.

Roma, on the other hand, have endured a topsy-turvy season so far in Serie A, having picked up just one point from a possible nine out of their last three outings, which has left them fifth in the league table. They’re also currently 12 points off league leaders Napoli.

Last time out, they lost 2-1 at home to ten-man Atalanta and Eusebio De Francesco will be looking for a response from his side when travelling to the San Siro on Sunday evening.

However, the last time these two sides met at the Stadio Olimpico, it was Inter Milan who prevailed against the Giallorossi, as they won 3-1 with a double from Mauro Icardi and a goal from Matias Vecino securing the points for Spalletti’s side, despite Edin Dzeko handing Roma the lead.

Roma certainly have players who can punish Inter at the San Siro on Sunday evening, but it is vitally important that they utilize the likes of Stephan El Shaarawy and Dzeko if they’re to come away with anything on what could well turn out to be an entertaining affair.

Dzeko, in particular, is a player with real quality and if given an inch, he can punish you. Lately, he has been linked with a move to Stamford Bridge, however, he could provide to be a stern test for Milan Skriniar at the back.

So far this season, Dzeko has scored a total of nine times in 19 league encounters, including three assists as well.

With both teams having ambitions for the Champions League, whoever wins this could gain momentum, with Roma clearly needing the three points more being two spots below Inter Milan in the Serie A table.

Spalletti, who has had two separate spells at Roma, will be keen to get one over on his former club and they could do the double over the capital club, having already beaten them 3-1 at the Stadio Olimpico earlier in the season.

The Inter boss led Roma to a second place finish in Serie A last year, and also had a four-year stint with the Giallorossi between 2005 and 2009, before taking over from Stefano Pioli this season. His Inter side have looked good under his guidance so far this season, despite dropping off the pace in Serie A in recent weeks.

Since he took over at the San Siro at the start of the season, he has obtained a win percentage of 54.55%, having won 12 of his 22 games in charge, as well as witnessing seven draws and three losses.

Di Francesco is 10 years younger than Spalletti and has already shown glimpses of how good a manager he can be. In his five years in charge at Sassuolo, Di Francesco earned promotion to Serie A and also achieved a Europa Leauge berth.

At Roma, he has adopted a playing style which is attractive to watch – Roma are difficult outfit to play against this season, and his record speaks for itself, having won 15 of his 26 games in charge, and he will be eager to improve on his current win percentage of 57.69%, with Roma currently fifth in the Serie A table.