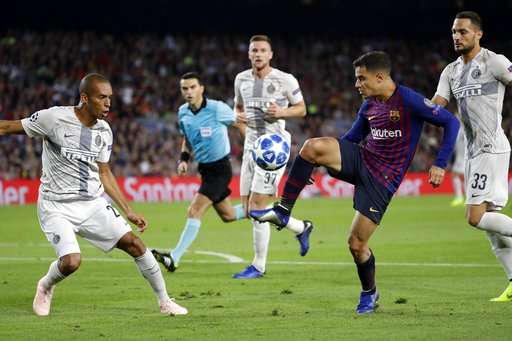 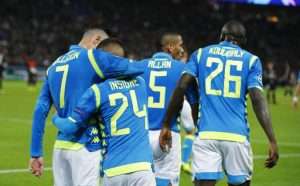 Insigne celebrates with his teammates after scoring the opening goal

The battle for a top two spot recommenced on Wednesday night in the most intriguing group of the Champions League this year. PSG hosted the group pacesetters, Napoli, in a mouth-watering clash at the Stade de France. Just one point separated the top three sides going into this game, so there was much to play for.

Napoli have enjoyed a strong start to the season, winning seven of their first nine league matches, and they were on top early on here. The first big chance fell to the Italian side, with Dries Mertens finding space in the box to meet a cross from the left, but his cushioned effort crashed back off the underside of the bar. This was a warning sign for PSG, one they did not heed. This time, the chance was manufactured from the right, with Jose Callejon clipping a ball in behind for Lorenzo Insigne to run onto. The striker made no mistake, lifting the ball over the advancing Alphonse Areola to put the visitors in front.

PSG needed to gain a foothold, and they showed signs of life before the break. Kylian Mbappe squandered the best opportunity, as he was found by Neymar but fired his shot straight at David Ospina. Napoli were starting to come under pressure though, so it was no surprise to see PSG level matters just after the hour mark. Patient build-up play created an overlap on the right, leaving Thomas Meunier to put a dangerous cross into the box which Marco Rui could only succeed in turning into his own net.

The momentum was now with PSG, yet Napoli still carried a threat themselves. As the game ticked into the final fifteen minutes, they silenced the Parisian crowd once more. Mertens pounced on a loose ball in the box following a blocked long-range strike, steering the ball into the near corner. Carlo Ancelotti’s team were closing in on a huge three points but were denied at the death. In the third of five additional minutes, Angel Di Maria found space on the edge of the area and produced a stunning curled finish to make it 2-2 and keep PSG’s Champions League dreams alive.

Liverpool now top the group at the midway stage on 6 points, with Napoli on 5 and PSG a further point back. The latter two sides meet again in Naples in just under a fortnight, with the hopes of progressing into the last 16 still firmly in the balance. 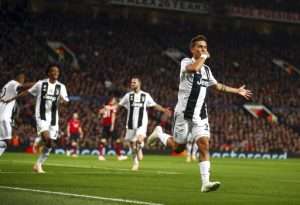 Juventus laid down a marker on Tuesday night, beating Manchester United 1-0 to show why they are considered one of the top contenders for the Champions League this season. Massimiliano Allegri’s side were always in full control, with Miralem Pjanic and Rodrigo Bentancur running the show in the middle of the park. Paulo Dybala’s close-range finish was enough to secure the three points, whilst Cristiano Ronaldo was denied a goal on his return to Old Trafford by a fine David de Gea save. Juventus have maximum points from their three games and can confirm top spot with another victory over United in early November.

Roma eased past CSKA Moscow 3-0, in a result that puts them in pole position to progress out of the group. Edin Dzeko scored a first-half brace, with Cengiz Under putting the game to bed in the early stages of the second half. Last season’s semi-finalists are now second in the group, level on points with Real Madrid, whilst holding a two-point advantage over CSKA Moscow.

Inter Milan saw their seven-match winning streak snapped, losing out 2-0 to Barcelona, despite the absence of Lionel Messi due to a fractured arm. Rafinha, who spent the second half of last season on loan at Inter, handed the Spanish side the lead, and Jordi Alba rounded off the scoring late on. Inter remain in a strong position to qualify though, thanks to PSV and Tottenham playing out a 2-2 draw earlier in the evening. With three games to go, Inter hold a five-point advantage over third and fourth place. 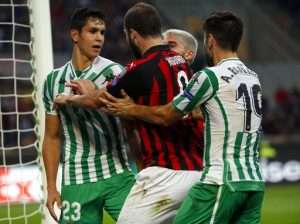 Pressure is mounting on Gennaro Gattuso, as his Milan side lost 2-1 at home to Real Betis in the Europa League. The hosts were woefully off the pace in the first half, and were fortunate to only trail by a single goal scored by Antonio Sanabria, at halftime. Giovani Lo Celso extended Betis’s lead after the break with a wonderful finish from outside the box. Substitute Patrick Cutrone gave Milan a lifeline with seven minutes remaining, but in truth, Betis were comfortably the better side and held on for a deserved win. Samu Castillejo compounded Milan’s misery by receiving a straight red card in stoppage time in a week that Milan will want to forget following Sunday’s derby defeat to Inter.

Meanwhile, Lazio took a giant step towards the last 32, seeing off Marseille 3-1. Wallace headed home from a corner to give his side the perfect start, and Lazio continued to control proceedings for long periods. Felipe Caicedo looked to have put the result beyond doubt when he made it 2-0, only to see Dimitri Payet clip home a delightful free-kick to reduce the arrears. This set up a tense finish, yet Lazio kept their composure and sealed victory in the final minute with a well-taken Adam Marusic goal. Lazio have a five-point cushion between themselves and the bottom two sides, Marseille and Apollon Limassol, meaning a win in the return game against Marseille will likely see them wrap up qualification.