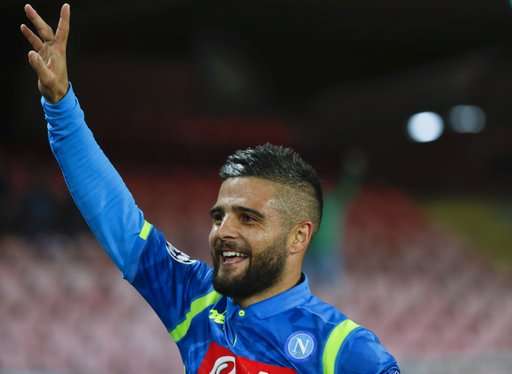 Napoli bounced back from their weekend loss to Juventus, as they handed Liverpool a second defeat in the space of a week. With PSG thumping Crvena Zvezda 6-1 in the early-kick-off, the pressure was on Napoli to respond with a big performance. They did just that.

Despite going out of the Carabao Cup last week, Liverpool have impressed so far this season, dropping just two points in the league. They edged out PSG in their opening group game, leading many to consider them the favourites coming into this clash. However, it was Napoli who were on top from the off, with Lorenzo Insigne seeing his effort drift narrowly wide early on, although replays showed that playing the ball across goal to Jose Callejon may have been the better option. Liverpool’s cause was not helped by a sudden injury to Naby Keita. The creative midfielder went down off the ball in the centre-circle, and had to be stretchered off soon after. The visitors continued to be off the pace after this break in play, as Napoli manufactured more chances. Arkaduisz Milik had the best opportunity, but his shot on the turn was straight at Alisson, who was making his first appearance back in Italy following his summer move from Roma.

Very little changed as the teams re-emerged for the second half. Again, it was Napoli who were pushing forwards, with Milik forcing Alisson into a sharp stop low down to his left. Sensing that the game was within Napoli’s grasp, Carlo Ancelotti sent on Dries Mertens and Simone Verdi to find the goal that had thus far alluded his team. Mertens was inches away from making the desired impact, but his volley from Marco Rui’s pinpoint cross thudded against the bar and stayed out. It appeared that Napoli’s moment may have been and gone, but they refused to settle for a point and got their deserved winner in the final minute of normal time. Callejon found space down the right side and squared the ball perfectly into the path of Insigne, who slid in at the back post to seal a crucial victory.

The importance of that goal was evident at the final whistle. Napoli have surged to the top of the group, and will now approach their double-header with PSG in confidence, believing that they have the ability to progress to the latter stages of Europe’s elite competition.

Inter edge out Eindhoven, Juventus and Roma ease to victory

Inter Milan made it two wins in as many games in Europe, battling back to beat PSV Eindhoven 2-1. The Dutch side went ahead just before the half-hour mark thanks to a fine strike from Pablo Rosario, and Inter were a little fortunate to see Samir Handanovic only receive a yellow card for handling the ball outside of his area. Having ridden their luck, Inter levelled through Radja Nainggolan’s measured volley just before the interval. The winner arrived in familiar circumstances. Mauro Icardi pounced on a defensive mix-up to round the goalkeeper and slot into the empty net; a typical opportunistic goal from the Argentine. Inter are now level on points at the top of the group with Barcelona and face the Spanish champions after the international break.

Paulo Dybala inspired Juventus to a resounding 3-0 win over Young Boys on Tuesday evening. The playmaker is showing signs of a return to form after a frustrating summer which saw him used sparingly at the World Cup and then in the opening fixtures of the season. Dybala was involved from the outset, scoring all three of his side’s goals. The pick of the bunch was his first, as he latched onto a sublime ball over the top from Leonardo Bonucci and volleyed home without breaking stride. The other match in the group between Manchester United and Valencia ended in a stalemate, meaning that Juventus are out in front on their own in the group with maximum points.

Not to be outdone, Roma delivered a devastating display of their own, crushing Viktoria Plzen, 5-0. Edin Dzeko netted a hat-trick, whilst Justin Kluivert, son of the legendary Patrick, scored his first goal for the club. Roma sit third in the group. They next face CSKA Moscow, who produced a major shock, seeing off defending champions, Real Madrid, 1-0.

Patrick Cutrone lived up to his tag of ‘super-sub’ as he came off the bench to score twice in a 3-1 win for Milan over Olympiacos. Milan fell behind to a Miguel Angel Guerrero header but bounced back in spectacular fashion. Gennaro Gattuso introduced Cutrone and Hakan Calhanoglu shortly after the break, a move that paid dividends as Cutrone made it 1-1, before Calhanoglu provided the assists for Milan’s second and third goals, finished off by Gonzalo Higuain and Cutrone once more. Six points out of six for Milan, who sit atop Group F.

Lazio had a night to forget in Frankfurt, going down 4-1 and ending the game with nine men. Marco Parolo cancelled out Danny da Costa’s opener, but Lazio were only level for five minutes, as Filip Kostic restored Eintracht Frankfurt’s advantage. The deficit was still retrievable at this point, yet by the hour mark, this was no longer the case. Dusan Basta was given his marching orders in first-half stoppage time for pulling back an opponent to prevent a counter-attack, and after Luka Jovic’s delightful chip had extended Frankfurt’s lead, Joaquin Correa was shown a straight red for a wild lunge from behind. There was no way back for the Italian side; their misery was complete in injury time with da Costa adding a fourth. Simone Inzaghi’s men head to Marseille in late October with their hopes of qualification in the balance.