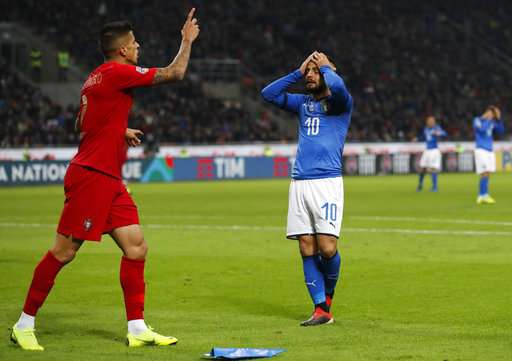 In a performance that lacked the finishing touch, Italy was held to a goalless draw against Portugal at the San Siro. The result cements a 2nd place group finish for the Azzurri, with Portugal securing a spot in the UEFA Nations League Final. Had the Italians won, they still would have needed last place Poland to draw or win against Portugal in the final match of Group 3 in order to move on.

Knowing they only needed a draw, Portugal set up for it, playing much of the match with ten men behind the ball and breaking out for the rare counter-attack. With a packed San Siro and lively atmosphere, the Azzurri were full of energy in the first half, dominating possession and creating decent chances. Perhaps the best chance came in the fifth minute when Lorenzo Insigne rifled a shot from outside the box, resulting in Portugal keeper Rui Patricio’s best save of the match. Unsurprisingly, Ciro Immobile made a hash of the rebound, sending it over the bar.

Despite managing 69% possession and 15 shots over 90 minutes, chances only went downhill after the lively early minutes, as the Azzurri only hit three shots on target. Waiting for the first half break-through, fans should have expected a goal come the second half had the level of play continued. Instead, Italy looked fatigued and sloppy as Portugal continued to press higher up the pitch.

Azzurri boss Roberto Mancini said post-match that “the decline in the second half was due to us getting tired physically.” However, the manager waited until the 74th, 81st, and 87th to make his three substitutions. The Portuguese were well organized, deserving the draw after Mancini failed to make tactical changes and Italy continued to try the same-old.

As the play by the Italians died in the second half, so did the energy of the fans. Performances by both entities deserved each other. Despite showing a force 73,000 strong, fans decided to use their energy for purposes other than lifting the team.

Right from the start, the Milanese fans whistled through the entirety of the Portuguese national anthem. These same antics saw Azzurri legend Daniele de Rossi apologize on the Sweden team bus following the crushing draw at the San Siro in November of 2017, which saw Italy eliminated from World Cup qualifying. Italian fans are some of the most passionate in the world when it comes to their own anthem and some of the most disrespectful towards others.

The disrespect continued as fans hurled homophobic chants at Rui Patricio every time the keeper was given a goal kick. Similar chants saw Mexico and several other nations disciplined by FIFA during the World Cup. It would be unjustified if the Italian Federation is not reprimanded similarly. Patricio finally received his deserved yellow card for time wasting late in the second half, but the player was not deserved of these slurs.

Finally, fans spent more time in the first half booing defender Leonardo Bonucci than cheering on the team. Perhaps warranted and unsurprising given the venue and Bonucci’s short history with AC Milan, the fans only settled after Bonucci’s narrow miss off a headed ball from an Insigne freekick. Bonucci responded post-match saying, “I have the confidence of the manager and my teammates and that’s what matters.”

The squad did not give the fans a performance worthy of cheering in the second half, and the fans subsequently did not try to lift them. Although the national team remains unbeaten in over 40 matches at the San Siro, fans will have went home expecting more from this one. Italy has now only scored 11 goals in their last 16 matches, and have failed to score more than one goal in a competitive game since beating Liechtenstein back in June 2017.

Despite all of the negative, there was still plenty of positive to take away from the match. Being integral to nearly every chance, Marco Verratti had one of his best games for the Azzurri. Playing the ball at his feet plenty, the youngster Gigio Donnarumma looked confident and made a great save on one of Portugal’s only chances. The back four were sturdy, and the ball moved through the midfield well during the first half.

Moving forward, service into the frontline needs to better and the attacking three need to make better runs. Chiesa was lackluster during this one and Insigne could simply not be found. The patience for Immobile to replicate his Serie A success has run thin, and Mancini should try to look elsewhere, despite limited options.

Even though the team moved the ball well through the midfield, they lacked the incisive final pass and overall finishing was poor. Verratti and Jorginho were marked better in the second half, which seemed to tire Verratti and forced the back four to play balls over the top without success. The Azzurri must find better ways to move the ball as they found it nearly impossible to get behind the back line.

Overall, the first half of play was some of the best under Mancini, even without scoring a goal. However, the second half was uninspiring and far too reminiscent of recent failures. This draw against Portugal should be a learning moment for Gli Azzurri, who desperately need to find ways to score. If Mancini can find a way to add that missing piece of attacking play, which he insists he will, the Italians will be a force to be reckoned with. Tuesday’s friendly against the United States could be Italy’s opportunity to finally turn the corner. If not, patience with Mancini may begin to wear thin.