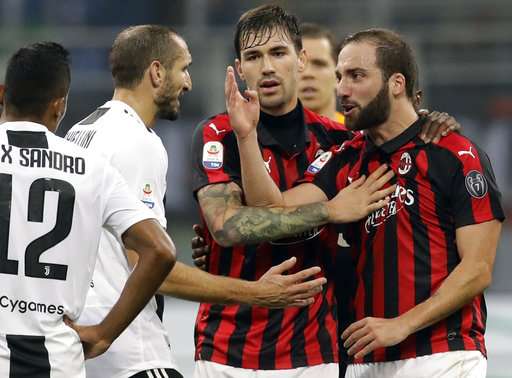 Gonzalo Higuain missed a penalty and was shown a red card on Sunday night, as his former club, Juventus, eased to a 2-0 victory at the San Siro. Facing his ex-teammates for the first time since his summer move, Higuain was desperate to make a point. It turned into a nightmare evening for the Argentine.

Juventus came into the game off the back of their first defeat of the season in midweek against Manchester United. They quickly settled into this match though, taking the lead through the returning Mario Mandzukic, who leapt highest at the back post to nod home an Alex Sandro cross.

Milan struggled to create much but were handed a golden opportunity just before halftime. Mehdi Benatia was adjudged to have handled inside the area, following consultation with VAR, leaving Higuain with the chance to level the game from the spot. Yet the striker could not take advantage, as his penalty was turned onto the post by Wojciech Szczesny. Already a sign that this was not to be Higuain’s night.

The champions were comfortable during the second half, as Milan were unable to trouble Szczesny at all. As the game ticked into the final ten minutes, Juventus put the result beyond doubt. The home side failed to clear their lines, and Gianluigi Donnarumma could only parry Joao Cancelo’s cross out to Cristiano Ronaldo, who made no mistake in volleying home into the unguarded net.

The highlight of the evening was still to come. Having been penalised for a foul just inside the Milan half, Higuain lost control and furiously remonstrated with the referee. He was initially booked for his protests, but a second yellow card swiftly followed as he continued to challenge the referee’s decision. Higuain left the pitch in tears, with members of the Juventus side trying and failing to console him.

Milan have now slipped out of the top four, but Juventus’s title charge remains on course, heading into the November international break with a six points lead.

Inter Milan were handed a crushing loss in the Sunday lunchtime kickoff, as they were beaten 4-1 by Atalanta, bringing an end to seven-match match winning streak in the league. Hans Hateboer put Atalanta ahead, only to see Inter give themselves a lifeline when Mauro Icardi levelled from the spot two minutes into the second half. Atalanta responded impressively though, with goals from Gianluca Mancini, Berat Djimsiti and Alejandro Gomez wrapping up a deserved win. Marcelo Brozovic was sent off in injury time to sum up a bitterly disappointing afternoon for Inter.

Roma inflicted a 4-1 defeat on Sampdoria, making it three straight losses for the Genoa-based club. Roma opened up a three goal lead through Juan Jesus, Patrick Schick and Stephan El Shaarawy. Gregoire Defrel pulled one back against his former club, before El Shaarawy put the finishing touches on the result in stoppage time.

Napoli leapfrogged Inter into second, coming from behind to see off Genoa 2-1 in a rainstorm at the Ferraris. Christian Kouame gave Genoa a surprise lead, but Carlo Ancelotti’s men hit back after the break, levelling through Fabian Ruiz. The comeback was complete when Davide Biraschi turned into his own net with just four minutes remaining.

Four and no more for Ventura, pressure grows on Velazquez

Gian Piero Ventura offered his resignation after just four matches in charge of Chievo, who drew 2-2 at home to Bologna on Sunday afternoon. The former Italy manager has struggled to turn things around in Verona, and despite picking up his first point, it seems that his time in charge is up. His side battled back from an early deficit this weekend, with Riccardo Meggiorini and Joel Obi giving Chievo a 2-1 half time lead. Riccardo Orsolini restored parity after the break to deny the hosts a rare victory, and leave them searching for their third manager of the season.

Julio Velazquez is on the brink as well, after his Udinese side lost to Empoli 2-1. Miha Zajc and Francesco Caputo gave Empoli a 2-0 lead, with Ignacio Pussetto’s second half strike proving to be a mere consolation. Udinese have only won twice this campaign, which sees them sitting outside the relegation zone only due to goal difference. Velazquez’s fate may be confirmed in the coming days.

Lazio edged into the top four, but had to settle for a 1-1 draw away at Sassuolo. Both goals arrived in the first fifteen minutes, as Marco Parolo’s goal was cancelled out by Gian Marco Ferrari.

Parma halted a run of three games without a win, beating Torino 2-1 in Turin. The damage was done in the opening half hour. Gervinho and Roberto Inglese netted for the visitors, who successfully withstood second half pressure after Daniele Baselli had halved the deficit shortly before half time.

Frosinone continued their recent upturn in form, striking late to earn a 1-1 draw with Fiorentina. Marco Benassi looked to have given Fiorentina all three points, only for Andrea Pinamonti to come off the bench and equalise with time running out. Having been well adrift just a few weeks ago, Frosinone are now just two points from safety.

Cagliari produced a fine comeback on Saturday evening, claiming a 2-2 draw against SPAL after being two goals down. SPAL appeared set for a comfortable win, with strikers Andrea Petagna and Mirco Antenucci finding the target. Cagliari replied with two goals in three minutes though, Leonardo Pavoletti and Artur Ionita securing a hard-fought point.