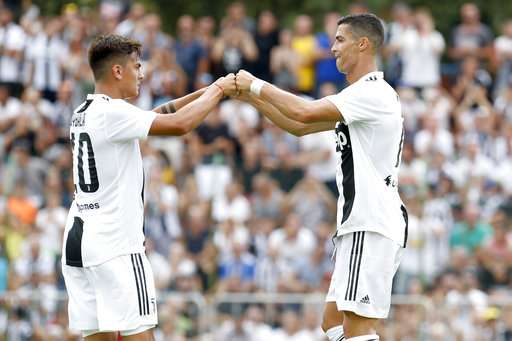 Possibly the toughest scudetto win for Juventus was achieved last season as they rose to seal their seventh consecutive Serie A title. Making it their 34th league title, they finished at the top with 95 points. Finishing just four points clear of Napoli, who placed in second with 91 points, both sides topped the league with a separation of more than 20 points from the rest of the table. The Italian giants found themselves struggling near the end, doing their best to top Napoli in the hunt for another league title. And if it wasn’t already hard enough for them, the Bianconeri had continued their race for the elusive Champions League trophy.

Knocking out Tottenham and making their way to play Real Madrid in the quarterfinals, they found themselves going face to face with their nightmare. Juventus is a team of mental fortitude, courage, and determination. While fighting for their seventh consecutive league title, they aimed to finally beat out Real Madrid and capture their Champions League dream. Unfortunately, after losing 3-0 at home to Real Madrid, the 3-0 lead at the Santiago Bernabeu just wasn’t enough as the 90+ minute penalty was awarded. It was none other than Cristiano Ronaldo who sealed the fate of Los Blancos, eventually crowning them with yet another Champions League title.

The 2017/18 season was definitely put to the test, but Juventus remained calm as they knew they could overcome their obstacles for another league victory. Manager Massimiliano Allegri has been the key, maintaining a perfect run of title defenses with the black and white ever since he took over the club. While facing the challenges and pressures the season brought along, he understood what Juventus needed to do. “The greatest merit of the (Juventus) team was that they were always able to keep their calm because in football things can change in a second,” said Allegri. Having brought along key signings such as Federico Bernardeschi, Blaise Matuidi, Mattia De Sciglio, Douglas Costa and Wojciech Szczesny, they also made permanent Medhi Benatia and Juan Cuadrado. These players seemed to be exactly what Juventus needed.

After the loss of Leonardo Bonucci, the club was able to cope well and allow for a new partnership as Chiellini and Benatia were an unstoppable force, allowing only 24 goals all season long. They were a force to be reckoned with, making few mistakes. Also, with special recognition comes Douglas Costa. The 27-year-old had a slow start, taking a while to adapt to the game of Italian football, but came to the surface as he ended with a total of 14 assists and seven goals. Allegri had taken accustom to Costa and his playing style, helping make the game his own. Costa likewise had taken accustom to Allegri, saying “he is a good coach with a great passion for the defensive part, and in my playing style. He was very important for me because I’m a player who loves to attack. He made me a more complete player.”

The depth of Juventus has always been crucial and key to their success. With players such as Szczesny backing up Gianluigi Buffon, they had no problem setting and keeping the pace. This was an obvious downside for sides like Napoli as they struggled to maintain themselves. While pushing Juventus to the last step in the season, fatigue was shown as Lorenzo Insigne, Jose Callejon, and Dries Mertens started almost every single match. It also hurt them as Milik, Allan, and Hamsik suffered injuries. Nonetheless, Juventus had proven themselves as they were able to step on top of their opponents with the strength and determination that had overlapped their challengers.

The upcoming season for Juventus is rather menacing. Not only does the Old Lady carry a well-collected midfield, but also a rock-solid defence, and many attacking options supporting Cristiano Ronaldo. In the midfield, they have captured new signing Emre Can on a free transfer from Liverpool. A partnership consisting of Miralem Pjanić and Emre Can will be a nice balance considering the German’s defensive characteristics. Not to mention the likes of Rodrigo Bentancur, Blaise Matiuidi, and Sami Khedira, who all should get decent time in Allegri’s rotation.

Pushing back into the defence the options are rather spectacular. The famous backline trio is back together again as Juventus have managed to sign Leonardo Bonucci back, sending Mattia Caldara to AC Milan. The Bianconeri have also brought in Joao Cancelo, and back from loan comes Leonardo Spinazzola, both incredibly talented and young. The depth in the backline of Juventus is immaculate and clean. As the middle is home to Chiellini, Bonucci, Barzagli, Benatia, and Rugani; the outsides consist of Sandro, Spinazzola, De Sciglio, and Cancelo. The playmaking from Bonucci and Cancelo on the backline will allow for an attacking force all around. Combining that with the defensive help of Emre Can and Matuidi in the midfield, they really have completed what fans hope to be a Champions League winning defence.

The exciting part for just about everyone is definitely the attack of Juventus this season. Signing Cristiano Ronaldo alone sparks heavy conversation for the attack of the Italian giants. The 33-year-old has been the top scorer of the Champions League for six seasons running. Alongside him, will be Paulo Dybala, Mario Mandzukic, Douglas Costa, Federico Bernardeschi, and Juan Cuadrado. Having Cristiano in the attack drives unimaginable goals for Juventus.

Not only are Juventus aiming for their eighth league consecutive title, their hopes are set high for their dream of holding the Champions League trophy. Juventus have realized their timeframe to win it is now and are doing everything in their power to get there. With the move of Ronaldo and Bonucci coming back, we can see them solidify and strengthen the squad with experience in addition to youth. Before the arrival of CR7, their aim was to revamp the squad and they did just that. The playmaking from the back from Alex Sandro, Joao Cancelo, and Leonardo Bonucci will be able to provide the service that the attack will require.

There are many potential lineups that fans are envisioning, specifically the front three. The power trio up top will, of course, include none other than CR7, but how will Mister Allegri line him up? Many would prefer he play as the sole striker with Douglas Costa and Paulo Dybala on the wings, but others would like to see him on the left with Mandzukic up top and Dybala on the right. Ronaldo has a new ambition and certainly a new challenge. After winning in the English Premier League and La Liga, he’s decided to add the Serie A and winning with Juventus to his trophy shelf.

New teammates of Ronaldo have all spoken out about the excitement of playing alongside him and how he will positively bring along with him additional determination to retrieve the same challenge the black and white are after. New goalkeeper Mattia Perin brought to light how special it is to have one of the top two best players in the world come to Italy: “It’s really important for everyone at Juventus as players but for the whole Serie A. This will certainly become one of the best leagues in the world.”

There are five potential challengers this year in the scudetto race which will surely bring along a very competitive season. After losing two of their star players, Roma signed a number of new youth signings and incorporated a large variety of different attackers.

While they remain dangerous, Napoli under the reign of Carlo Ancelotti will be an exceptional club. Can Ancelotti replicate their form? Can they keep the pace? Napoli will employ new tactics and different styles to make up for their loss of playmaker Jorginho.

A third potential threat rises from AC Milan as they look to step up their game from last season. They’ve begun by expanding the youth on the backline adding Mattia Caldara alongside Alessio Romagnoli. Having brought in Gonzalo Higuain from Juventus and Diego Laxalt from Genoa, they’re looking to bring a mixture of youth and experience.

One of the biggest threats this year comes from Inter Milan as they continue to build. The Nerazzurri had a great mercato strengthening their starting lineup while also adding important depth to the squad.

Last but not least the major threat to Juventus is Juventus themselves. Their mental fortitude and determination must remain all season long. Having laid out the foundations for a Champions League winning squad, will this finally be their year to win not only Europe’s most prestigious prize but the treble as well?

With big signings come big expectations. The signing of Ronaldo will most definitely have eyes set on Serie A. Having gone to two finals in the last four seasons certainly hasn’t changed their ambitions as they are gearing up for hopes of a third finals appearance, and hopefully, the third time’s the charm. There are a number of challenges for Juventus to overcome this season, but fortunately for them, they’ve done it before.