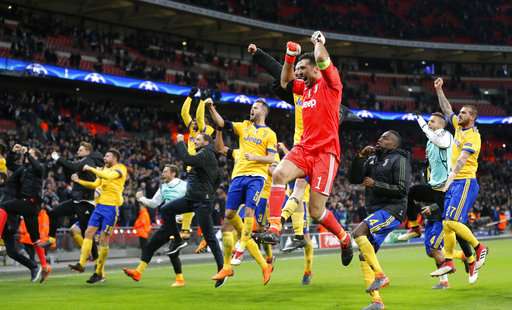 Juventus have advanced to the UEFA Champions League quarterfinal stage after defeating Tottenham 4-3 on aggregate.

After a 2-2 draw in Turin two weeks ago, Juve traveled to London with work to be done. Despite being down 1-0 in London during the second tie, the Bianconeri managed a comeback to advance.

Gonzalo Higuain and Paulo Dybala each scored in the span of three minutes to send Max Allegri’s side into the UCL quarterfinals.

The draw to determine Juve’s opponent in the quarterfinal stage will be held on Friday, March 16. This is the third time in the last four editions of the Champions Leauge that Juventus have reached the quarterfinals.

“The lads and club deserve compliments for what they’ve been doing over the last few years,” head coach Massimiliano Allegri told Mediaset Premium after the match. “It was a prestigious victory at a stadium like Wembley. We waited for the right time, showed patience and won the game. Over the two legs, I think our qualification was deserved.