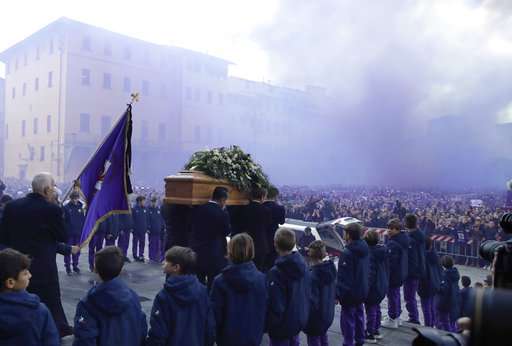 The world of Italian football came together this morning to pay their final respects to Fiorentina captain Davide Astori. The 31-year-old was passed away in the early hours of Sunday morning due to a suspected heart attack.

While the funeral mass was only open to family, friends, and some members of the football community. Delegations from numerous clubs and former teammates were in attendance as over 6000 fans filled up Piazza Santa Croce.

“I speak on behalf of the entire squad,” Fiorentina midfielder Milan Badelj said in his eulogy. “You were a real man. You always spoke with your heart, keeping us united — inciting us older players and indicating the way to the youngsters. Your parents must know that they got nothing wrong. You would be a son or brother that every one of us would like to have if we could choose. You make us feel secure all the time and we will never forget your smile.

Giorgio Chiellini dedicated last night’s victory to Astori, “It would not be enough to dedicate this win to him because this win is nothing. I just hope one thing: that we can carry on what Davide was for us, and that smile he had every day.”

Astori’s body will be transferred to his birth town of San Pellegrino Terme, where he will be laid to rest on Friday. 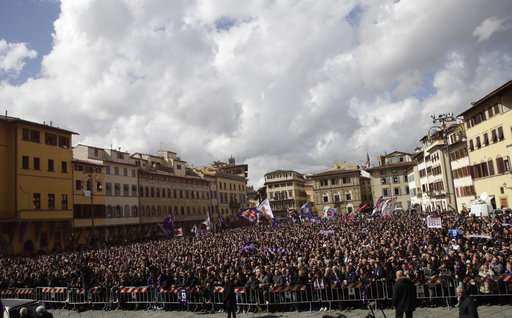 People stand outside the church during the funeral ceremony of Italian player Davide Astori in Florence, Italy, Thursday, March 8, 2018. The 31-year-old Astori was found dead in his hotel room on Sunday after a suspected cardiac arrest before his team was set to play an Italian league match at Udinese. (AP Photo/Alessandra Tarantino)