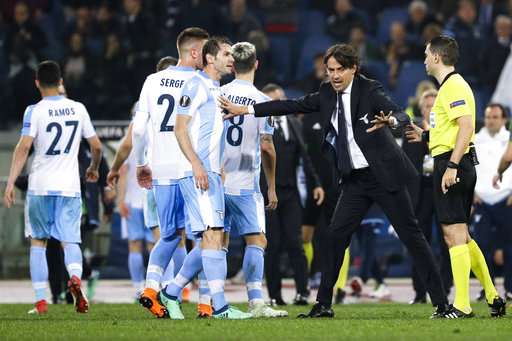 Serie A is finally back and Lazio take on Napoli for their first match of the season. The Biancocelesti have been extremely busy on the transfer market this summer – something very unusual for Laziali. Claudio Lotito is spending money to improve the quality of the squad for once. I repeat: Lotito has spent a total of €41.50 million this summer and the repercussions of this are tremendously positive. Ticket sales have increased, the number of sales on biancocelesti items have increased; people want to see Lazio play again, and it is about time.

Lazio have made 8 signings this transfer window, all listed below alongside their positions, nationalities, and previous clubs.

In addition to the new arrivals, Lazio have also re-acquired the following players, as a result of their loans expiring. However, the only potential players to be included in next years squad are Italian youngsters Danilo Cataldi and Alessandro Rossi.

Lombardi looked to be a strong replacement for Dusan Basta if he is to leave (which may still happen), but for the time being it looks like he is behind Caceres, Marusic, and Patric for the right flank.

A risk was taken when Lazio signed Morrison and it ended the exact opposite as it was intended; the biancocelesti will most likely let his contract expire before letting him play a match for Lazio.

Kishna has become quite injury prone – his youth was full of talent, but he has been unable to regain form and quality.

Maurício was a starter for Lazio, but many fans have already forgotten about the player – his hot head and aggressiveness caused him to pick up too many yellow and red cards, as well as fouls.

Oikonomidis is still a potential star for Lazio and the country of Australia. A few more years on loan could do the player some good.

Lazio have allowed 6 players to leave the club permanently so far.

In addition, the following players have left the club on a loan basis.

Although Lazio have had several acquisitions this summer, the squad is likely to remain very similar to last years starting XI. The newer players will most likely work their way into the starting lineup as they get used to the league and style of play.

The first option (and most probable option from the start of the season) is most likely to be a 3-5-1-1 formation as pictured below. The starters from last year will all re-appear, despite Stefan de Vrij, who has been replaced by Francesco Acerbi. 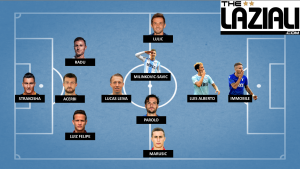 The second rendition would feature a few different starters, with the same formation. As some Lazio veterans start to age, such as Marco Parolo and Senad Lulic, I believe the new signings will take over their positions: new Kosovan international Valon Berisha is a workhorse, box-to-box midfielder similar to Parolo, who I believe will easily replace the Italian international; Riza Durmisi has that left foot Lulic does not, while also providing more cover on the defending third. The last change comes from Martin Caceres – the former Juventus defender and current Uruguay international who is coming off a fantastic World Cup. Caceres’ contract expired this summer, but Lazio took the option to keep him in Rome after seeing his play on the right and left flank for his nation. I would not be surprised to see Caceres starting if Adam Marusic begins to have a few poor performances. 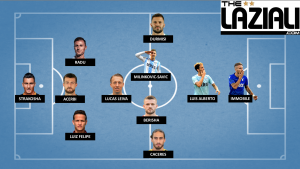 The final alternative sees a change of formation and starting XI. The midfield trio switch from two more attack-minded players, to two defensive minded-players; Croatian international Milan Badelj enters the squad to sit beside Lucas Leiva in a regista and/or mediano role, providing extra solidity for the back-line. Although Lazio scored the most goals in Serie A last season (89), they also conceded quite a bit (49), an issue that Simone Inzaghi hopes to correct ahead of this upcoming season. 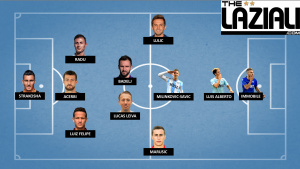 For the time being, the other new signings (Joaquin Correa, Sprocati, Proto, Anderson) will be substitutes in their desired and designated positions: Correa will replace Luis Alberto; Sprocati (if not sent on loan) will most likely replace Lulic or Luis Alberto; Silvio Proto will take over for Strakosha at certain points throughout the season in-goal; and Anderson (if not sent on loan) will likely be a second or third substitute for the right flank of Lazio’s defense – either at the right center-back or right wing-back position.

My prediction for Lazio ahead of this season is a fourth-place finish, behind the likes of Juventus, Inter, and Napoli. Most know how hard it is to decide the order of the top 4, 5, or 6 positions in the league, however, with Lazio’s unity and squad depth this season, I believe they will be able to put up more consistent and quality performances across all competitions. In addition, Lazio wants redemption for the injustice towards them from the referees, and more importantly for the loss against Inter in the final match of the season, which resulted in a 5th placed finish in the Serie A and Europa League football, instead of a 4th placed finish and Champions League football. Lastly, top sides such as Milan, Inter, Napoli, and Roma have undergone multiple changes to their sides – especially their starting XI (and coach for Napoli). These sides have not had a lot of time (or matches) to have interconnectivity and fluidity between themselves, and this may benefit Lazio, in addition to the busy schedule they have (with Champions League and Europa League).

Despite multiple signings for the biancocelesti, Juventus, Napoli, Inter, Milan, and Roma have made top-class signings for their sides – players with loads of potential, or loads of experience in the most intense and difficult competitions. Lazio have made 8 signings, but no one can say that any of these players are true and proven superstars. Simone Inzaghi is able to bring the best out of all of his players, but will it be enough to overcome the tough competition that exists?

Follow The Laziali for coverage on Lazio all season.