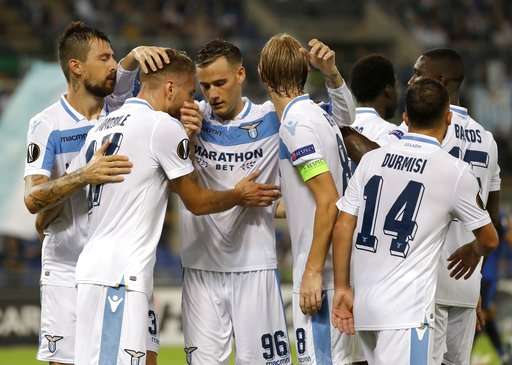 Lazio were drawn into UEFA Europa League Group H, along with Olympique de Marseille, Eintracht Frankfurt, and Apollon Limassol. Here is a preview of each squad and how the Biancoceleti should fare in the group.

Marseille are based in France (Ligue 1), the top tier of French football. Founded 118 years ago; OM have won Ligue 1 nine times, the Coupes de France ten times, the Coupes de la Ligue three times, and the Champions League once – the only French side to do so. After an impressive performance in the UEFA Europa League last year (which saw them reach the final against Atletico Madrid), their goal of securing the trophy fell short as they lost by a score of 3-0 to the Spanish club. After dreams were shattered, you can expect Marseille to be entering the competition hungrier than ever; they are one of the clubs who has automatically qualified for the competition, similar to Lazio. Expect Marseille to be one of two challengers for the top position in the group.

Eintracht are based in Germany (Bundesliga), in the top tier of German football. Founded 119 years ago, Die Adler have won the Bundesliga once, the DFB-Pokal five times, and the UEFA Cup once. Winners of the DfB-Pokal last year in a dramatic 3-1 victory over Bayern Munich, Frankfurt automatically qualified for the group stage of the 2018–19 edition of the UEFA Europa League. For a squad that managed an eighth-place finish in the Bundesliga, not only was it dramatic, it was quite surprising. A tough competitor without a doubt for Lazio and Marseille, the German club have lost some of the key pieces to their success last season, including Croatian coach Niko Kovač.

Apollon are based in Cyprus (First Division), in the top tier of Cypriot football. Founded 64 years ago, the Theos have won the First Division title on three occasions; the Cypriot Cup nine times; and the Cypriot Super Cup three times. Their qualification for Europa League was quite a long and difficult one, as they had to face FC Stumbras (Lithuania) in the First Qualifying Round; FK Željezničar Sarajevo (Bosnia) in the Second Qualifying Round; and FC Basel in the Play-off Round. After a 1-0 win at home in the second leg, Apollon moved forward due to away goals, having scored two in their first match away in Switzerland (in a 3-2 loss). A club to not take lightly, Apollon have appeared in not only the Europa League before but also the Champions League.

With Lazio and Marseille’s squad depth and quality, I expect the Italian and French side to top the group in first and second place without a doubt. The issue, however, is who will finish first. This outcome of Lazio topping the group will depend on who plays in the Europa League – more specifically who will play in each match. I have a feeling that the Biancocelesti will play their substitutes a lot in this competition, which may come back to haunt them if they are unable to find goals. In the two matches against Marseille, Lazio must come out at full force with a regular starting XI to secure victory if they want to finish in that number one spot in Group H.