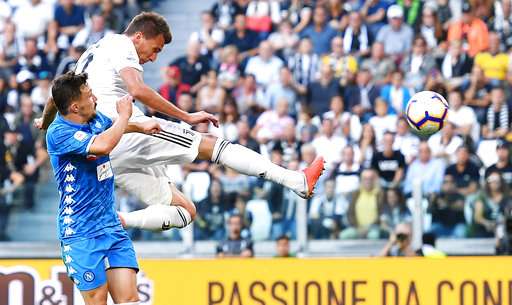 Juventus underlined their status as clear favourites for an eighth consecutive Scudetto with a come-from-behind win over Napoli on Saturday evening to extend their lead at the top of Serie A to six points.

Massimiliano Allegri produced a minor surprise with his team selection, opting to go with Paulo Dybala over winger Federico Bernardeschi. The Argentinean playmaker has often found himself on the bench this season but retained his place in the starting line-up on this occasion after a positive display in midweek against Bologna. Yet it was Napoli who started on the front foot, and they took the lead on the ten-minute mark. Leonardo Bonucci’s misplaced pass was seized upon by Allan, who combined with Jose Callejon to set up Dries Mertens for a simple tap-in.

The champions appeared edgy, making basic errors which were met with frustrated groans from fans inside the Allianz Stadium. Juventus are never down for too long though and gradually worked their way back into the contest. There was a sense of inevitability about the equaliser when it arrived. Cristiano Ronaldo, enjoying his best game in a Juventus shirt, twisted and turned down the left flank, before hanging up a teasing cross for Mario Mandzukic to power home. Honours even as the whistle went for half-time, although it was clear who had the momentum for after the break.

Led by Ronaldo and Mandzukic, Juventus had their tails up and were ahead less than five minutes into the second half. As has become his trademark, Ronaldo cut in from the left-hand side, unleashing a dipping effort that hit the base of the post; Mandzukic was first to the loose ball, finding the net from close range. Carlo Ancelotti’s men had an uphill task on their hands and did not help themselves when they were reduced to ten men with just over half an hour to play. Mario Rui’s late tackle on Dybala saw him given his marching orders, much to the delight of the partisan crowd.

Juventus appeared in control, and added some gloss to the scoreline, but not before a major scare from the visitors. Callejon was played through on goal following an incisive move, but his shot was beaten away by Wojciech Szczesny. This would prove costly, as Bonucci atoned for his earlier mistake by sliding in at the back post from a set-piece routine to put the game beyond doubt.

In Saturday’s early afternoon showdown, Roma earned the bragging rights over their biggest rivals, beating Lazio 3-1 in the Rome derby.

Lazio entered the game in better form, and were the superior team in the early stages, dominating possession from the off. Yet it was Roma who created the best chances, with Thomas Strakosha having to remain alert to turn away efforts from Edin Dzeko and Javier Pastore. Roma eventually got the breakthrough on the stroke of half-time. Luiz Felipe and Strakosha failed to deal with a lofted ball into the box, whilst Martin Caceres’s clumsy attempted clearance dropped at the feet of Lorenzo Pellegrini, who produced an improvised back-heeled finish into the unguarded net.

A similar pattern of play followed after the interval, with Lazio pouring forwards at times, but being unable to fashion many clear-cut opportunities. Instead, they were gifted a way back into the game as Federico Fazio dithered on the ball in defence, allowing Ciro Immobile to steal away possession before drilling the ball into the bottom corner. At this stage, the game was firmly in the balance.

It was Roma who came up with the answers in the final twenty minutes. Aleksandar Kolarov benefitted from Strakosha’s suspect positioning to fire home a free-kick from the edge of the area before Federico Fazio wrapped up the points with an unstoppable close-range header. A vital result for Roma, who have picked up consecutive wins for the first time this campaign. Meanwhile, Lazio have now not beaten a ‘top six’ club since they overcame Juventus in Turin last October. Simone Inzaghi must find a way to arrest this barren run if Lazio are to break into the top four this year.

AC Milan gave early season high-flyers Sassuolo a reality check on Sunday night, crushing the hosts 4-1. Sassuolo would have moved above Napoli and into second with a win but were no match for Milan who triumphed courtesy of a brace from Suso, whilst Franck Kessie and Samu Castillejo also got on the scoresheet. Could this be the turning point for Milan after an indifferent start to the season?

Krzysztof Piatek scored his seventh and eighth league goals for Genoa, who overcame a hapless Frosinone side, 2-1. The Pole has been a revelation in Italy after his summer move from Cracovia, and his incredible goalscoring form shows no signs of tailing off just yet. Frosinone can cling to the consolation that after almost ten hours back in the top-flight, they finally scored a goal. Camillo Ciano netted from the spot to end their unwanted drought.

Another comforting fact for Frosinone is that they are not even bottom of Serie A. That position is held by Chievo, with matters not helped this weekend as they slumped to a 1-0 defeat at home to Torino. After an encouraging start, Chievo were left to hang on in the closing minutes but were undone by a Simone Zaza winner in the 89th minute.

Fiorentina are up into the top three after a controversial 2-0 victory over Atalanta. The main talking point of the contest arrived on the hour mark, as Fiorentina were awarded a penalty when Federico Chiesa went to ground inside the area. Replays showed that minimal contact was made, and it was clear why Atalanta were so incensed by the decision. The spot-kick was successfully converted, and Fiorentina made it two in injury time, with Cristiano Biraghi profiting from the use of goal-line technology. An example of how technology can work, though Atalanta will rue the fact that VAR did not overturn the game-changing penalty call.

Inter Milan held off a spirited Cagliari side to record a 2-0 win. Goals at either end of the game from Lautaro Martinez, his first in Italy, and Matteo Politano validated Luciano Spalletti’s decision to rest a number of players ahead of Wednesday night’s Champions League assignment in Eindhoven.

Parma returned to winning ways with a narrow 1-0 defeat of Empoli. Gervinho sealed the three points as he latched onto a perfectly weighted through ball from Antonino Barilla before sliding the ball under the onrushing keeper. Concerns over his fitness remain though, as he trudged off moments after half-time. Parma will hope that it is just a minor setback.

Bologna moved out of the bottom three, as they edged out Udinese 2-1. Riccardo Orsolini’s goal eight minutes from time was enough to see the hosts jump to 15th place, just a spot and a point behind their opponents in the table.

The weekend’s action concluded in Genoa as Sampdoria hosted SPAL on Monday night. Sampdoria overturned an early deficit to win 2-1. Fabio Quagliarella and Gregoire Defrel have been the in-form strike duo so far this season and that continued here. The former assisted both goals, with Defrel tucking home the winner to hand Sampdoria their first win in four.