Luis Enrique: How Troubles at Roma Could Still Translate into Possible Success in England 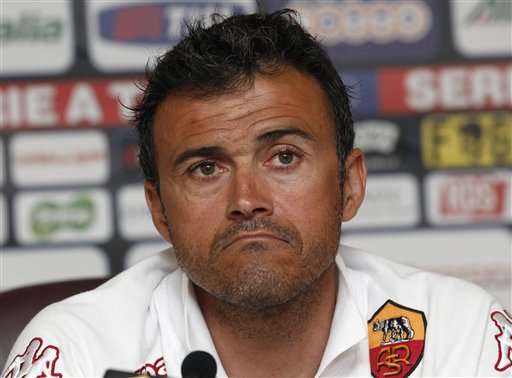 Adapting on and off the pitch to unfamiliar surroundings and brands of football can be challenging for any professional to deal with, whether it be as a manager or player. New beginnings yield ranging levels of expectations; from supporters, the media and just about anyone with a vested interest in a given club. Either rise to the occasion by producing on the pitch and meeting seasonal objectives set forth by the board prior to the campaign, or simply succumb to the pressure and let the circumstances surrounding you ultimately decide what your fate of shall be.

During Luis Enrique’s brief stay in the Italian capital of Rome, it was the latter that cut his tenure to just one season in 2011-12. Since then, the Spaniard has grown from the difficult experience, now becoming one of European football’s most in-demand tacticians for hire as we creep closer to the summer – but that did not happen overnight.

Serving three seasons at the head of Barcelona’s B squad, Enrique would land his first real coaching gig in the top flight by inking a deal with Roma in June 2011. Ironically enough, he was stepping into the role after Leicester City hero Claudio Ranieri was sacked in late February before caretaker Vincenzo Montella filled in for the remainder of the season, in which the Giallorossi finished a disappointing sixth.

Without question, Roma hoped Enrique’s CV during his playing days at both Real Madrid and Barcelona, along with his coaching experience in Catalunya, would translate into a positive first season and bring stability to the post. Early on, however, Enrique and Roma got off on the wrong foot, and immediately, found himself in a nightmare scenario with no way out.

Failing to advance out of the UEFA Europa League play-off round after a defeat to Slovan Bratislava over two legs, Enrique was thrown into the fire almost immediately by Italian media who did not take much time to criticise him at every failure.

Like in England, Italian pundits and journalists are relentless in their approach to stir controversy and sell a headline. Not only did Enrique have his plate full on achieving satisfactory results sufficient enough to elevate Roma back into the Serie A conversation at the top, but also find a way to survive in a hostile environment.

Enrique struggled to deal with the media, and because of that, fans let him have it. Banners would be raised around parts of the Stadio Olimpico with the words “Luis, vattene da Roma,” basically calling for exile. There is more than an argument to be made that because of this treatment, Enrique rendered less than effective tactics, that the media lambasted week in and week out.

Enrique deployed his usual 4-3-3 but switched back during the season to a 4-3-1-2 as things progressed. Captain Francesco Totti, who initially did not receive many minutes under Enrique, was inserted as a number 10 shouldering the bulk of playmaking responsibilities to supply strikers Erik Lamela and Dani Osvaldo up front. Yet, in a system with a focus on possession, Enrique’s Roma had their share of shortcomings as a collective unit to turn the possession into enough goals.

Defensively, Roma were leaky, conceding 54 times in the league, with a desire from Simon Kjaer to do it all on his own and an ageing Gabriel Heinze attributing plenty to the lack of a stable back line. Tactically, Enrique’s approach was not effective enough, especially against sides that were not afraid to sit back and strike Roma on the counter – which drastically hurt them overall en-route to 14 losses and a subpar seventh-place finish.

At the end of the season, Enrique stepped aside voluntarily and took a year off from coaching to reflect on his first failed objective on the bench in top-flight football. He then took up a job back in Spain with Celta Vigo for the 2013-14 term before subsequently being appointed as Barcelona manager the year after, where he had obvious success in a trophy-laden spell. With Arsenal looking for Arsène Wenger’s replacement, and Chelsea perhaps on the verge of moving on from Antonio Conte, Luis Enrique could find himself in the Premier League next season. But does his time at Roma and handling of the media have any effect on whether Arsenal or Chelsea carry on with their courtship of the Spaniard?

The Gunners’ search for Wenger’s successor will be strenuous to say the least, and they definitely need to get this one right. There are those who believe Arsenal will look for an expensive manager who has won trophies before, and who can handle the pressures of succeeding an icon like Wenger. Enrique obviously laboured through his lone season in Italy but managed to get back on his feet immediately after, proving he can respond to adversity in a positive manner. However, coaching Arsenal during this delicate time and rough spell will be arguably his biggest challenge; comparing it to anything else he has ventured into thus far is near impossible.

It remains a bit unclear as to which direction Arsenal will head in this summer as they could either go with a high-profile name with a winning pedigree in an effort to win over the supporters or appoint a lesser-known boss that signals somewhat of a rebuild phase. As for Chelsea’s possible vacancy, Enrique seems like a proper fit to replace Conte. He has proved he can elevate players during his three years at Barcelona, and adjust tactically. However, should he fail to kick on and replicate the same success he enjoyed in Spain, owner Roman Abramovich’s short leash may weigh on Enrique’s conscience to compete for a league title.

Nevertheless, Enrique’s time in Italy served as a valuable learning experience and one he has since grown exponentially from as a treble-winning manager, which should help him cope with the pressure that he will face in his next endeavour.

The relegation battle|Who remains in Serie A next season?