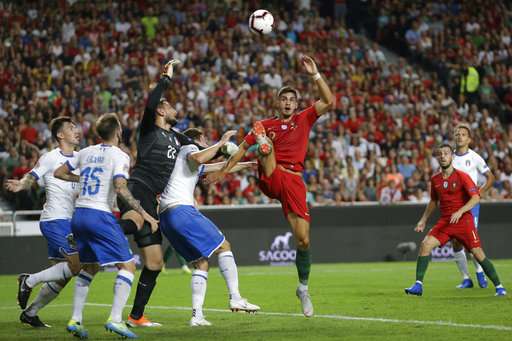 In short, Italy were not able to contain Portugal in yesterday’s UEFA Nations League match. The Azzurri were defeated 1-0 in Lisbon, a score that does not speak about the luck Italy received.

The match could have been much worse for Mancini’s side: a goal-line clearance by Alessio Romagnoli; a deflected cross off of Bryan Cristante that hit the crossbar; and a terrific shot from Bernardo Silva that was parried by Gianluigi Donnnarumma to make up for his previous errors – it was a match that could have easily ended 3-0 in favor of Portugal. Youngster Andre Silva, Milan’s ‘flop’ of last season who was sent on loan to Spanish side Sevilla this summer, was the lone scorer taking a first touch out of his feet in the 18-yard box to smash a left-footed curler past former teammate Donnarumma at the start of the second half.

Italy had glimpses of promise and good movement, but for most of the match, it was the Portuguese side (without Cristiano Ronaldo) that dominated. A squad and nation that is still ‘under construction’ by the FIGC and Mancini, in yesterday’s match, nine different players started compared to the first match against Poland. Donnarumma and Jorginho were the only two to remain in the starting XI as the coach tries to sort a new formation and implement new tactics:

At the end of the challenge, head coach Roberto Mancini spoke to the microphones of Rai: “Individual mistakes must be limited, but the team gave everything. We must find solutions to score goals. The boys are young, they have to grow up. Some are playing for the first time at high levels. We were aware of it. Today we had a good first half, but we have to score, this is the most important thing”.

On a positive note, it does look like Mancini is trying to rebuild the squad and nation starting from its youth, with the likes of experienced players such as Gianluigi Buffon, Leonardo Bonucci, Giorgio Chiellini, Andrea Barzagli, Antonio Candreva, Daniele De Rossi, and Marco Parolo all starting to make way, being left to the sidelines.