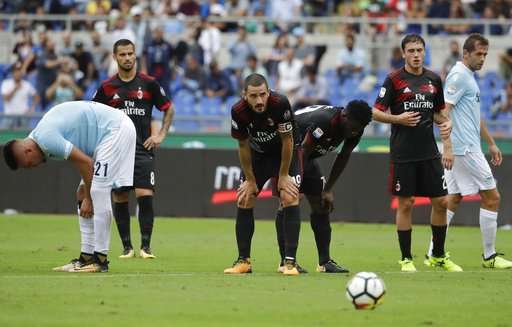 The Eagles have been in sensational form of late – winning their last two encounters 5-1 and 3-0, respectively as Simone Inzaghi’s men defeated Chievo Verona and Udinese at the Stadio Olimpico.

Lazio are on the road this weekend as they travel to the San Siro to face AC Milan, who so far, have had a torrid season, in-spite of spending heavily in the summer.

Following the recent appointment of former player Gennaro Gattuso, performances have somewhat improved. But, the Red Devisl are still seventh in the Serie A table and are a staggering 23 points behind leaders Napoli.

Of course, the aim for Gattuso’s men now will be to secure European football, but that’s easier said than done, with the squad clearly struggling to gel.

Striker Andre Silva, in particular, has struggled following his big-money move from Portuguese outfit FC Porto in the summer and has failed to register a league goal since his move and has been linked with a move away from the San Siro during this window.

The striker had promised to be one of their signings of the summer, but ultimately, has failed to deliver. If there is one player that Lazio will need to be wary of, it’s another summer signing, in the form of Franck Kessie.

The 21-year-old Ivory Coast international has flourished since his loan move from Atalanta and has bagged six goals and setup two more from midfield already this season, but other than that, nobody has really stepped up to the plate this season, therefore, Milan have struggled going forward, as well as defensively this season.

Lazio, on the other hand, have been sublime under the influence of Inzaghi and will be expected to pick up three points come Sunday evening, especially given their current form.

They have talent all over the pitch, too. Ciro Immobile could well help fire the goals to earn them a place in next year’s Champions League, having already bagged 20 goals in 19 league appearances this season. However, the 27 year-old was absence in their previous outing against Udinese due to a calf injury.

Serbian attacking midfielder Sergej Milinkovic-Savic is also a talent to saviour and the 22 year-old attacking midfielder is already being lauded as one of the hottest properties in Europe at the moment, and his eye for a goal and vision could well help Lazio pick up another three points on Sunday.

Of course, you cannot rule AC Milan out just yet, due to the talent they have within their disposal but on paper, Lazio should win this, especially if they want to maintain the pressure on Napoli and Juventus.

You can’t fault his passion or drive, but Gattuso has got some job on his hands. You have to him credit for taking the job on in the first place – he was a hard-hitting tackler on the pitch and you can see he has similar traits in his managerial style.

If they win on Sunday, it would give AC Milan a huge boost and Gattuso, for one, will be up for it, there is no doubt about that.

Done an incredible job with the Eagles – won over 60% of his games in charge and has got Lazio playing some tremendous stuff. European football will be the goal come the end of the season once again and they’re more capable of achieving that, but they have to ensure they keep picking up points on the road and at the Stadio Olmypico.

Nikola Kalinic is questionable with a muscular knock. Andrea Conti (ACL) and Ricardo Rodriguez (Suspended) are out.

Ciro Immobile is doubtful with a calf injury.

Roma’s Nicolo Zaniolo not in favour of Bournemouth...