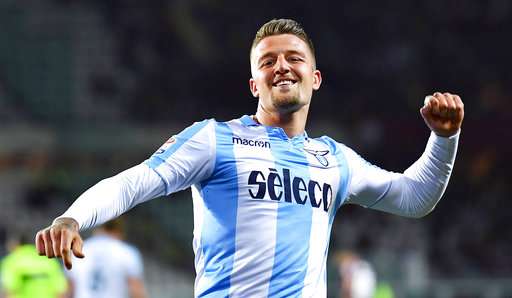 Paris Saint-Germain, Real Madrid, Barcelona, Juventus, Manchester United, and now Tottenham. All are powerhouses of European football, with a reported common desire to bring the same young and talented player to their side. His name? Sergej Milinković-Savić: the 23-year-old Serbian international who plays as a central midfielder for Serie A side S.S. Lazio.

Milinković-Savić was born in Lleida, Spain despite both of his parents being of Serbian descent. Sport was in his blood from the very beginning, with his father and mother both professional athletes – his father a footballer, his mother a basketball player.

Following in his father’s footsteps, Milinković-Savić started his youth career at Austrian side Grazer AK (one of his father’s former clubs) before moving to FK Vojvodina in Serbia at the age of 11. He spent six years at Vojvodina as a youth player before signing his first professional contract with the club in 2012, and in the following season, he helped the club win the Serbian Cup with his three goals in 13 league appearances.

Fast forwarding to the summer of 2014, the young Serbian was snatched up by Belgian outfit Genk at the age of 19 for a fee of around €900k. An incredible season would follow, as he played in 24 matches, scoring five goals in the process. This is where he managed to catch the eye of Lazio sporting director Igli Tare. He moved the following year to the Biancoceleste for a fee of around €16m. Since joining, he has made over 100 appearances for the club, finding the back of the net 20 times and producing 13 assists in the process.

Compared to his first two seasons, however, Milinković-Savić has been a reckoning force for the Italian side this year. With 46 appearances in all competitions, he has managed a total of 13 goals and six assists that has attracted an interest worldwide to find out more about his abilities. This has been due to the fact that coach Simone Inzaghi has entrusted him with a starting 11 position in the heart of the midfield in a 3-5-1-1 formation. He has rarely missed a game, showing how exceptional his fitness have been throughout the lengthy campaign that has included a deep Europa League run and the amount of trust he has with the coach.

What has surprised many this year has been Milinković-Savić’s ability to adapt to become one of Serie A’s most complete midfielders. With a tall and strong stature of 1.91m, he has delivered both offensively and defensively. His strengths come with his size, with a powerful shot and a strong aerial ability that makes him an impregnable opponent in terms of competing in 50/50 challenges. Excellent at holding up play in the box and therefore creating space for Lazio’s attacking force to dominate, not only can the Serbian star use his powerful shot to score goals, but his metronome qualities too with a 79.2% pass success rate, a high figure in a Lazio side that plays very direct football.

Recently, Manchester United and Tottenham have pulled ahead to become favourites to sign the player, according to English media. This is due in part to the fact that the acquisition of a central midfielder for both these sides is a top summer priority, and because the supposed amount that Lazio President Claudio Lotito has been requesting, close to £80m, prices other sides out of a deal. Although Tottenham are not known for lavish spending, it is thought that a big-money sale of a current star of theirs is in the offing this summer, which would provide the cash required for a Milinković-Savić deal.

With this in mind, how would Milinković-Savić fit into Mourinho and Pochettino’s sides respectively?

Manchester United: José Mourinho currently utilises a 4-3-3 or 4-2-3-1 formation. In both tactical shapes, there is room for three central midfielders – Paul Pogba, Nemanja Matić, Michael Carrick and Scott McTominay usually stay back in the holding positions, while Ander Herrera, Jesse Lingard, Juan Mata, Alexis Sanchez, Marcus Rashford, and Anthony Martial are more attack-minded. The signing of Sanchez has complicated United’s plans of action, however. He was brought in as an intended starter to support Lukaku from the left-wing, and this has led to less playing time for players like Rashford, Martial and Juan Mata, leading to the general conclusion that at least one of these players, most likely the Frenchman, will be sold in the upcoming transfer window as they look for more first-team minutes. Milinković-Savić, if signed, would likely play alongside fellow Serbian international Matić and Frenchman Pogba in an inverse triangle middle three: Matić holding back with Pogba and Milinković-Savić ahead of him. This would allow for a physically dominant midfield trio that would fancy themselves against any side in the world in terms of winning the 50/50 midfield battle. Milinković-Savić has a nearly analogous playing style to Pogba, which should worry Manchester United fans if he is to actually come into the side, but after a period of adjustment, this projected midfield trio could become unstoppable; smart on the ball, ability to score from anywhere whilst retaining possession smartly.

Tottenham: Mauricio Pochettino also runs a 4-2-3-1 formation, headed by Englishman Harry Kane – a prolific and deadly goal-scorer. Held behind him is usually the young Dele Alli with two of Lucas Moura, Son Heung-Min, Moussa Sissoko, Erik Lamela, and Christian Eriksen out wide. I believe Milinković-Savić would fit in the holding two of this formation if he were to join the squad. These positions are currently occupied by Belgian star Mousa Dembélé, Eric Dier, Victor Wanyama, and youngster Harry Winks. However, with Wanyama considering his future at the club this summer and Mousa Dembélé struggling with what is likely a permanent foot problem, Tottenham are on the hunt for a replacement and it is difficult to argue that Milinković-Savić would be a downgrade on either. Known more for his attacking play, the Serbian however is potential the perfect fit for a natural holding midfielder. Like his Serbian teammate Matić, Milinković-Savić would has a dominant stature that enables him to win challenges, matched by the ability to produce consistent, delicate and forward long passes, as well as harbouring the perceptiveness required to protect his defence. One aspect of his game that remains relatively untested is his ability to break up opposition play consistently, as he usually remains further up the pitch in Lazio’s current formation. From set-pieces, with enough time on the training ground, he would provide Tottenham with another serious weapon in this regard. He is also not afraid of shooting from distance, having scored five goals from outside the box this season.

Where would Milinković-Savić fit in better? Having watched him play for Lazio for three years, I have seen Milinković-Savić grow first hand. From a scared and nervous individual with a fragile grasp of the Italian language and the Serie A and its tactical norms, nor receiving much playing time at all, he has grown and adapted not only on the pitch, but off the pitch as a professional footballer. Personally, a line-up with Lukaku, Sanchez, Martial, Rashford, Lingard, Matic, Pogba and Milinković-Savić not only sounds lethal, but very promising. We have seen his attacking displays – especially this season – on full effect as he has taken control of matches, becoming one of the most prominent young midfielders in football. Mourinho loves physical players that can reliably produce when called upon and he has coached former and current players that have similar attitudes and playing styles to Milinković-Savić, such as Matić and Pogba, Mario Balotelli, and Zlatan Ibrahimovic (to name a few). Obviously, football is only half about attacking, but for Milinković-Savić it is in that 50% of the game that the Serbian has most experience in and will thrive best at. With Matić holding back in front of the defenders and Pogba and Milinković-Savić having more space to move up the pitch and control the midfield, Manchester United could be a force to reckon with next season should they add the Lazio man to their ranks.

Dynamic, strong, and technically gifted, Igli Tare and Lazio have used their footballing knowledge to uncover what may be one of the most expensive players in the history of the game if a transfer is to occur this summer.