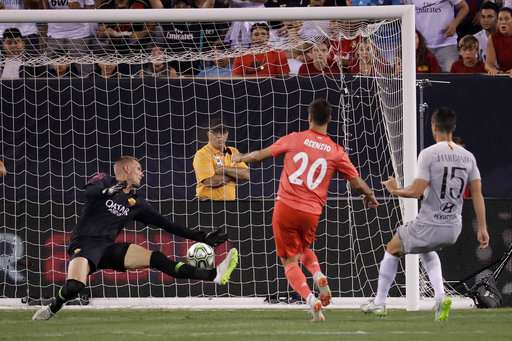 Due to inclement weather, the match at MetLife Stadium kicked off 30 minutes late and Roma got off to a slow start.

Just 90 seconds into play, Gareth Bale played an exquisite through ball with the outside of his left-foot to play in Marcos Asensio, who buried the ball into the back of the net. The Giallorossi defense was picked apart way too easily as things didn’t get much better.

Los Blancos doubled their lead less than 15 minutes later as Bale easily glided by Ivan Marcano in a 1v1 and slotted home at the near post from the top of the box.

Roma slowly got themselves situated into the match but Real certainly enjoyed the better of the proceedings.

The Giallorossi kept pushing forward in the second half looking to find the net and eventually did in the 83rd minute. Patrik Schick was able to get a flick on a long-throw as Kevin Strootman was at the far post to slot home. Roma closed out their American tour with a 2-1 loss to the three-time defending European Champions.

Despite the match truly feeling like a meaningless pre-season friendly, 51,528 fans came out on a Tuesday night. Unsurprisingly the crowd heavily favored Real Madrid but there was also a respectable showing from the Roma faithful.

“We had many chances but didn’t score for a while, unfortunately, we lost but we had a good tournament here [in America],” goal scorer Kevin Strooman said after the match. “We have to do better but we’ve had many training sessions so we need to be ready for the season which starts in nine days. Now we’ll return to Rome to prepare for the first match [against Torino].

“My starting eleven was not my strongest lineup but considering the conditioning of the players,” Roma head coach Eusebio Di Francesco said in his post-match conference. “Obviously we can do better in many aspects but do not forget who we were playing.”

This was the final match in the United States for each club as they will now travel back to Europe and undergo final preparations before their respective seasons begin.