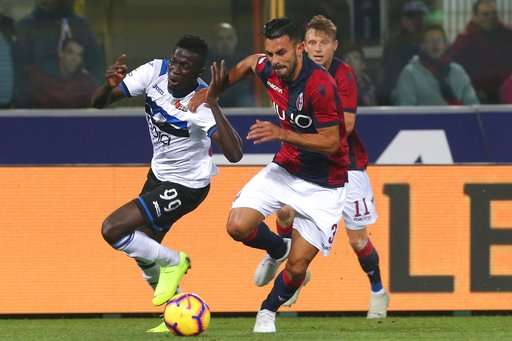 Atalanta make it three wins on the spin

Atalanta moved into the top half of the table on Sunday night, as they came from behind to win away at Bologna 2-1. After a wretched start to the season, Gian Piero Gasperini’s side appears to be firmly back on track, showing their mettle in testing conditions to secure all three points.

Despite the eventual victory, Atalanta made things difficult for themselves. Within three minutes, they were behind. Federico Santander twisted in the box and squared for Ibrahima Mbaye to tap home. Fresh from resounding wins over Chievo and Parma, the visitors were some way off their best in the first half. The in-form Josip Ilicic twice snatched at shots, failing to trouble the goalkeeper on both occasions. Captain, Alejandro Gomez, was sloppy in possession on a number of occasions, whilst the lone striker, Musa Barrow, was unable to link-up with his teammates effectively. A change was needed heading into the second half.

Gasperini wasted no time in making it. Barrow was replaced by Duvan Zapata, and straight away the momentum of the game shifted. Where Barrow had struggled to hold the ball up before the interval, Zapata flourished, bringing Gomez and Ilicic into the game regularly. Within twelve minutes, parity was restored. Bologna failed to deal with a ball into the box, leaving Gianluca Mancini to steer the ball into the bottom corner for his second goal in as many matches.

The game was now opening up, with both sides going for the winning goal, but Atalanta appeared to possess the extra quality in the final third. With torrential rain adding to the drama, Atalanta delivered the decisive blow. Once again, Bologna were the makers of their own downfall, as a poor defensive header from a cross fell to Zapata, who could not miss from inside the six yard box. The hosts battled to the end, nearly equalising through Rodrigo Palacio, but his acrobatic effort was smothered by Etrit Berisha.

Bologna remain just three points above the drop zone, whereas Atalanta have climbed to tenth, and will believe that a third top seven finish in succession is a realistic target once more.

Napoli, Inter Milan and Lazio all enjoyed resounding home wins ahead of a crucial week of European action. It was Napoli who put their marker down first, romping to a 5-1 victory over Empoli on Friday. Dries Mertens netted a hat-trick, and was joined on the scoresheet by Lorenzo Insigne and Arkadiusz Milik. The perfect warm-up for Tuesday night’s highly-anticipated clash with PSG.

Less than 24 hours later, Inter went one better, trouncing Genoa 5-0. Roberto Gagliardini impressed in central midfield, finding the target in each half. Matteo Politano scored his second of the season, whilst Joao Mario and Radja Nainggolan completed the rout with stoppage time strikes.

Lazio responded emphatically to their defeat at the hands of Inter earlier in the week, easing past SPAL 4-1 on Sunday. Unsurprisingly it was Ciro Immobile who was the star of the show, scoring a first half brace. Danilo Cataldi and Marco Parolo wrapped up the win after the break on a comfortable afternoon for Simone Inzaghi’s men.

Juventus continued their fine start to the season, seeing off a defiant Cagliari side 3-1 in Turin. Paulo Dybala put the home side in front inside sixty seconds, but Cagliari drew level when Joao Pedro drove a low shot beyond Wojciech Szczesny. However, Juventus were gifted the lead for the second time, as Filip Bradaric turned a harmless cross beyond his own keeper. The champions had to overcome a couple of nervy moments in the second half, before putting the result beyond doubt when Juan Cuadrado finished off a swift counter-attack late on.

Alessio Romagnoli struck his second stoppage time winner of the week, handing AC Milan a 1-0 win over Udinese. Substitute Bram Nuytinck was sent off for Udinese in the 95th minute, and could only watch on as Milan broke two minutes later, setting up Romagnoli who fired home from inside the area. The effort was initially ruled out for offside in the build-up, but this time VAR came to the rescue, correctly awarding the goal.

Roma produced a late equaliser to hold Fiorentina to a 1-1 draw in Florence on Saturday evening. It seemed that Jordan Veretout’s penalty was going to be enough to condemn Roma to another league defeat, but Alessandro Florenzi levelled matters with five minutes to go. It has been an unconvincing start to the campaign for Roma, who now find themselves five points behind their city rivals, Lazio.

Arguably the shock of the weekend arrived in Genoa, as Torino thumped Sampdoria 4-1. Andrea Belotti gave the visitors full control in the first half with two goals, before Iago Falque and Armando Izzo completed the scoring either side of a Fabio Quagliarella consolation goal. That victory lifts Torino to seventh, whilst Sampdoria have dropped into the bottom half, having conceded seven goals in their last two games.

Chievo succumbed to their seventh consecutive defeat, losing out 2-0 to Sassuolo. Federico Di Francesco broke the deadlock, and the second goal rather summed up Chievo’s appalling season thus far. Emanuele Giaccherini attempted to chest the ball back to his goalkeeper, Stefano Sorrentino, who was on the floor after making a point-blank range save. Sorrentino could not scramble to his feet in time, with the ball trickling into the net. Another miserable afternoon for the bottom club.

Yet the team directly above them, Frosinone, are showing signs of life, picking up a point at Parma following a 0-0 stalemate. In a game of few chances, the major talking point came on the hour, as Parma’s Leo Stulac was shown a straight red card for an ugly lunge on Raman Chibsah. Frosinone could not take full advantage, but are now undefeated in three matches, closing to within three points of safety.